If you are stalled on a research project, make sure you have a second project with an urgent and immovable deadline coming up soon.

No, seriously, write it down.

In the bibliography to my thesis I quote Walter Benjamin, “The only exact knowledge there is is the knowledge of the date of publication and the format of books”.

(Of course, date of publication isn’t always clear — see Endangering Science Fiction Film with its copyright date of 2016 that I got in 2015.)

Quoting this to other people, it occurred to me I didn’t have the source. Pah.

It seemed likely to be in Illuminations, if only because that’s the book I know best. But could I find it?

A year ago, perhaps reading about Benjamin, maybe for the stuff on special effects and Brecht, I relocated the quote.

But I still didn’t write it down.

Last week I was talking to Rob McPherson about the materials he’s been turning up about pubs and brewing, and I was sat at my iPad, occasionally searching for webpages to clarify details. One of these was from the Canterbury Archaeological Trust and had an interesting quote which I want to follow to its source. There’s a copy of that book in Ashford Library. The quote related to a Canterbury family who either brewed or owned pubs or …

I still didn’t write it down.

By a miracle, the name reappeared in my memory.**

I am the kind of person with a physical memory of the “it’s halfway down p. 222” type, but I should know not to rely on it.

* And ironically it turns out that I actually misremembered that. The quote is “‘The only exact knowledge there is’, said Anatole France, ‘is the knowledge of the date of publication and the format of books'”, complete with a reference. I clearly never thought to check.

** The Flint family, if you’re wondering. The volume is Brief Records of the Flint Family.

It has been an emotional week as the general not-quite-year-end exhaustion continues.

The good news that I’ve been given money to employ a research assistant was rather tempered by having to do it all right now, but initial forays into the archives unveiled a document that required checking out before we could proceed. (I shall write about it here in due course.) The rather convenient idea of going on Monday was upended by the archive’s opening hours and so we ended up there yesterday.

And thus it was not until 2.25 that I hit HS1 for St P. and the Thameslink to Blackfriars to catch the opening of the Tate extension. 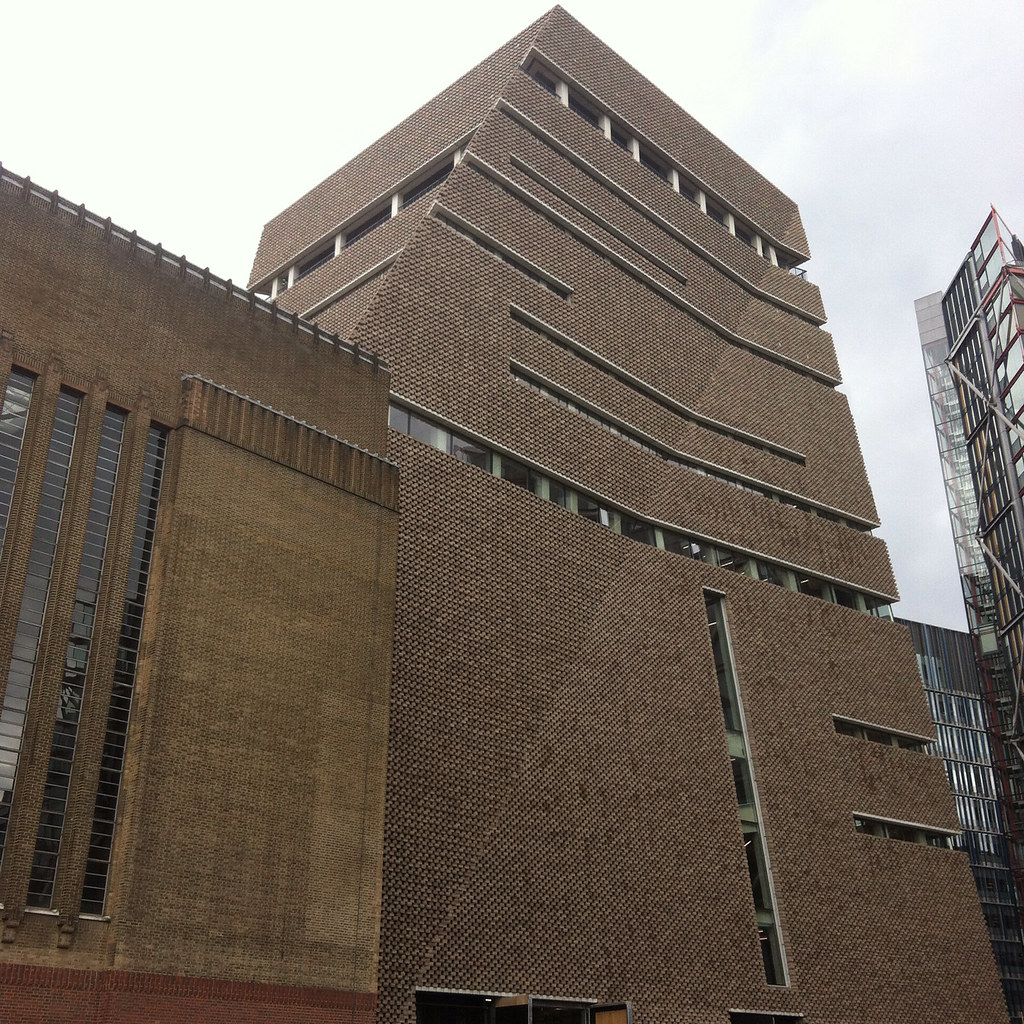 In fact, I got there for 3.50, ten minutes before opening, and joined the queue that was just past the top of the ramp. We shuffled into the Turbine Hall (which I think has Thomas Schutte on display and one of Ai Weiwei’s trees), down the ramp (which may have lost the ghost of Shibboleth, the crack drilled and filled in a decade ago) to the Tanks (a new space open for a couple of months a few years ago).

I’d been sceptical of the development, not so much because of the nature of modern art, but of the damage potentially done to Sir Giles Gilbert Scott’s design. The extension is brick, and clearly no pastiche or imitation, but will take time to settle in. In any case, architectural phalluses have ringed the original footprint, of which more in a second.

My instinct was to go to the viewing platform — floor ten, which has an express lift although initially it could only make it to nine and the stairs. (The interior of the extension has the luxury of swirling staircases. This one is narrower.) And of course, the view is fantastic, 360, across London. I hit a rainstorm, but even so. 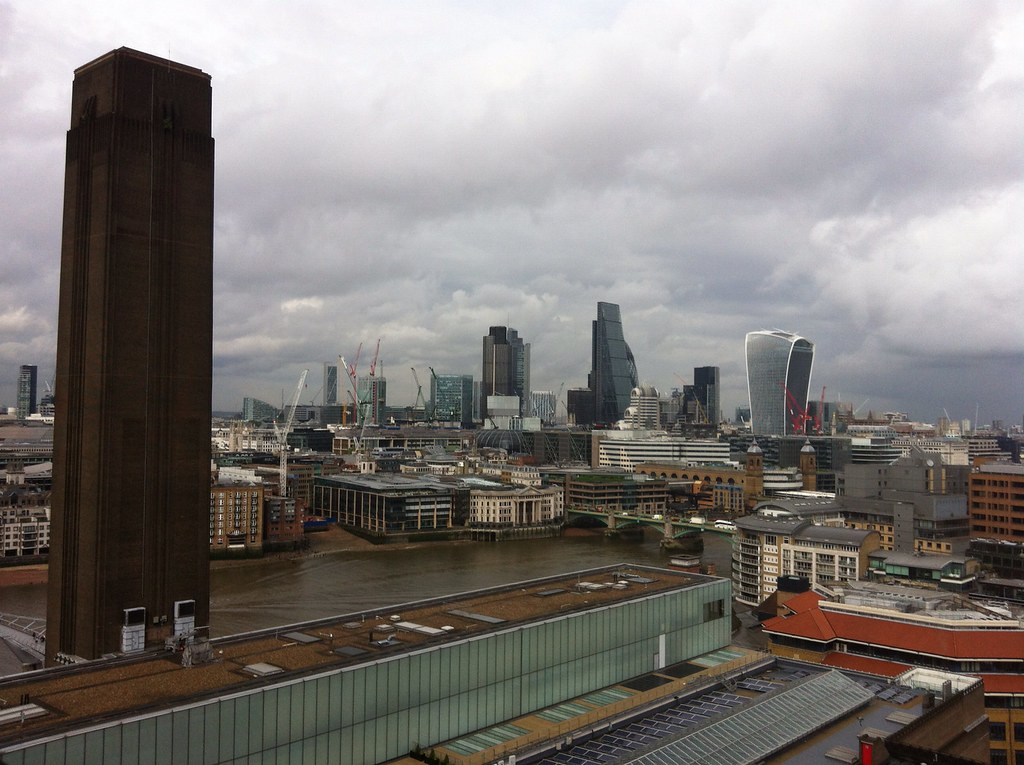 And most amusingly, there are the new flats being built, with show flats that are in Awfully Awfully Good Taste, and may well offer a soap opera. 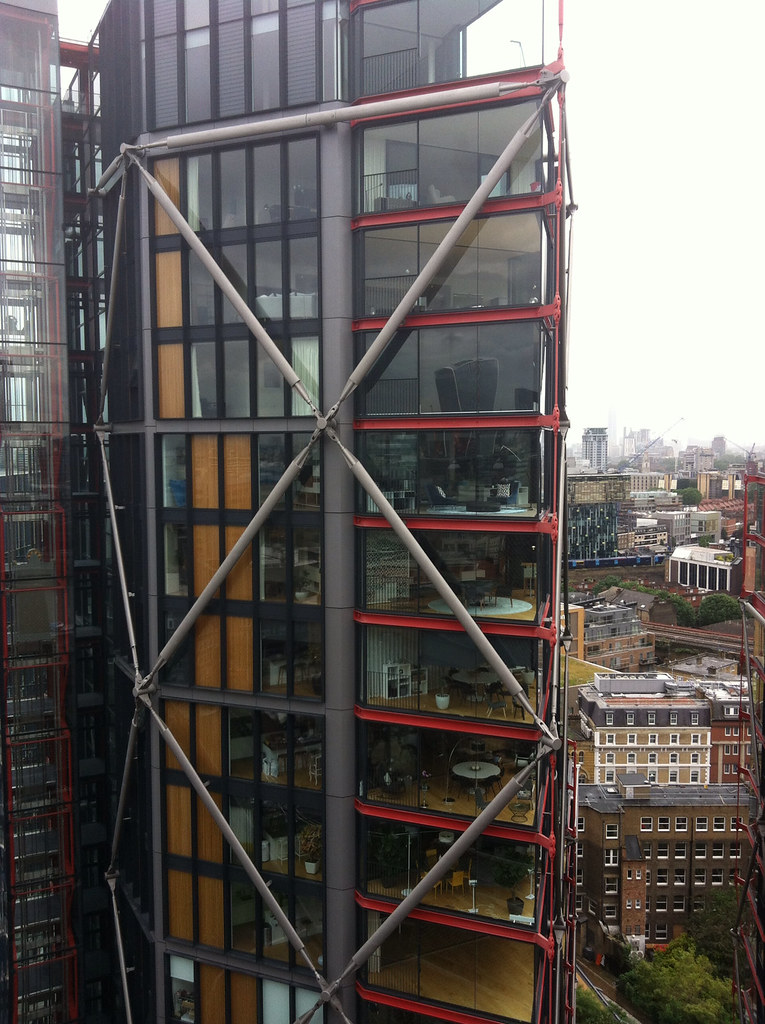 Certainly a lot of sniggers. I assume the blinds will come down.

And then, one says, let’s go do some art. Three floors, mostly geared to the broadly sculptural, and whilst I deliberately slid over the surfaces, very little blew me away. There are rooms I will go back to and linger in, but post-1960 sculpture and performance art is the stuff that perhaps risks bringing out the philistine suspecting the emperor’s tailor.

I think I’ve seen the installation with the beach and macaws at Liverpool Tate, and there, as here, there is a long spiel about the macaws being cared for. I was uneasy.

But the highlight — aside from the City of Couscous — was the Artists Room on Louise Bourgeois. 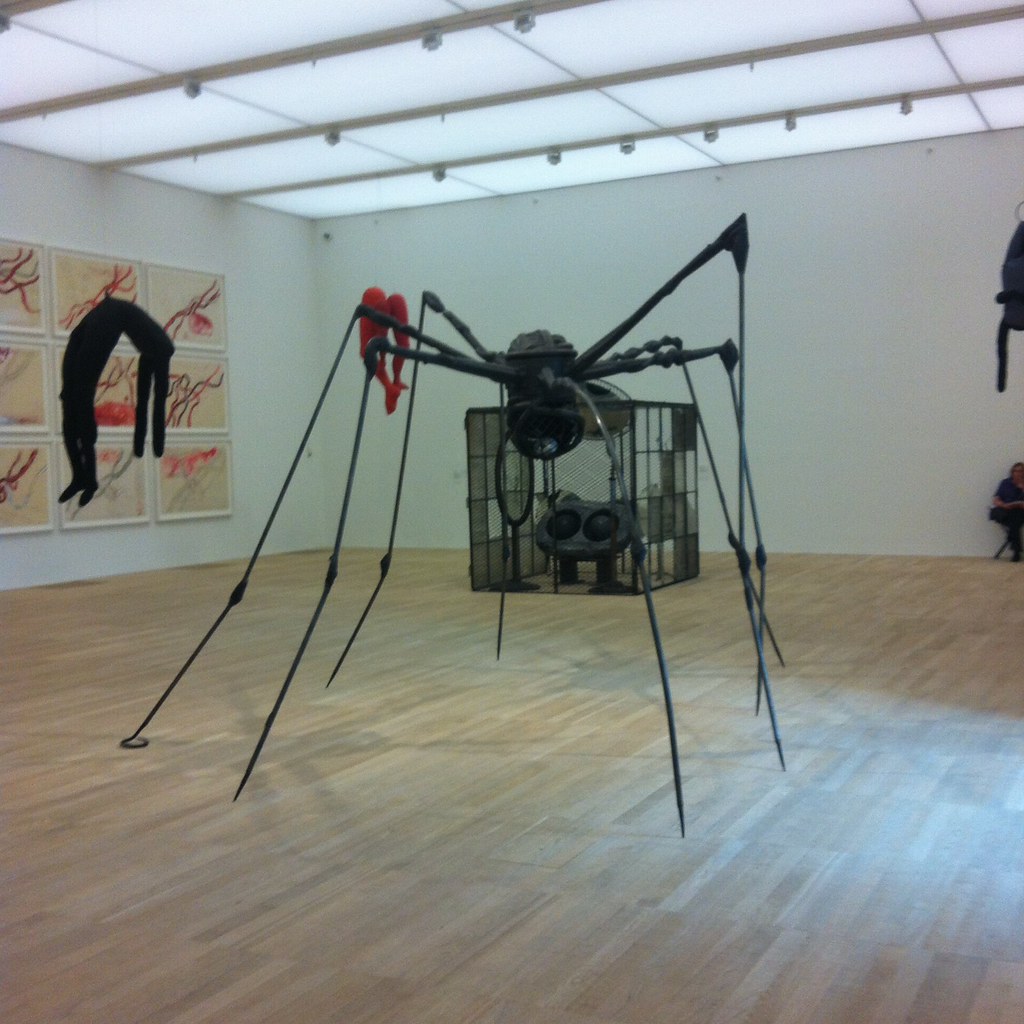 I recall the criticism of the new Tates in 2000 — the division of Britain and Modern into four zones seemed arbitrary and potentially obscuring gaps in collections. Over the years it has come good. I’m sure the same will be true of the new extension.

It’s always good when a piece of work finally appears — I’ve been through research and drafts and edits and proofs and galleys. In here I have a chapter on “The British science fiction short story” (and I mourn my title or subtitle, which was something like “Authors and Editors”).

While the identity of the first sf novel is contested, Brian W. Aldiss’s championing of Mary Shelley’s Frankenstein (1818) provides a useful starting point. Her nested tale of a scientist who fails to take adequate care of his creation cemented an archetype of the genre and demonstrated an ambivalence towards science and technology that characterizes much British sf. Her depiction of the landscapes – of Germany, Britain and the Arctic – also points to an interest in the pastoral and the natural world, under threat from the Industrial Revolution. Her only other sf novel, The Last Man (1826), displays a pessimism and sense of decline that was also to pervade the British form. Shelley’s career was hampered by the politics of her family life; after the death by drowning of Percy Bysshe Shelley she had to borrow money from her father-in-law, Sir Timothy Shelley, against her son, Percy Florence’s, inheritance. Sonia Hofkosh argues that Shelley ‘recognizes an economics of the marketplace, wherein production and consumption are compelled and constrained by publishers, editors, and readers’. She published in the annuals, ornate gift books that contained vignettes, poetry, accounts of the previous year and engravings. The first annual had been Forget-Me-Not: A Christmas and New Years Present for 1823 (1822), but the Keepsake (1827–1857) was more successful. In Shelley’s ‘Mortal Immortal’ (Keepsake, 1833), protagonist Winzy becomes immortal as he accidentally drinks an alchemist’s potion and then watches his lover Bertha as she ages and dies. It is tempting to read this (like The Last Man) autobiographically, with the dead Percy forever twenty-nine and Mary subject to the ravages of time and economic struggle.

There then seems to be a fifty-year gap: ghost, horror and fantasy short stories, but no sf.

I take the story up to Nina Allan and Chris Beckett. It is a sprint.

But some good stuff in the collection, including Paul March-Russell on “Writing and publishing the short story”, period pieces on Romantic, Victoria, early twentieth-century, mid twentieth-century and … plus genres such as detective, gothic and microfiction.

For about a month now I’ve been told that I can put my feet up now.

Yes, the teaching is over, but then there’s the marking to be done and then there’s all the bits and pieces that got lost in transit because essays can be handed in all kinds of places now and every time you think it’s over there’s another one beneath.

… there’s the catching up with work and thus …

… well, I want to do something but I can only find two days in the next fortnight where I can do this.

There’s a pile of reading to be done (remembers something else) and before the end of July I need to write four pieces:


That’s in order of how much prep I’ve already done, but on the other hand that’s about eight films to rewatch and mull over for the last one.

I can probably hide from Quest for Love, but I applied for QR funding for that one and — well other bits of research got in the way to use that do I feel duty bound to finish before the end of the academic year.

And meanwhile I’ve been given some money to employ a research assistant on the beer stuff and I really have to visit an archive with him before he can go much further. And there’s only two days I can do that in the next fortnight. And of course there’s things I need to read to know where to send him next.