I tried to find the bridge (Bridge at Courbevoie (1886-87)) on Google maps but failed — the river Seine, the bridge, a distant factory, trees, fisher men, walkers. Georges Seurat’s brand of Post-Impressionism, pointillism, made up from coloured dots, half way between colour printing and cathode ray tubes. In another place, Roy Lichtenstein was to enlarge dots and make pop art of comics.

Deliberately, if annoyingly, the copy and original hang either side of the doorway, challenging you to find a viewpoint from which they can be compared. You carry the memory of one to the other.

Bridget Riley may have seen the painting at the Courtauld – I presume it was at the Warburg Institute, Woburn Square in 1959, having recently moved from Portman Square? — but instead it struck her in R.H. Wilenski’s book on Seurat and she then decoded to paint her own version. It’s bigger, of course, but then the book may not have been clear how big the original was. I think she knew, really, so decided to make the dots larger, and so the intensity of the original is pushed even further from photorealism. The sky is curiously yellow, matching the colour in the water and the grass. He creates light from colour and that seems to be what fascinated Riley.

If the colours become abstract, then so do the shapes — triangles, poles, lozenges, anticipating Riley’s move from stripes into something more… foliated. The Lagoon paintings, for example.

And then, on an opposite wall, Pink Landscape (1960), the shimmer of summer heat in Sienna represented by dots of red and green and pink and orange and blue, and a child’s farmhouse of white walls and a red roof. The shapes of the fields form lozenges.

Wilenski writes of Bridge that “The little man in the bowler hat has missed his train back to Paris and will be scolded by his wife; the child will be late for tea and spanked, maybe, by its mother.”

But we would lose the narrative in Riley as the pinstripes become stripes.

Here we’re offered variants on stripes — Late Morning I (1967) with green and red and white and blue stripes insisting on length and direction, the vertical, Vapour (1970) with white, brown, purple, green stripes overlapping, question the plane and Ecclesia (1985), thicker stripes, taking on volume.

But Tremor (1962) draws the eye — black and white triables that also form curves and ribbons and you swear the painting rotates in front of you.

A painting approximates reality through strokes, dots, stripes and the pointillist returns it to dots. Riley’s insight was to occupy the geometry, to chase the relation of shape, in canvases that move both optically and emotionally, to create luminence.

Stand still and look at the flat square.

Look at the plane.

Slowly, inevitably, against your will, it begins to move. To dance, to ripple.

You look away and there’s still an after image.

There’s no doubt a scientific explanation about the limitations of vision and the brain filling in the gaps – we can’t separate the white from the black or (later) the green, blue, grey.

Riley’s curve paintings began with a black square, which seem to be everywhere at the moment. Malevich and all that. But she wasn’t happy – it didn’t express her failure as an artist enough.

So an experiment led to a circle and a square, Or rather a rectangle. The Kiss (1960).

And from that she got to her curve paintings – some black and white, others using greys, some playing with blue and green and red and grey. Take Cataract 2 (or 3, because I can find a picture of that one) and see how it refuses to lie flat. Cataract 2 is more like an arrow than this – note the stripes aren’t parallel, are offset.
In one room we see a wall of preparatory sketches, many of them on graph paper, and we consider how carefully the abstract must have been arrived at.

And then, in 1980, she stopped. She moved onto vertical lines.

But they didn’t vanish forever, as in 1997 there was a return. Lagoon 2 widens the vertical stripes and interrupts them, if not with curves then with segments of circles. The vertical lines are further disturbed by diagonals. In the area given to studies, we see variants that led to this and similar designs – trying out colours, rearranging segments, working on graph paper and tracing paper. “Lagoon” points us to something more organic than maths, something away from the abstract.

“The relation between the line and the curve can be compared to that between the circle and the oval,” she says in an interview. But it also breaks the apparent flatness of the plane.

The most recent piece in the exhibition I think (despite that 2014 date) is a wall painting, Rajasthan (2012) – red, orange, green, grey and the white of the wall. There’s not the same sense of the breaking of the plane, but there’s the breaking of the frame. Given what I’m currently reading about the (American?) battle between the wall and the easel, this feels timely. 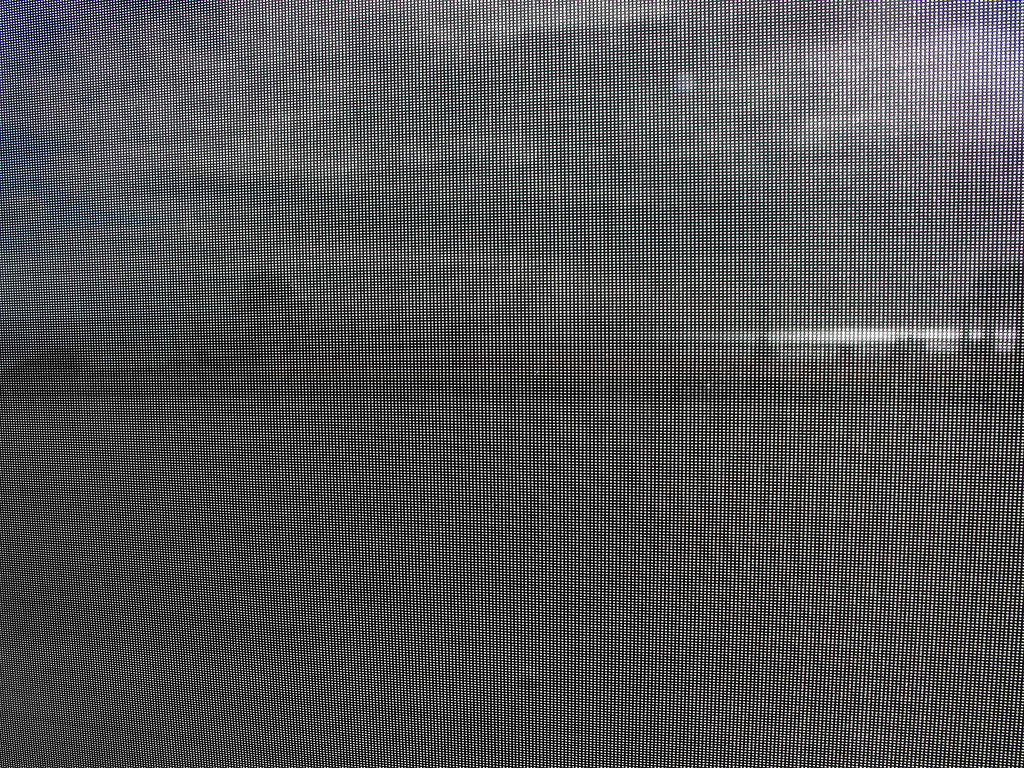 Bexhill’s De La Warr Pavilion is one of my favourite galleries – and in conjunction with the Jedward Jerwood makes a splendid day out. Indeed, although the effect may not work here, I’ve looked at the light-reducing blinds before and thought of them as op art. The Art Deco curves of the building seem to speak to Riley’s curves and the seaside setting seems to speak to some of those curves as sticks of rock (and I’m not entirely joking about the deckchairs, although none were on show here). It is a show to surrender to – even as it takes you over.

This is, ish, very ish, the fiftieth anniversary of the second wave of British Pop Art and the University of Kent, and so Pop Art has decided to mark this by having three universities.

Ah, sorry, my mistake, the University of Kent have three exhibitions – one on campus, which I presume they didn’t feel the need to tell anyone about as I missed it, one on Paolozzi and Tony Ray-Jones, which I’ve written about for Foundation, and A Marriage of Styles at Mascalls Gallery. This gallery has a rather good exhibition policy, but it is a l-o-n-g mile’s walk from Paddock Wood station (thankfully on the flat) and is at a school, so I’ve not been as often as I’ve wanted to. I caught this show on the penultimate day and I’m so glad I did. I should note, also, that there are current two rooms at Tate Modern specifically devoted to Pop Art, even though you’d think that would be at Britain?

So what is Pop Art? Well, the word Pop was used in a slide by Eduardo Paolozzi at his presentation Bunk! at the inaugural meeting of the Independent Group in 1952 and Lawrence Alloway in 1958 was to apply it to art that drew on the visual language of advertising, comic books and everyday life, breaking down boundaries between high and low art. In the US, you’d put Andy Warhol and Roy Lichtenstein, who clearly pointed the way for the next generation of British artists, who were mostly at art college in the early 1960s. But if Pop Art constructs a reality through actual or implied collage, these artists were also influenced by more abstract, non-representational, images.

The Paddock Wood show had eleven paintings – I’m guessing one for each member of the the 1966 English worldcup football team – in its two rooms, mostly one to a wall. I’m going to talk about them one by one, mostly from my notes scribbled in the gallery. END_OF_DOCUMENT_TOKEN_TO_BE_REPLACED