This is, ish, very ish, the fiftieth anniversary of the second wave of British Pop Art and the University of Kent, and so Pop Art has decided to mark this by having three universities.

Ah, sorry, my mistake, the University of Kent have three exhibitions – one on campus, which I presume they didn’t feel the need to tell anyone about as I missed it, one on Paolozzi and Tony Ray-Jones, which I’ve written about for Foundation, and A Marriage of Styles at Mascalls Gallery. This gallery has a rather good exhibition policy, but it is a l-o-n-g mile’s walk from Paddock Wood station (thankfully on the flat) and is at a school, so I’ve not been as often as I’ve wanted to. I caught this show on the penultimate day and I’m so glad I did. I should note, also, that there are current two rooms at Tate Modern specifically devoted to Pop Art, even though you’d think that would be at Britain?

So what is Pop Art? Well, the word Pop was used in a slide by Eduardo Paolozzi at his presentation Bunk! at the inaugural meeting of the Independent Group in 1952 and Lawrence Alloway in 1958 was to apply it to art that drew on the visual language of advertising, comic books and everyday life, breaking down boundaries between high and low art. In the US, you’d put Andy Warhol and Roy Lichtenstein, who clearly pointed the way for the next generation of British artists, who were mostly at art college in the early 1960s. But if Pop Art constructs a reality through actual or implied collage, these artists were also influenced by more abstract, non-representational, images.

The Paddock Wood show had eleven paintings – I’m guessing one for each member of the the 1966 English worldcup football team – in its two rooms, mostly one to a wall. I’m going to talk about them one by one, mostly from my notes scribbled in the gallery.

David Hockney, The First Marriage (A Marriage of Styles I) (1962)

This is the painting that gives the show its name – and indeed the Hockney retrospective I saw in Nottingham at the Contemporary. There’s a man in a suit and an Egyptian woman – although I read her as a Native American to be honest. As elsewhere in early Hockney there’s raw canvas too, drawing attention to the act of painting. What strikes me so often in the show is that so many of the paintings declared themselves to be paintings – although at one point I was counting how many of them had frames (three, I think). Hockney, with Blake and Jones, is for me the king of sixties British pop art, although it is a little hard to see it here.

One of those artists I hadn’t realised I’d seen before (he’s a John Moores prizewinner, so I’ve seen one at the Walker), who apparently went for the neutral square as his composition. I can identify with this, as I started taking photographs as squares, aft a period of taking landscapes as portraits. There’s the blue strip dominating, friezes which decorate, something that looks like a planet and a floating shape. This wasn’t clear in the flesh, but I can’t help but reading it as a duck… 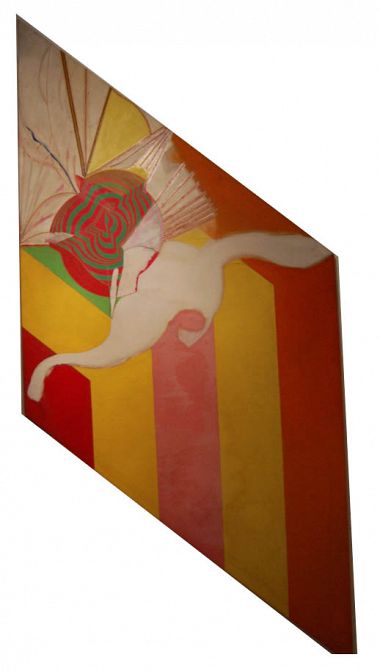 From square to kite or lozenge and from duck to swan. I asked myself which way up the swan is on seeing the painting and I still ask the question as the painting was hung in the exhibition with the quiver and arrow to the right rather than at the top. This is doubly ironic, since I recalled D.H. Lawrence’s banned painting Leda and the Swan, which looks more or less violent according to whether it is portrait or landscape. There’s a conflict between rigour and poetry I’ve noted – if I remember rightly Bowling did drip (dribble?) where the wet paint covered the canvas.

Patrick Caulfield, View Inside a Cave (1965)

So we have two shades of grey and sharp black lines, which conjure perspective into visibility. This is extraordinary — Caulfield is one of those instantly recognisable painters, who tends to paint a simplified object in a bright colour against a plain background. Here the colours are muted and – reading the attached referencing Hergé – the reference is presumably to comic books in this case. There’s an artist whose name I can never remember who specialises in empty canvases – he did a whole comic book without characters, animated a desert without Roadrunner or Wile E. Coyote – and I wonder if Caulfield influenced him?

Another square painting but at 45°, and movement and depth created by black and white lines. There are a few artists – Patrick Hughes and Anish Kapoor spring to mind – where you watch then as if you are stood on a deck of a ship. You sway, to let the painting work its magic on you. Let your eyes unfocus, and watch the colours dance. Op Art classic. More on her later. More op art – stripes or ribbons of colour, vertical across the canvas. The picture is off square, with a bit taken out of it. Reminds me of Sol de Witt, although I’m not sure who came first. I think I prefer de Witt – and Riley’s coloured work.

An artist I’d never heard of, who apparently pioneered computer art. This is a huge canvas, with nets, ribbons, swirls, a blue shape… Fascinating to see the pattern-finding brain at work on the abstract here – it almost feels like a Mercator projection map of the world. Or that blue shape – is it a blue woman, á la Matisse cut-outs?

I love Hodgkin’s colours – I remember going to a room at the Tate with an eightieth(?) birthday tribute show after the Pre-Raph exhibition to clean a cloyed palette. Curiously, this is not entirely abstract (so does that make it Pop?), being a postwar of a dinner held by Harold Cohen’s brother, Bernard. The white stripe, which insists on the canvas plane, is the edge of the table, and then you can pick out the diners. Handsome looking lot, ain’t they?

This is a rather muddy picture – calling it bland is a brave thing, but frankly it is. I read it as a map or a diagram, but note the frames within frames. I don’t know Denny’s work, and do not feel inspired to seek out more.

A third name new to me and I don’t recall seeing this at the Towner. Ribbons painted on screens, and note how it breaks out of the rectangle and thus beyond the (lack of frame). Quite striking in reality.

A few months back I saw Jones and Kiefer retrospectives at the RAA and was in desperate needs of a counter to paintings about sexism and racism, although the colour of the former balanced the monochrome (monobrown?) of the latter. Jones’s work slides along that lines between being about and simply being – let’s demonstrate the horrible objectification of women by objectifying them. I’ll read the catalogue to that show and come back, honest. pathway is an eye within a mouth within a mouth, with either a long tongue sticking out of it or an alimentary tract or gut behind it. The canvas, like Hockney’s, is visible, with the underdrawing showing through as well. Again, we have the sense of painting as painting rather than representation, and the plane is broken with a shelf protruding from the bottom of the painting. We come full circle – whilst we see this is most obviously Pop, it could easily be an album cover for a prog rock album.

This was clearly an extraordinary generation of artists, and when I think of the next Significant Generation twenty-five years later, the YBAs of Hirst, Emin et al, I’d go for Hockney, Caulfield and Riley every time.