I wonder when we first associated art with madness? Perhaps the cave painters were seen as magical because of perceived links between bison and lunch. Certainly by the time of the Greeks we get all the stuff about muses and possession. We are fascinated by Blake and his angels and Syd Barrett and his madcap laughs and Spike Milligan and his depressions.

In the early to mid-nineteenth century we have mad poet John Clare and mad painter Richard Dadd.

Dadd was born 1817 in Chatham to a father who was clearly an intellectual mover and shaker, involved with the local philosophical and literary society. But they moved to London, specifically to Sussex Street, just around the corner from the Royal Academy of Arts (pre Somerset House days and pre-Burlington House presumably), and little Richard began to train as an artist. His reputation seems to have been made by a painting of Puck, a large child-like figure sat in the centre of a round picture in front of a crescent moon, with smaller fairies dancing around him.

He was commissioned in 1842 to travel with former Newport mayor and barrister Sir Thomas Phillips (1801–1867) on a grand tour, painting his way in Greece and Egypt and the Holy Land. There is a stunning picture of a campfire in the desert, a stripy blue sky, and, most curiously, the moon pierced on the top of a lance, although this is thought to have painting after his return. The painting, The Artist’s Halt in the Desert (c. 1846), disappeared into private hands, only to be rediscovered on The Antiques Road Show in the 1980s.

By then, Dadd’s mental health was already deteriorating — perhaps due to the heat, perhaps due to the exoticism, perhaps due to an existing condition. He was sent home. Back in England, whilst on a walk, he murdered his father and escaped to the continent. He might have escaped, but on the train he tried to kill two of his fellow passengers. He was overpowered and arrested and sent to prison in France for a year. In time he was deported to England, where he was put on trial but was declared criminally insane. For two decades he was incarcerated in Bethlem, then on the site of what was to become the Imperial War Museum, before being moved to the newly built Broadmoor where he died and was buried in 1886. As Nicholas Tromans points out, his period in the asylum coincides with the Foucauldian epistemological break of the regulation of mental health by doctors, and the growth of case records.

Whilst in the asylum, he was allowed to paint with greater or lesser freedom and resources, with one of his physicians, Charles Hood, becoming a collector of his work. This was partly therapy, partly because Hood was a connoisseur. There is a picture, Portrait of a Young Man, which is thought to be a portrait of Hood in an imagined leisure garden at the asylum; on the other hand there is a satiric piece The Curiosity Shop, which features a “connoisseur” looking at a picture through binoculars. Was Dadd playing games with Hood? Meanwhile he produced a series, Sketches to Illustrate the Passions — hatred, agony/raving madness, Ingratiation or self-contempt, deceit or duplicity, anger, grief or sorrow and patriotism — that seem to be a diagnostic set of mental conditions. The latter features two elderly military types, smoking pipes, in front of a map “A General Plan of the City of Olabolika” and a plan in incredibly tiny print.

All of these pictures are on display in this Watts Gallery exhibition, but that is to get ahead of ourselves.

The first painting on display — next to the room of Wattseseses — is The Fairy Feller’s Master Stroke (1855–64), arguably Dadd’s masterpiece, which at one point was the property of Siegfried Sassoon, but gifted to the Tate in memory of Dadd’s great-nephew, who died in the First World War. Tromans seems to suggest it was inspired by the Queen Mab speech from Romeo and Juliet, or not, and it is full of scores of tiny figures, with the titular fellow raising an axe at the emotional centre. Dadd worked on it for twenty years and it seems unfinished — there’s canvas showing beneath the fellow’s feet with the underdrawings visible. To one side of the canvas in the gallery a notebook, from the Bedlam archives, includes Dadd’s explanatory poem, “Elimination of a Picture & its Subject — Called the Feller’s Master Stroke”, in increasingly tiny print.

It’s great. A masterwork. Possibly it’s in that room for security reasons, but I think it’s a mistake to begin with it in two ways. For one thing, the rest of the exhibition risks being a let-down. For another thing, a second fairy painting, Contradiction: Oberon and Titania (1854-58), which is now in a private collection, once hung next to it and it is a shame not to have the two side by side for comparative purposes. The latter is an oval painting, again the work of decades, featuring the disturbed nature and overlapping seasons thanks to the argument of Oberon and Titania. Again, a painting that repays long study. 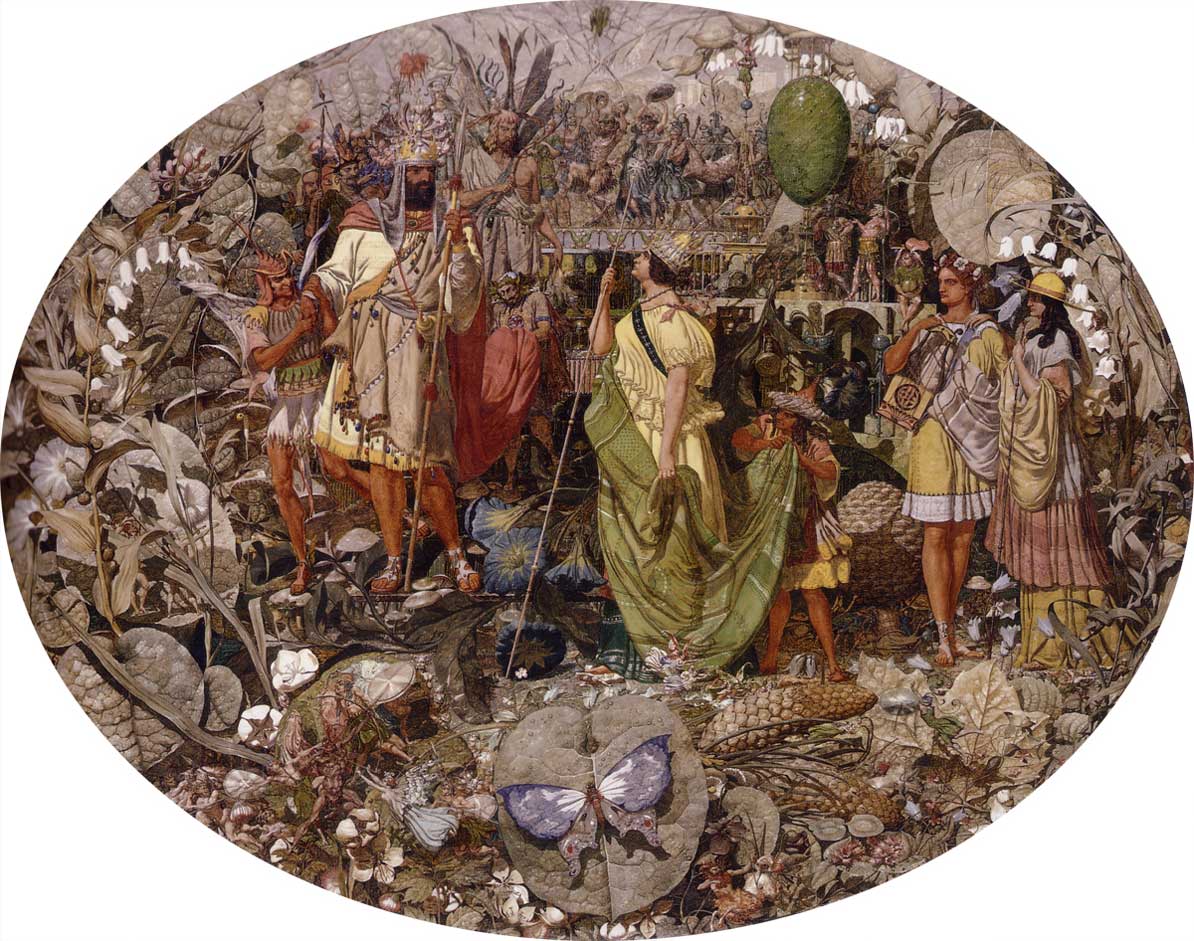 Instead there is another painting near the Fairy Feller canvas, Bacchanalian Scene which, like the Fairy Feller and Contradiction, has its figures half obscured by vegetation. This one has three faces in close up, one drinking from a cup, which has an inscription about dæmons. This seems to be part of Dadd’s belief that we are fought over and controlled by spirits — just as Dadd thought he was when he killed his father. In fact, Dadd apparently believed that his real father was the Egyptian god, and that Robert was an impostor.

The dark side of Dadd’s madness must not be forgotten or over romanticised and his experiences in the asylums were probably better than many other people’s. The true nature of his illness — these days assumed to be a form of paranoid schizophrenia, a diagnosis several decades in the future — was not understood at the time, and perhaps he could have had better therapy and, had they been available, better medication. His work, incredible as it is, seems dominated by watercolours, a form I suspect is respected less than oils.

Despite the awkward layout, this is probably the most significant exhibition of Dadd’s work in forty years (and perhaps is the ghost of an exhibition announced at the Dulwich Picture Gallery, but abandoned for lack of funds).