Joanna Russ’s How to Suppress Women’s Writing is a blistering anatomy of the ways in which critics dismiss female authors. I suspect the same is true in the way we treat female artists. So many of them are just plain ignored, not part of the history, whereas others get related to more famous (artist) husbands. The recent Barbara Hepworth exhibition at Tate Britain is a case in point — the juxtaposition of her work with Ben Nicholson’s (much as I like him), risks privileging the influence in one way.

The muse is female.

And so we come to Georgia O’Keeffe (1887-1986), who I in my ignorant way had assumed was just a painter of flowers (see also Mrs Delany with her collages and Winnifred Nicholson). And those flowers were, well, obviously, yanno, well, um.

If the pen is the penis, then the paintbrush might as well be a, um.

What should be immediately clear from this exhibition — too big an exhibition I suspect, as is often the Tate Modern way — is that there is much more to her flowers and indeed they form a tiny part of her output. Even, perhaps, the least interesting part.

She’s born in Wisconsin and moves to Virginia, but comes to the attention of photographer and curator Alfred Stieglitz, undeniably a fine photographer. He’s married, but tempts her across to New York and shows her work in the 291 gallery he owns.

Not only that, but he takes photographs of her — not all nudes, but a goodly deal of the ones on display were, close in on breasts, torsos, stomachs, belly button and genitalia. Great photos, yes, but a woman dissected for our pleasure, and apparently he’d done much the same to Katharine Rhoades (1885/1895-1965), also a painter.

O’Keeffe’s work is largely abstract at this point — vertical ribbons of colour with curves or diagonals cutting across them. I always find myself in a Rorschach inkblot diagnosis with abstract, narrativising them perhaps, and you can read them as curtains (a domestic space) or even as legs or …

A painting such as Grey Lines with Black, Blue and Yellow (c. 1923) was in fact a response to head of the Teachers College, Columbia University, Alon Bement playing music, and a lot of these paintings seem to be responses to music. Meanwhile, another of Stieglitz’s protégés, Paul Strand is mixing street photography with photos of objects flattened into abstract patterns of black and white. Stieglitz was to turn more abstract and photograph clouds as part of his Equivalent States series — a homage perhaps to John Constable, but also an influence on O’Keeffe’s trajectory.

As Stieglitz and O’Keeffe set up life together, in a circle that included Paul and Rebecca Strand, John Marin, Paul Rosenfeld, Marsden Hartley and Dorothy Norman, the hunt was on to find a distinctly American artistic voice, a means of responding to New York, although the two aims were likely incompatible, at least for O’Keeffe. Strand went about it by sneaking photos of the passers by, but also with almost abstract images of commuters walking past Wall Street buildings. Marin produced a stunning painting of Downtown New York, whereas Stieglitz took photos from the various apartments in skyscrapers they occupied. O’Keeffe painted the skyscrapers at night, often from street level, but also elevated views across the city — Untitled (New York) and East Pier No 3 show the river, the factory, the cranes and derricks and a single church spire. It’s like an L. S. Lowry, although just predates them.

They had a holiday home at Lake George, where he took photographs and she painted (Strand took a great photo of a baby buggy there, but felt he was trespassing on another man’s territory.) O’Keeffe’s landscapes of the lake are almost symmetrical along a horizontal line, the hills and mountains reflected, the composition tightly cropped like a photo. There she could also paint flowers, the Jimson weeds, pansies, iris, poppies, huge, overblown, but almost cropped.

We might associate flowers with the feminine, although it was Blake’s rose that was sick, along with nature and domestic spaces, but we mare projecting. I don’t think that there is a single painting of a human being in any of the paintings on display here — her A Man from the Desert (1941) is presumably a scarecrow. There’s Lake George, Coat and Red (1919) which may include Stieglitz’S black cape with a red lining, but he’s not there. The body, that abject definition of the female, is absent and so perhaps we project that onto the canvases. Taking our cue from Stieglitz and the early reviews of her work, she is painting anatomy but sublimated. Clearly those flowers are —

I mean, I’m not exactly a connoisseur, but I think that reading takes a great deal of squinting, even if some feminist art critics seemed to follow that up. It seems a way of making her interesting whilst dismissing her; the paintings aren’t quite proper. Stieglitz as patron, editor of the journal Camera Work, boyfriend and husband, was managing her reception. O’Keeffe was to deny the interpretation and, despite the fact that she might not be best placed to perceive her own unconscious psyche, I’d take her at her word.

A wider world was calling. Strand takes her up to Canada and she paints Nature Forms — Gaspé (1932), landscape as abstract, a storm in a spiral, full of flow and power, blurring sky, sea and land. It’s sublime rather than frightening. And she follows Hartley down to New Mexico, where a wealthy woman on her second husband heading to her third, with an unlikely collection of surnames, Mabel Dodge Luhan, is collecting artists. The land is red and yellow, to my eyes barren and sterile, but I suspect to her utterly fertile. The churches and other buildings are made from clay, adobe, there’s a church that might date back to 1000AD (which definitely gives me pause). It’s a landscape carved out by indigenous people and Spanish colonisation and… she finds America.

Someone said that New York is not America, but an island off the coast of America. For O’Keeffe the authentic America is west of the Hudson River, into the south west, what she calls the Faraway.

Ansel Adams is documenting the people and the buildings in photographs, and snaps a few of her too. She’s a whole woman, even if she seems to be masquerading.

There are few flowers here, but there are lots of bones. There are deer skulls, mule skulls, and so forth, in European art language part way to a memento mori, the mutability of life, or part of a Dalí-Esther surreal juxtaposition of the skin beneath the skull. The juxtaposition of a white skull with blue and red stripes points toward an American symbolism. For O’Keeffe, the bones were more alive than the animals that they were once part of, they were solid rather than surreal. It’s hard to shake off the echoes, though, as a skull of a ram reminds me of the very European Herne the Hunter. But then there’s Mule’s Skull with Pink Poinsettia (1936) and From the Faraway, Nearby (1937) itself, stunning works, seizing control of scale and perspective. 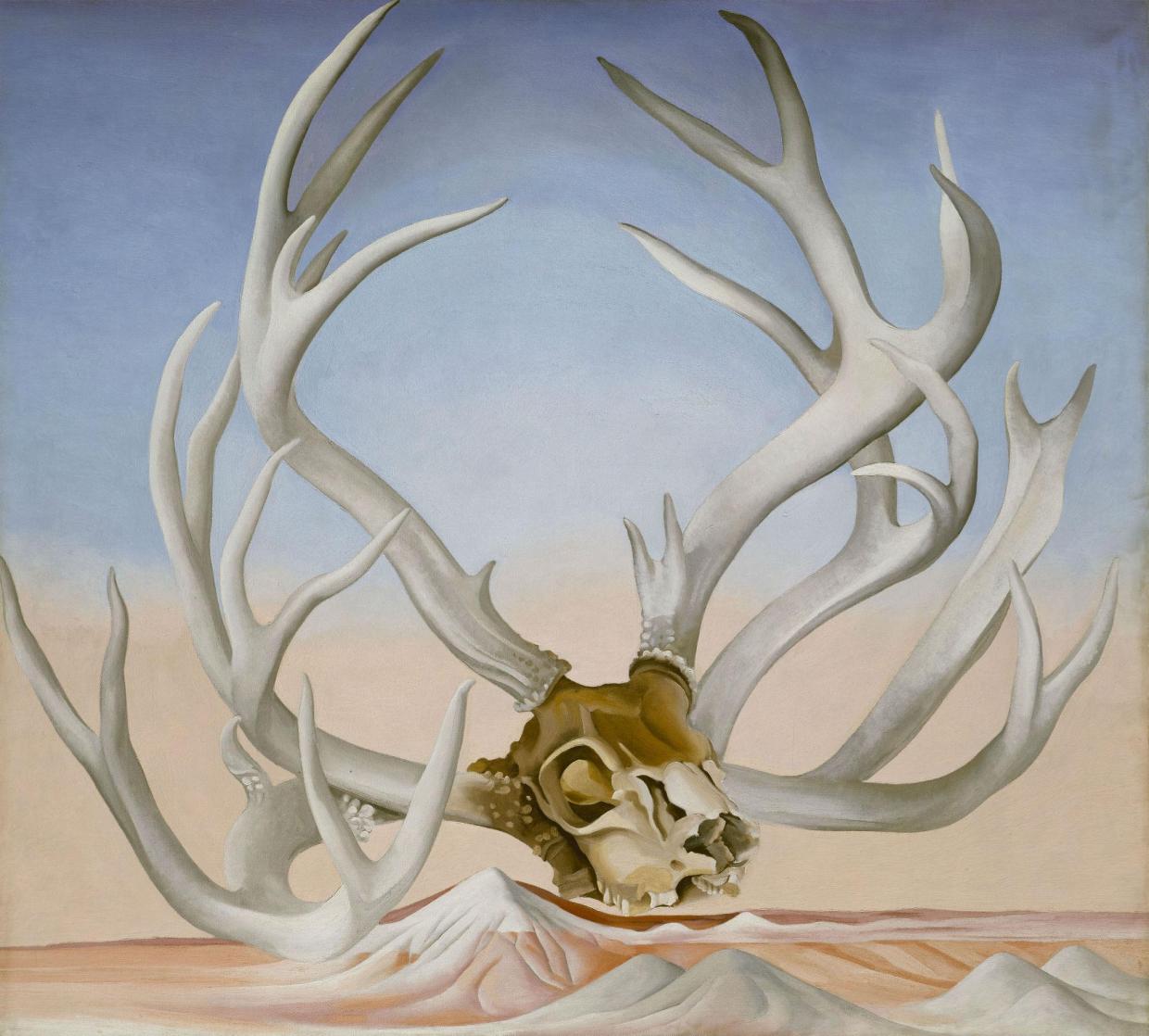 Stieglitz is clearly trying to keep control. She decided to ship a barrel of bones back East, but Stieglitz co-opted them, photographing her hands and a skull before she could paint them. He tried to keep his territory marked.

I’m unconfortable saying he’s a villain, probably because I like his work, but still. And from all accounts they remain in love even if she is moving away (and he toward Norman). Driving away, even.

At least this time it is her hands.

She’d rents a place in Alcade, New Mexico, and finds a new landscape of interest, a set of limestone cliffs in the Chama River Valley near Abiquiú, known as the White Place, and in 1934 spends time at the Ghost Ranch, where she finds a rock formation that becomes known as the Black Place. She paints both locations, along with the ranch, repeatedly, although the exhibitions focuses more on the black than the white. Here we have clefts and vertiginous heights, again hinting of bodies and buttocks and, well, maybe, but it is a stunning set of works that continue into the Second World War.

Eventually she buys the Rancho de los Burros on the Ghost Ranch, because of the views from the patio, and an inspiring door in the wall in its courtyard. She is to return to this door — an echo of a teaching exercise she had set decades before about the use of painterly space: draw a square and add a door. Domestic space becomes abstract — in at least one painting, My Last Door (1952-54) becomes almost a Malevich black square on a terracotta background. She is also painting the cottonwood trees and the blue skies — a return to skies — viewed through holes in the bones. Oddly the bones are flattened — white with grey — with an almost concave sky visible in the space.

She is returning to her earlier abstracts, with vertical stripes disrupted by diagonals and smoke, such as Blue I (1958) and Blue II (1958). I want to read them as the sky viewed through drapes, but I’m domesticating them again. And then there are the paintings of native, local culture.

She has also seen this landscape from above, from a plane, and she paints this new perspective — desert and plain and sky. Sometimes it looks like airbrush or acrylic, even though these are oils, Rothko as landscape, but it is her own language. Stieglitz had died in 1946, and she was definitely her own artist now.

The exhibition leaves her in the 1960s, although she has a decade of painting left, with failing eyesight and health. Like Hepworth, we don’t see the physical decline.

There is no need to sexualise her and there is no need to make special pleading for her as a woman painter. She is an artist. She made deals, she negotiated, she is more than “just” the flowers. And this show depicts her in a wealth of detail.