Limping through the undertubes a couple of months back, I was struck by a poster of a painting of what I took at first to be a marigold, but turned out to be a young woman in a dress. FINAL WEEKS it proclaimed, but I’m not convinced that it gave a closing date. I think I’d gathered it was at Leighton House, a venue in Kensington that was on my radar to visit.

And then I forgot.

A friend went to see it, it was his favourite painting. I paid attention. I plotted. I planned to visit it on a Tuesday, my research day.

So I postponed an idea of Eastbourne, and decided to combine this with a trip to the RAA and Russian and American art, and navigated via a Caffe Nerd and attempting to remember what the Design Museum on High Street Ken looked like when it was the Commonwealth Institute. It wasn’t yet June, but was about the first sunny day in a while even if I sat outside in the shadows at Nerd. And eventually getting there, and one of those slightly weird negotiations of what are the rules for this exhibition?

In my limited mental picture, he was part of the Pre-Raphs, of which I’m not exactly a fan despite their supposed radicalism (which now looks like a box of fudge waiting to happen). I vaguely remember his paintings coming back to the Tate after an absence (to where?), but I couldn’t picture any. No good, eh? He clearly got lorded, and I vaguely assumed he was an ascendant of someone who taught me.

Anyway, the woman in orange, although popular fiction would call her The Girl in the Flaming Dress, one of five paintings Leighton prepared for the Royal Academy summer exhibition, as he was in the final months of his life. I think one of them has gone missing, as has the one he substituted for one he didn’t like at the last minute.

And apparently it was amazing we have this.

It didn’t sell at the show and was bought by The Graphic to be turned into a print to give away in Christmas 1895. After being shown in their office window, it was loaned to the Ashmolean and dropped out of sight — I’m not the only one to be unimpressed by Victorian confectionary. It turned up in Battersea, boxed in over a chimney, and was nearly bought by a young Andrew Lloyd Webber (make your own snide comments). A Puerto Rican industrialist, Luis A. Ferré, partly in town to buy art for his gallery, saw it in The Maas Gallery, London in 1963 and paid £2,000 for it. Since then, it has been at the Museo de Arte de Ponce, aside from rare loans to other galleries 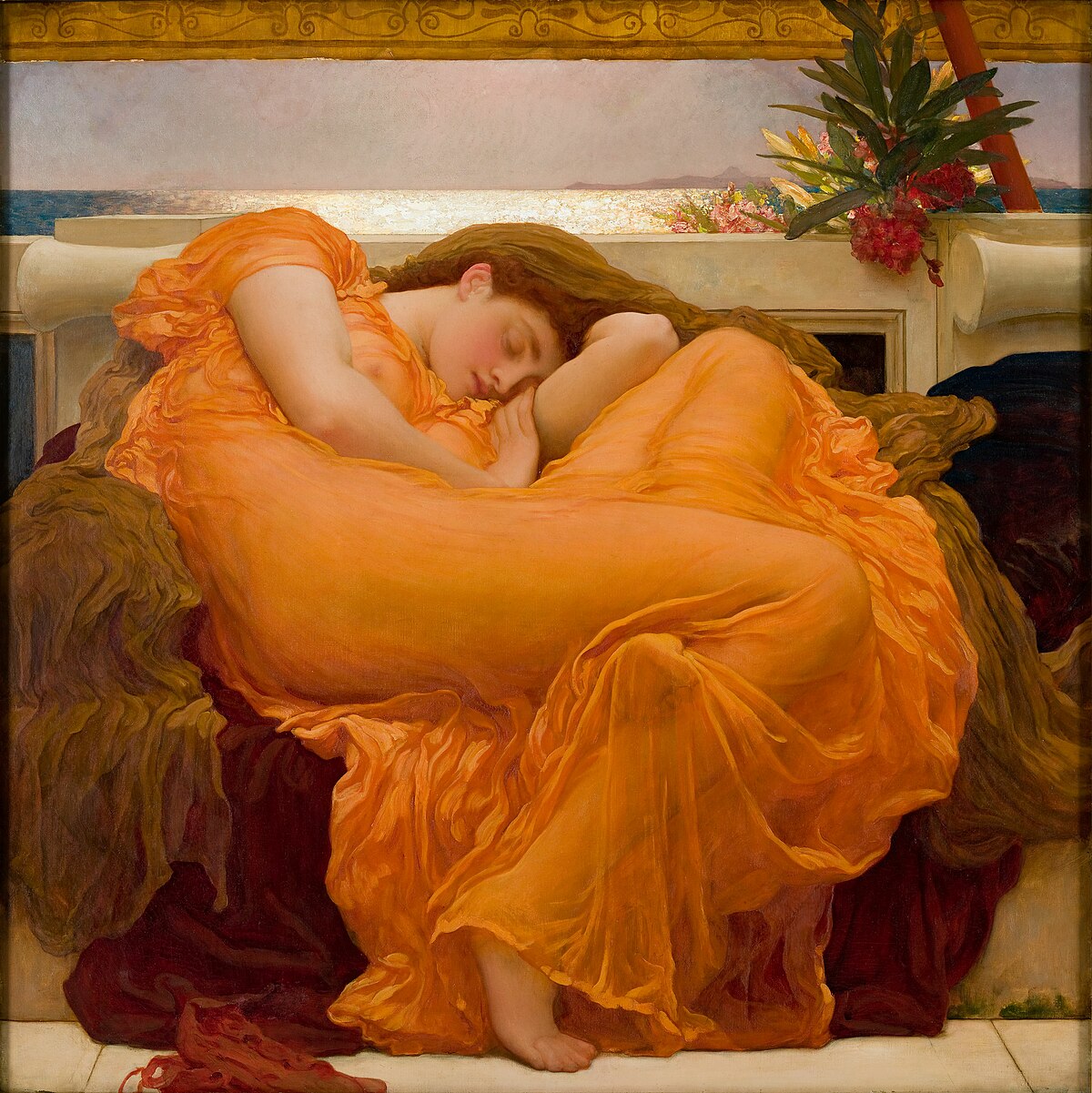 So we have a woman in an orange dress, curled up almost in a circle, an oleander plant to her top right, a shining sea behind her, and draping cloth around her. It is undeniably attractive, with a striking horizontal line of her leg parallel to the golden frame, the ledge and sea, with a zig zag of her lower legs and arms, an almost circular composition. If you look carefully — and of course you do, since you’ll most likely not be heading off to Puerto Rico in the foreseeable future — there is a hint of nipple, of the skin tone under the diaphanous orange draperies.

Is that a word?

Of course, my gaydar had been triggered earlier by a small male nude on the staircase and a frankly camp Arab Hall of dark green tiles brought in from some grand tour or other. He never married, but there are rumours of affairs with a female model and a close relationship with a male friend. We just don’t know, it seems. Anything else is gossip.

Next to it is a much smaller painting, a practice perhaps for Flaming, with tiny island in the sea, lost from the final version, and a slightly different top to the picture.

To its left, are the remaining paintings from 1895. ‘Twixt Hope and Fear is an elegantly dressed woman, sat on a chair so she looks over her shoulder at us. The vertical to diagonal arm dominates the composition — as does the double take I had about whether there was an iPhone in her right hand and she was taking a selfie.

The Maid with the Golden Hair — see, that’s a proper title, but girl would be moderner — has a young girl reading a book, caught in a private moment. They reckon it’s Lena Dene, younger sister of his main model, Dorothy (he’s a friend of… nevermind), but I’d rather know what she is reading.

Verticals are accented in Lachrymae — a woman stood, supporting her head and arm on a fluted pillar bearing an urn, presumably a funerarararary one. The sun glints through the cypress tree behind her — a tree which is a symbol of (guess what?) mourning. At her foot is a wreath.

The final picture is Candida, a head and shoulders portrait, replaced by a (lost) painting Listener (although there’s a colour reproduction of it). So, five (or six) lone women, three of them possibly the same model and a Miss Lloyd.

Then you realise you’ve done this in the wrong order.

Hidden in his bedroom, with a spartan-looking single bed and letters that tempting to touch, and a fur rug that isn’t, is the print from The Graphic, a little worse for wear.

Back in the Silk Room are various preparatory drawings — black and white chalk on paper as he attempted to get the posture of the woman right and, Lo and behold!, a photogavure of his Summer Moon (c. 1872), two women asleep, one of them not unpostured like Flaming Nora, their arms curved in parallel, a circular opening behind them. Another photogravure, The Garden of the Hesperides (1893?), three women asleep under a tree (and now in the Lever collection, so I guess I’ve seen it in Port Sunlight. And then there’s Summer Slumber (1894), also seen in photogravure and notable for the flaming June relief in the wall this slumberer is slumbering on. This strikes me that Flaming June must be a little earlier than suggested. I’m not clear where the actual painting is.

And there are also preparatory pictures for some of the other paintings; in the studio are other paintings of oleanders and a photo of some carvings, although it requires a bit of detective work to work out what you should be looking at. It also took me a while to realise I need to go anti clockwise round the Silk Room and how the painting of an Algiers Courtyard fitted in.

But then I was back to Flaming, to soak her in again.

I can’t say I am converted to Leighton, and I suspect the works normally here are not his best, but it was intriguing to see this rarity.