The key names begin with Theodor Kittelsen’s The Aeolian Harp, an almost surreal image with a Gannet on a cliff to the left and a white hoop on horizon out to sea — the harp. Is the gannet singing to the harp or being played to? To my mind, it is the troll pictures that are more relevant — the surreal before the fact trolls as haystacks (or vice versa), which Astrup picked up on. Christian Krohg is an artist who used photographs to construct his paintings — I suspect Astrup did the same at times, as well as open air painting. Krohg moved from sketchy to photorealistic in style, a path Astrup didn’t follow, even though he was Krohg’s pupil. Erik Werenkiold was another painter of landscapes and of fairy tales, plus a series of portraits of famous Norwegians (behave!). Whilst he had studied in Munich, he came under the spell of French artists and moved several times to France to work. This I suspect brought in an Impressionist sensibility, as well as the more pastoral than gothic landscape. Finally, there was Frits Thaulow, a Norwegian impressionist who had worked in Jutland and then moved to France, where small towns influenced his art more than Paris. Apparently his paintings lack emotion.

Astrup had evidently wanted to be an artist from an early age, and a childhood scrapbook is shown as a source for later imagery — the parsonage farm of his father in Jølster was a recurring subject, even after demolition. His father wanted him to be a priest, but he studied painting under Harriet Backer in Oslo. She is best known for her interiors, but paintings such as Bleaching Linen showing women working outside look like another influence upon him. Astrup continued studies in Germany — as seems to be the tradition — and then in France — as became the new norm it seems. He worked at the Académie Colarossi in Paris as Christian Krohg’s pupil. Apparently the school had been established (by an Italian) as an alternative to the allegedly conservative École des Beaux-Arts. It was also open to female artists, among them Emily Carr, another landscape painter. Astrup was exposed to Henri Rousseau, Maurice Denis and Paul Gaughan, among others, getting a grounding in Impressionism and Post Impressionism. In 1908, he studied the work of John Constable, although the British painter’s landscapes are very different from the Norwegians; I suspect the sky and cloud studies were of interest.

With the exception of a few interiors, Astrup’s work is a series of landscapes, sometimes occupied, and usually worked or working. There are fields and gardens, and even the woods are sources for flowers or mushrooms. One technical thing I picked up here was that Astrup did not follow the typical landscape painterly practice of adding more blue to more distant features — indeed, I recall looking at a cityscape from a vantage point as a teenager and seeing the hazy shift to blue. This means that the apparent depth of the painting is reduced — everything is suddenly the same distance away. The realism is undercut.

But then the landscape is personified, with the repeated figure of The Ice Queen — a recumbent nude figure on and as mountains, frequently paired with trapped (male?) figure in a tree. Astrup sought to “seek all the way back to the child’s and the nature child’s colour vision”, which may explain the absent blue as it is a learned technique rather than a naive action.

Astrup seems struck by the ever changing light — so he seems to have a window of about three hours because of the changing light. I wonder if he had a row of canvases? There were five versions of Spring Night in the Garden — with the moon rising over mountains and figures working in the garden in varying degrees of light.

I love Cowshed Courting (1904) — it’s somewhere between Spenser and Jones but predates both. We have the realism of the cattle shed, the cattle in their stalls, a bare foot girl in a red dress, being pressed, one thinks, by little boy blue, who has a bottle in his pocket — presumably alcoholic and presumably tasted from. We are peeping toms — we might not first notice the man in purple lying in the rafters, watching them.

In The Goose (1925-6) there is a bare foot girl, representing innocence, holding a phallic plant (and I believe there are variants with different things or plants being held — here she is blonde in a blue [virgin Mary?] dress and is blonde, elsewhere she has different hair and red dress), the house in the background and washing, various plants including Astrup’s beloved rhubarb, and, bottom right, a goose. There is the air of a fairy tale, but I remembered this painting when I saw Jones’s The Garden Enclosed (1924). The garden is a sacred place, an Eden, a place of virginity. Petra Gill, just engaged, is depicted with red dress and red cheeks, with the geese running away from her and Jones into the trees. The goose might symbolise vigilance and prudence — an arbiter of good and evil. 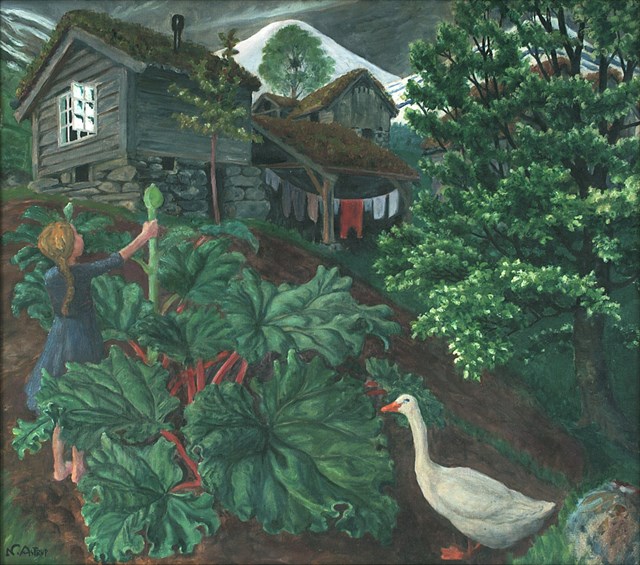 Of course, there are his paintings of St Hansbål or Midsummer Night’s Eve, the first I saw, but I want to finish with Gethsemane (1926), a traditional subject, but here the hills of skulls in a Norwegian garden. The hill, a devil’s head in its left hand side, rises above a fjord, with three empty crosses. A row of men descend with burning torches. Christ in red with a yellow halo stands above a vegetable patch, talking a man. A blonde girl looks on from bottom right. It is an intriguing appropriation — as looks as little like the authentic Middle Eastern landscape as several other paintings. Like Stanley Spenser was doing at the same time, he was finding the spirituality in his local. As he wrote to someone “Come up and visit me, we will wander around the village and look at my motifs”

He was not an academic landscape painter nor individual modernist in his attitude to nature, but like Jones, Gill and Ravilious he offered a kind of naturalist naive, with his Norwegian Romanticism.