I usually say to students that there are no stupid questions. But I fear that I asked one on Saturday — but in defence I’d done battle with Google Maps twice and had gone in exactly the wrong direction, in search of coffe, and then the gallery. “How old was he when he painted these?” I asked.

Given this year marks Sidney Nolan’s centenary, it ought to be basic maths. Mid sixties or older. The gallery attendant had suggested that Nolan painted these canvases whilst hanging from a harness — although the catalogue doesn’t mention this. A photo of him shows him with a flat canvas, which would make sense given the way the paint seems to bleed, but I am sceptical about his acrobatics.

He had experimented since the 1940s with commercial paints, rather than oil and watercolours, in part due to his background in commercial art. Whilst earlier in his career he had used plastic and enamel paints — pre
Jackson Pollock — these are using spray cans. And even this repeats his commercial work, where he’d used machine spray painting.

The first room collects a number of portraits, created in Australia for a 1982 exhibition at the Lanyon Gallery in Canberra. These include a depiction of Francis Bacon, an artist whose work overlaps with Nolan’s — the photos of the northern Australian drought and the paintings they inspired have hunks of cow that echo Bacon’s use of meet. The noise of the depiction is like Bacon’s own portraits, such as the screaming popes. 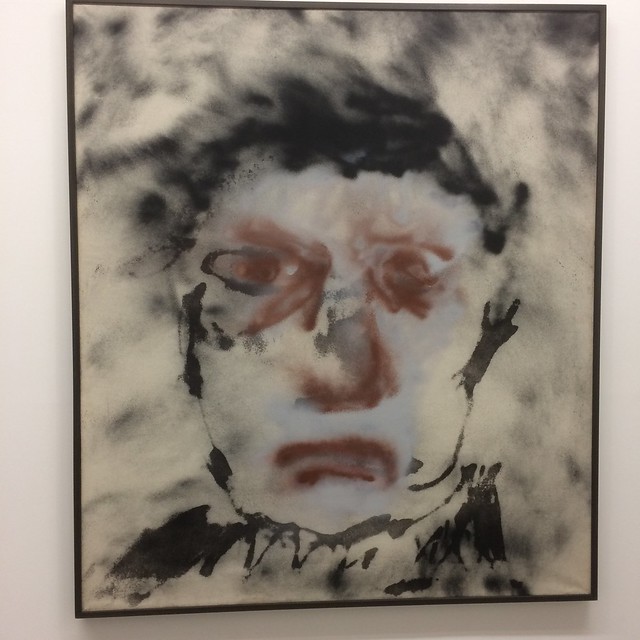 It looks like he is using three colours — red for the eyes, nose and lips, white filling in the contours of the shape, black for hair, body (collar and tie?) and the background. The canvas largely blends through. It has an appropriately crumpled look.

The Baconian comes through in Season in Hell (Benjamin Britten), where Bacon’s habit of painting a square or a frame within the frame is borrowed. Britten — you know, the composer — was a friend and collaborator with Nolan, and the latter had had a tribute exhibition at Aldeburgh the year after Britten’s death. Britten is shown in shades of red — possibly degrees of spray — with white shading. There are also white speckles on the canvas, which could be accidental.

Season in Hell is an allusion to a title of a collection by Arthur Rimbaud. Nolan was a fan of his work and had started by wanting to be a poet. Rimbaud is depicted in The Boy who was Good at Latin. Here we have a single colour, I think, with shoulders and the features, but little sense of the frame of the face. To its right, the image extends, a sort of shadow.

The middle room offers portraits of Aboriginal people, dating from 1986. Whilst being sympathetic with the plight of the original settlers of Australia, and having depicted them in earlier paintings, there seems to be a feeling that he romanticises them, and still can’t escape his colonialist heritage. I have a vague memory that they don’t like being photographed and I note that none are these are named, unlike the pictures of Britten, Bacon and fellow artist Brett Whiteley. Did he know the names and suppress them, or was he ignorant?

Perhaps the most realist is Aboriginal Girl, although it has the same quality of coming in and out of focus of several of his other portraits. The colour of the face is most complex here and the vivid blue sky is punctuated with pink.

The final room also includes pictures of Aboriginal people, inspired by the details of the Royal Commission into Aboriginal Deaths. Several of these — again, almost all untitled, are much closer to graffiti images, almost cartoon-like outlines. This jars, deliberately I’d say, with the sense of violence. There were literally uncounted occasions where a crime or incursion by a westerner led to a death at the hands of an Aboriginal person, with bloody and massive murderous reprisals. In one picture someone is about to be hung, in another they are caged and yet another they seem to be being whipped. In the one shown, the figure crouches, spiderlike, their spiky hair echoing the stick man hands. An orange noose hangs over — around — their neck. There is no background context, just blank canvas.

Finally, Self-Portrait, from 1986, the year before the other pictures in this room, echoing the colour palette of another self-portrait in the Chichester exhibition. The background is black, with a rich blue halo, shading into his body. Parts are the body are pinkish, perhaps another colour more lightly used. There is a black stripe across his eyes, an echo of the anonymity in some photographs in newspapers, but perhaps a nod to the Ned Kelly helmet. But here what would be the viewing slit in the metal helmet is the marked part, an artist who cannot return our gaze. Then there is red — sketching in hair and eyes and nose, but also coming from the neck. Blood?

On closer inspection, you see where he has worked the paint with a brush, clearly rendering it more painterly, but perhaps also pushing the technique in a new direction. He may have worked on some of the others this way too.

These are extraordinary works, sliding between cartoon and figurative and abstract, an intriguing use of a technique more sneered at than appreciated.