A few years ago, Tate Modern had a large exhibition of Matisse’s paper cut outs and collages — making grand claims for his having invented the form and ignoring Mrs Delaney and various Bluestockings in the process. I was more impressed by a smaller show (I think an Arts Council Collection tour?) I stumbled upon in Berwick whilst on a Lowry trail. It was impressive, but I realised that I had not knowingly seen a Matisse oil painting.

The Royal Academy of Arts have this put right with a small and frustrating show, and I prefer the cut outs; they do make sense. A perhaps philistine view is that he can’t do perspective and he’s not interested in foreground/background distinctions. The exhibition becomes as interesting for the story it doesn’t discuss — although it might in the catalogue — rather than the one it does. Matisse lived and worked in Paris, the capital of a European colonial power, and Nice. During his career there were military actions and incidents in Northern Africa and two world wars. These are passed over with little comment.

The gimmick is that the show includes various objects owned by Matisse — a glass vase, a painted table, a Venetian table, African masks and figurines, drapes — which made their way into his art. A green glass vase makes its way into two still lives, such as Vase of Flowers (1924). The sea visible through the window echoes the blue of the open shades, the wooden frame echo horizontal stripes, a red and yellow wallpaper is daubed in. It looks speedily executed; not exactly impressionist, but close.

In Gourds (1916), the fruit, vase, glass and other objects seem to float above a flattened plane rather than rest upon a table. His Yellow Odalisque (a posh word for exotic woman or harem chambermaid) (1936) has a woman in a yellow and red robe, echoing the wallpaper, floating next to the painted table we can see, with another vase. It feels like it owes something to Picasso, with the exoticism trumped by a shift to something more abstract, a play with shape and colour.

Not here, not now.

In a moment of understatement, the gallery tells us that “His use of African bodies reflects contemporary thinking about racial difference.” An authenticity is glimpsed in African art, that supposedly cannot be located in contemporary European culture. There’s an essentialisation, and an appropriation, that is a little uncomfortable. There is a blurring of various cultures within Africa here that seems a little uncomfortable. His eroticism is covered by supposedly primitive desires and makes its way to an exploration of Platonic forms elsewhere.

A mask appears alongside paintings of one of Matisse’s daughters, one of which and the mask made their way as gifts to Picasso. Meanwhile, there is The Italian Woman (1916), one of fifty paintings he made of this refugee, Laurette, in a year. The curves of her face, body and dress are striking, but there is something odd about the way the olive background folds to cover her right arm. Had she escaped from a war-torn Italy to a presumably occupied France? Here the inspiration could well be Paul Cézanne; the outline is striking and does t limit the colours. He paints across the line as well as inside it. The mask offers disguise, protection, a sense of history and the notion of ceremonies — religions, transcendence. 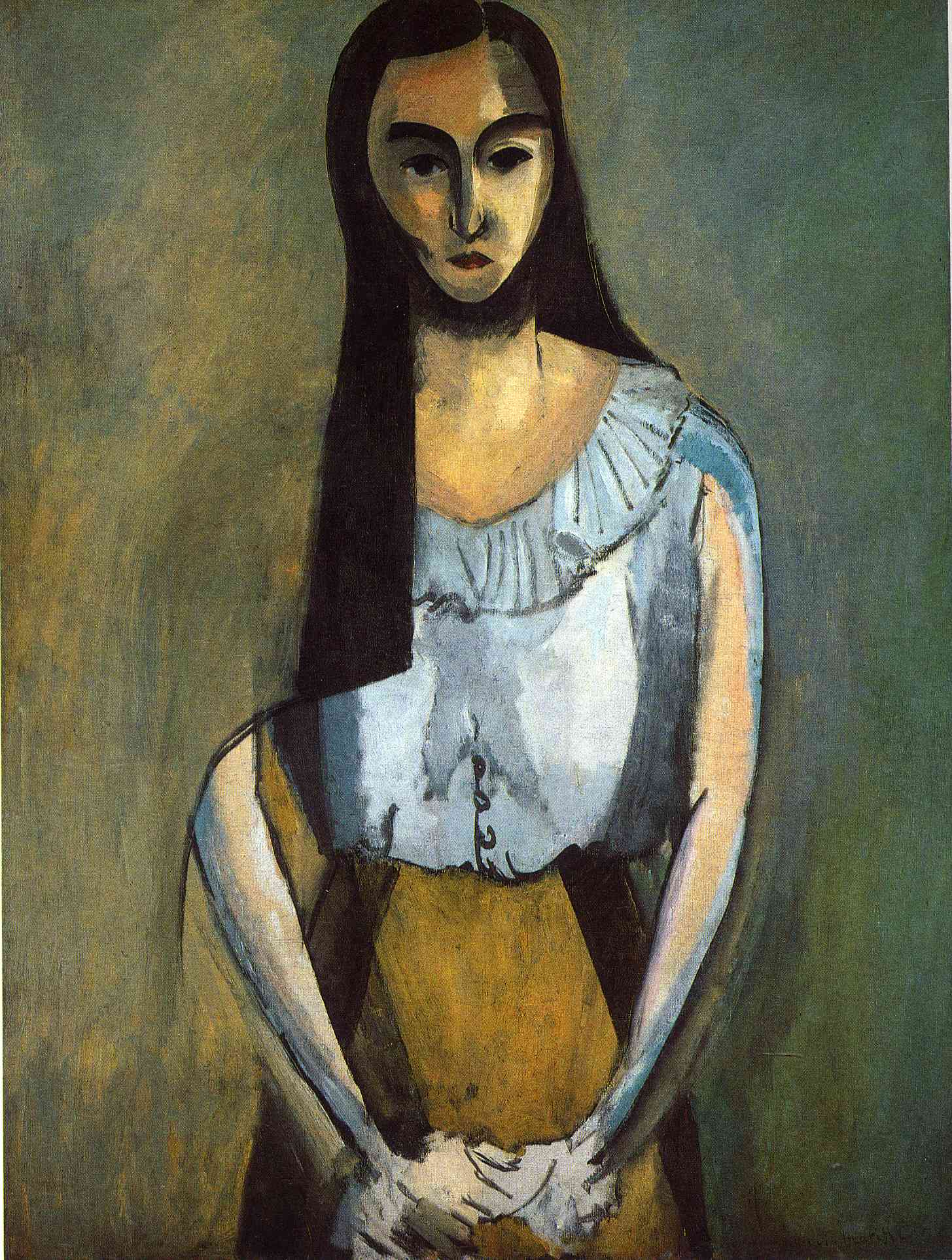 Meanwhile, his prewar visits to Algeria and Morocco — both French colonies or protectorates, the fee to have a bloody history — allows him to echo Islamic art as well as an orientalist eroticism. He seems as interested in the draperies and the intricate wall coverings as the figures in the foreground, with the human models decentered in favour of braziers and weaving. Later he draws upon Chinese calligraphy, finding a non-European character system to impose his signs.

Red Table: Still-Life on a Blue Table (1947) is one of his last paintings. The table, a blue circle, is almost viewed from above, on (above?) which plates and a flower vase hovers. The flowers, I suspect irises, echo flowers in a garden outside the room. A mask like yellow rondo of the back left wall echoes the table top. Meanwhile, the red carpet with black zig zags continues seamlessly into the wall and outside into the garden. The outside is brought in, the inside overflows. 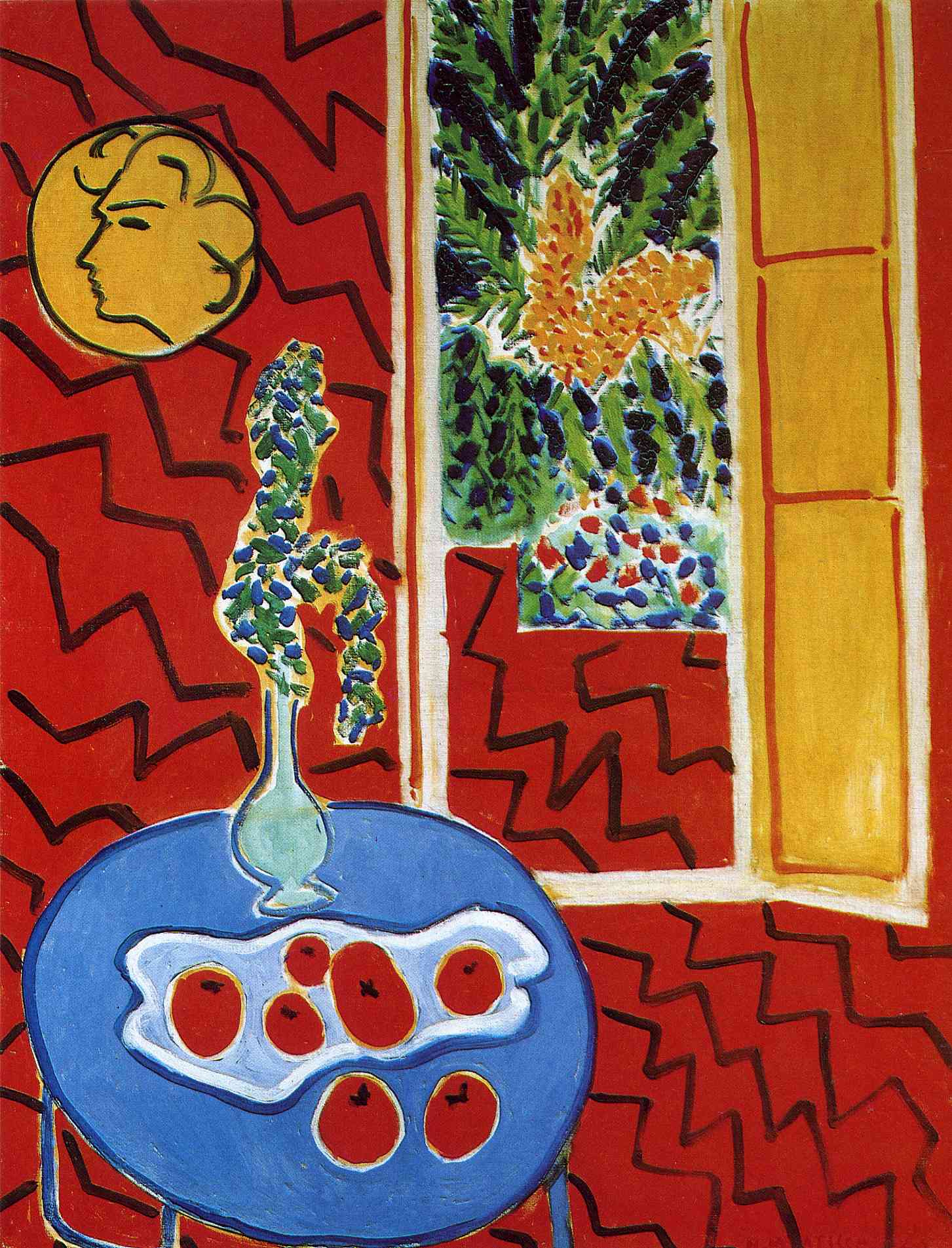 I think I appreciate these more than like it — it seems to be a curious amalgam of Impressionism, Postimpressionism and something like Fauvism — but I think the technique works better in the imposed shapes of colour fields in the cut outs. Meanwhile, there’s a sneaking thought that searching for the ideal Venetian chair to paint was not the pressing issue for many people during the First World War. His retreat to the interior, his acquiring of colonial materials, offer a response of their own to total war in Europe, but somehow it seems off point.