Seeing three exhibitions in one day was a mistake, but two were about to end and the third was next door to the first so I booked slots for Their Mortal Remains and Into the Unknown and shouted at the Science Museum website for not having the complete list of tickets. I allowed about two hours for the first — not enough as it happens — and booked at five for the the Barbican, which would give me an hour to do Robots and an hour to get across London.

I reckoned without the Victoria and Albert Museum’s crappy signage — it would be helpful to know the toilet is on a staircase and not easier accessed — and the Science Museum’s layout — the main lifts are out of action and you have to navigate around the block from lift B to the exhibition (not that lift B is obviously signed from what I assume are Lifts A and none of them have labels). 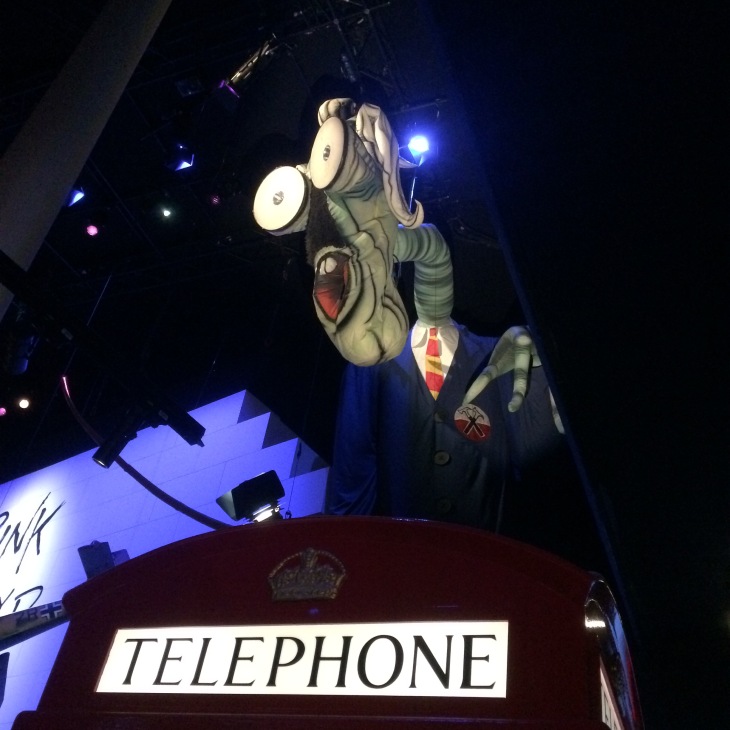 Anyway, The Pink Floyd are a psychedelic rock band who emerged from Cambridge and the London art school scene in the mid to late-1960s, ready for the Underground music scene of the Roundhouse and International Times. I’d gotten into them in the early 1980s, probably absorbing it from my big bother, alongside Yes and Tangerine Dream, for which he can’t take the blame. For a while, The Wall was my go to emo-out music, listening lying between speakers or with headphones. Dark Side of the Moon was almost my first CD purchase, from Britannia Music, but I suspect I’ve been back to Wish You Were Here more often and more recently.

Fortunately a lot of documentation and memorabilia has survived, much of it the property of some kind of Pink Floyd foundation, so we get to see lots of tickets, contracts, posters and letters covering the whole period, alongside guitars and synthesisers and amps and plectra and drumsticks (you haven’t lived until you have seen a dozen drum sticks personalised by Nick Mason’s name). Their live acts were enlivened by light shows, to recreate to stoned experience for some of the audience, to steer it for the rest, and this sense of design then fed into short films for singles (so much for the music video beginning with “Bohemian Rhapsody”) and cover art. Two old friends of the band, Aubrey Powell and Storm Thorgenson, set up an art agency to create much of this art, creating marvels for real in those pre-PhotoShop days. These designs, and some of the prep work — the strip of photos for Wish You Were Here is a marvel and a sign of the dangers involved — were the highlight of the exhibition.

The members of Pink Floyd are said to be notoriously secretive, and this has hardly changed. The first room assumes you know who they are — fair enough — as you enter through a mocked up transit van and the second room has the Pink Floyd family tree alongside swinging London, but you are yet to really know who Dave Gilmour, Roger Waters, Nick Mason, Richard Wright and Syd Barrett are. There’s a map of Cambridge from the sixties revealing old haunts, but the future prodigies never quite emerge as people. It is clear that The Wall and “The Fletcher Memorial Home” are autobiographical for Waters, but I’m no more clear on what drove him — although we get to see the punishment book from the school he attended, most of the names carefully covered over. We know that Barrett had issues that led him to leave the band, and that he did two solo albums before turning up at a Wish You Were Here recording session, but we’re only told the business broke him. Respect for the family may be. Roy Harper is written out of the history, although his name appears on a concert bill. Context is provided by a number of phone boxes — we know they’re TARDISes really — of headlines and clipping that point at event from Churchill’s funeral to the Falklands, but if you don’t know the history you’ll need an adult to explain it to you.

What we’re left with is meaningful spectacle — a reconstruction of Battersea Power Station and and various inflatables from Animals, puppets from various versions of The Wall, videos of interviews. Richard Wright dies in there somewhere, and the band go through several permutations over twenty plus years, without it being especially clear who fell out with whom. You had to wear headphones for the experience, feeding in music and voiceovers, with a rather sensitive wifi that demands you stand in the right place to watch each film.

Somewhere I have a coffee table book that has a day by day account of what The Pink Floyd were up to — my edition cuts off at around The Final Cut — which will tell you more. But there are fewer photos of drum sticks.

After cutting through the new Bolshevik Wing, and negotiating the increasingly dangerous semipedestrianised Exhibition Road, you get to the robots exhibition. Rather splendidly, this is a history of robots from the Middle Ages, beginning with mechanical Turks and quasi-miraculous statues. You get to see thinks like the mechanical swan and the handwriting machine, and even a loom — although it might have been useful to see the Lovelace inspired loom with punch cards. Of course, there is no movement, only relics, literally in the case of the religious statues. 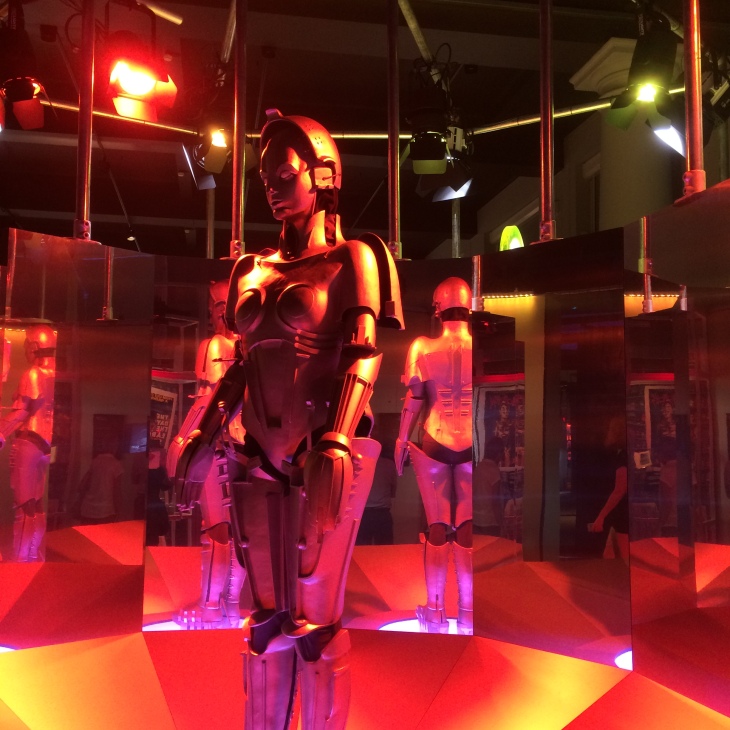 The second space moves to science fiction — posters of movies, a model of Maria from Metropolis, comic books and a couple of hundred toys. What is telling, and made me a little angry, is the absence of any novels. There is a first edition of the English translation of RUR, but no Asimov or Dick. It is as if there is no writing in literature (or paraliterature) that has considered the ethics or role of robots. It felt like a major hole. 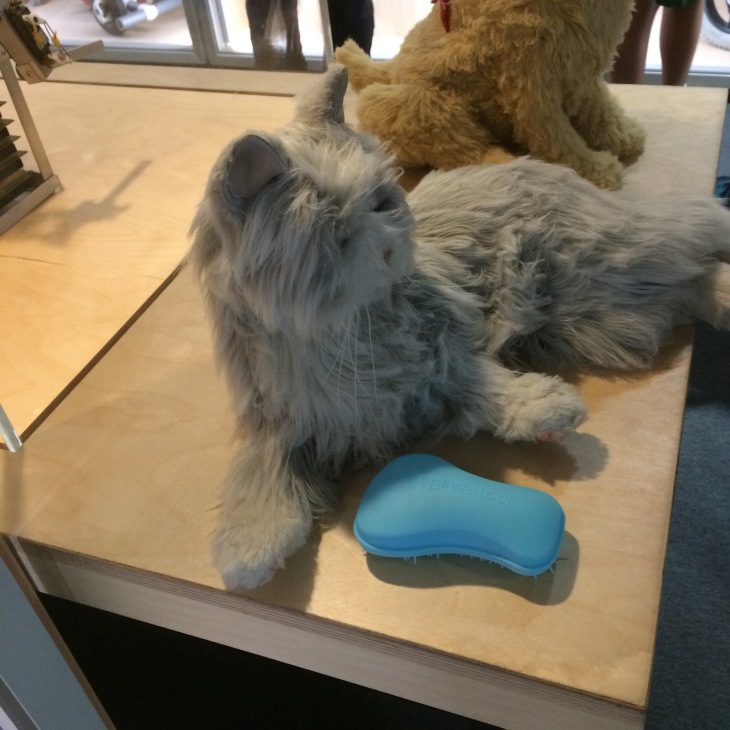 And then we are into industrial prototypes and models — robots there to mimic human bodies or movements, intelligent houseworkers, baby sitters, a machine designed to pick up objects. I have to say it was failing to do so when I was there, and few of the robots were active. There was a robotic cat and dog, a little worse for wear after months of grooming by the public, which took me back to Do Androids Dream of Electric Sheep?, although novels are verboten. And in the final room is a robot designed to work with children with alternate neuropsychologies, which would take me back to Martian Time-Slip if it were allowed.

I assumed that In the Unknown would be in the Barbican’s art gallery, but it was crammed into the Curve, a corridor at the bottom of a flight of steps that I’d last seen a kayak in. I thought back to the British Library’s exhibition, which had a couple of hundred of books and if I recall was in largely chronological order. After the Science Museum, I wondered if that would be the case here, book there were a series of themed cabinets throughout a crowded space. There is no dating on any of this, no credit for cover artists.

But the exhibition isn’t limited to books — there are pulps, eventually, and plenty of comic books, adverts, film clips, concept art and models for films. The decision has been taken to work through by theme — dinosaurs, travel, utopia, cities, time travel and so on. Some labels are more helpful than others — we are told that some critics consider Frankenstein was the first sf novel, but Aldiss is not credited. The film clips are interesting, but unless you catch the start you won’t know the source unless your recognise it. By the time you get to robots, you are a little exhausted, and there’s another hundred toys, possibly from the same collection as the Science Museum’s.

If you like toy robots, you will be in your element.

As with the Pink Floyd exhibition and a lesser extent Robots, I’m not sure who this is intended for. If you have a sense of wonder, you can just geek out, and there’s nothing wrong with that. But I had a sense that to understand the significance of each piece, you needed to know quite a lot about the field. Aside from a Wonder Woman art piece, which ends with the tv theme as karaoke, there is no music: no Sun Ra, no Bowie, no Delia Derbyshire. ETA: I’m told the music was in the listening pods outside the Curve. I’d been under the impression that these were computer games. There is a single clip from Doctor Who, but no dalek or cyberman or jelly babies.

The final case has books annotated by Borges, one of which is the source of the exhibition’s title. It is claimed that Borges influenced Philip K. Dick, but I can’t recall him ever mentioning the Argentinian. Le Guin called him “our home grown Borges”, and the comparisonis there to be made, but I don’t know of a link.

I’m not sure how you should exhibit sf. I suspect the endless text that I’d really desire would be unmanageable. There is a sense of this trying to be encyclopaedic, but the result is overwhelming — and then there are the various screenings fitted around the lobby, one of which is three films totalling an hour with a single set of headphones. The effect is like trying to do all of the Tate walk through history in a hour — or all four themed areas of Tate Modern.

After a while, it’s stuff.

After a while, the Benjaminian aura is overwhelming, it is a day out in a fetish shop.

It is a lot of stuff.

And the curve does it no favours.

Since this, I’ve been to the Eric Ravilious exhibition in Eastbourne, and had a similar feeling that sometimes more is less. One or two Tate retrospectives would have been better with fewer rooms.

All three allow us to indulge our fetishes for things, but at the same time — and this probably isn’t fair to fetishism — they left me somewhat dissatisfied, not feeling like I knew more of it at the end than I did at the start.