I first knowingly encountered the sculptures of Sean Henry on a day trip to Newbiggin by the Sea with the Aged P. Faced with the problem of being a north eastern coastal town — and the last pub before Norway not being necessary nor sufficient — they turned to Art and commissioned a giant double statue, Couple, to be placed in the bay, an implicit answer to whatever question was being asked by a certain northern angel. 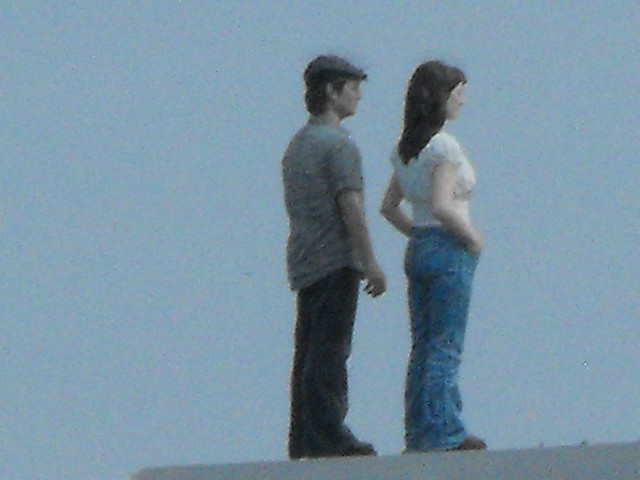 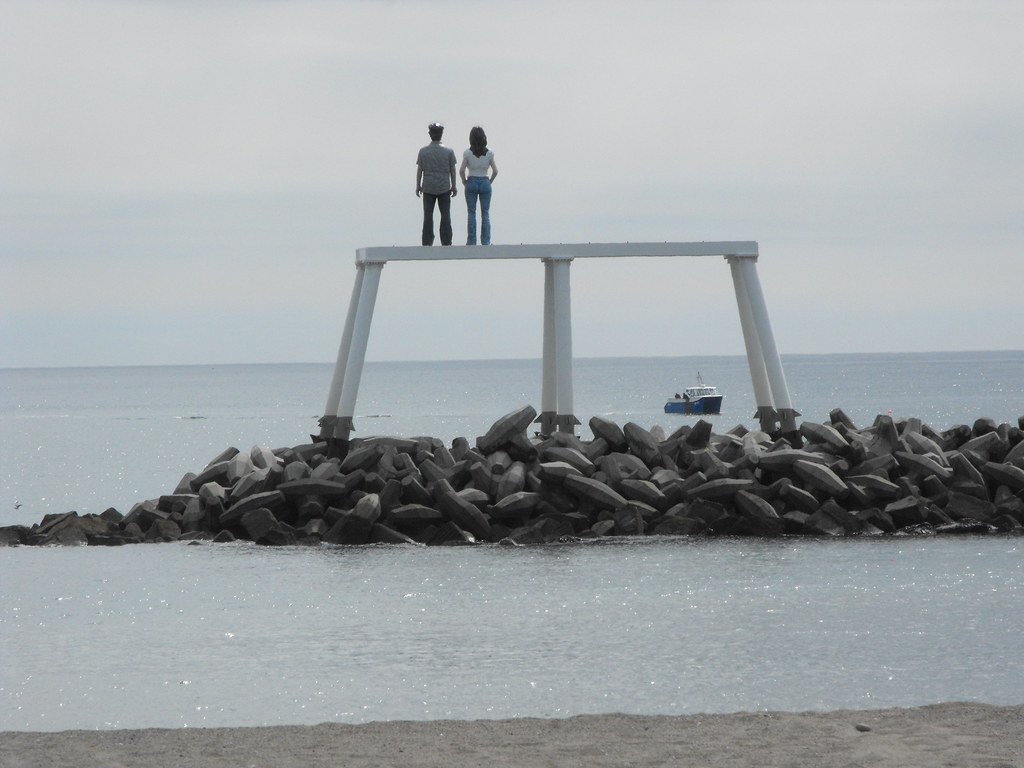 It’s very striking, and very brave, and a smaller version stands on the promenade to take a closer look. The town hasn’t collapsed, but nor is it named on top ten lists like Margate.

And at some point I’d made the connection with a couple of pieces down near Newcastle Station, which were clearly by the same artist — a pedestrian facing a seemingly levitating man, with apparently a third figure that I don’t honestly recall. It’s called Man with Potential Selves (2003). And I think I assumed that he was a Geordie rather than a man from Woking. 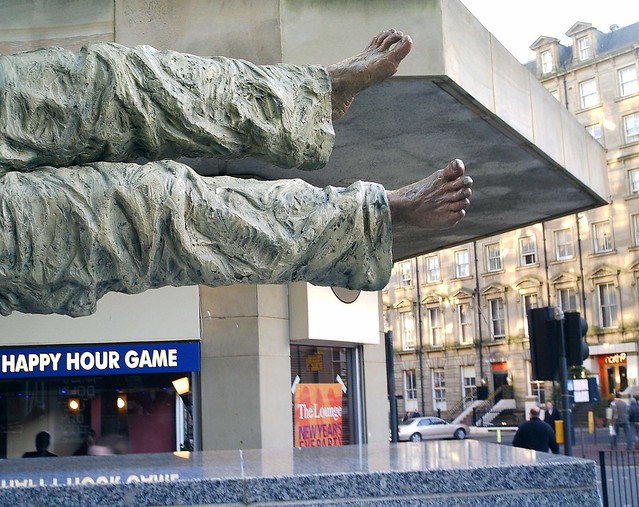 Stumbling on a few in the Economist Plaza (a secret sculpture park just off Piccadilly),didn’t disabuse me of my delusion.

And so when I found The Lightbox was celebrating their local boy, I (eventually) made time for a visit, although it is ridiculously far from here for such a short distance.

It you wander around the town, there are a few sculptures in the wild, which I think is where they belong. I think I missed one in the station, but there’s a homeless guy by there and a man outside the church by Jubilee Square, a man lying down (Catafalque (2003)), a woman in the shopping centre and allegedly one in the theatre foyer, although that’s closed access in the day. 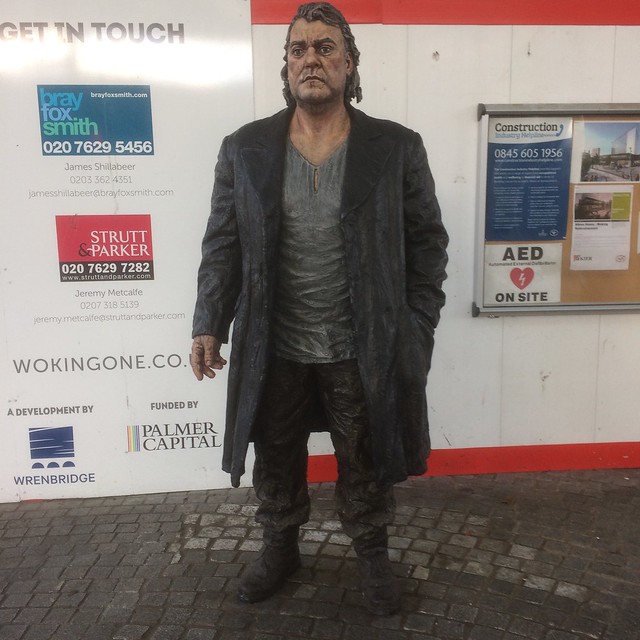 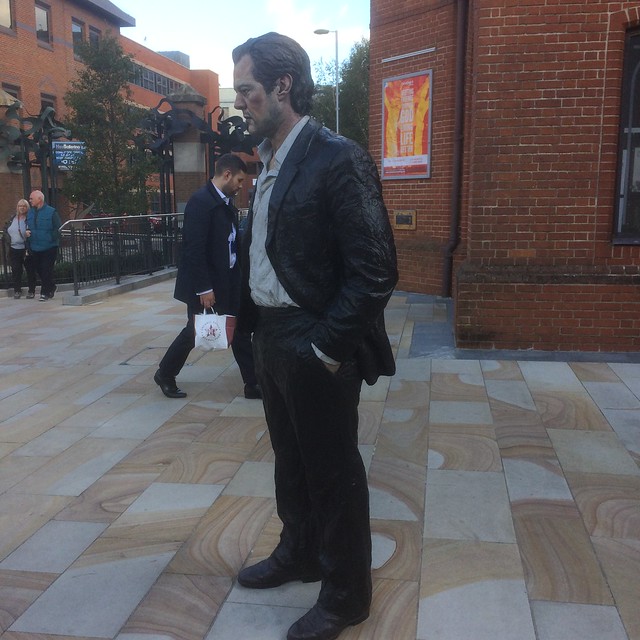 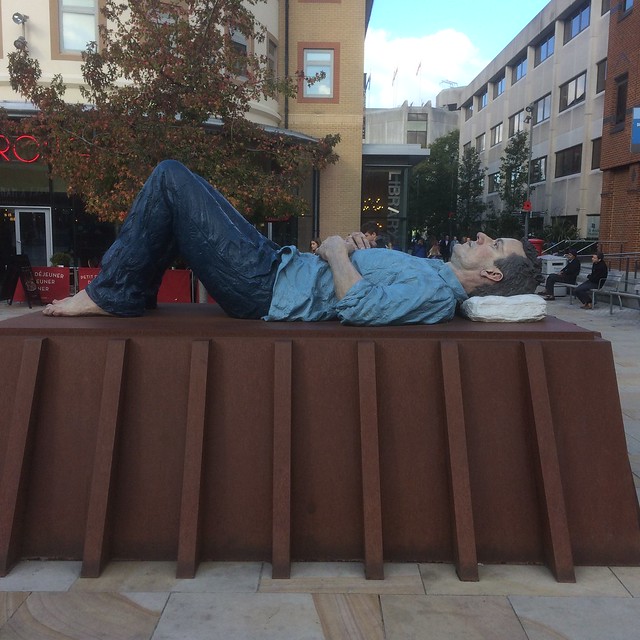 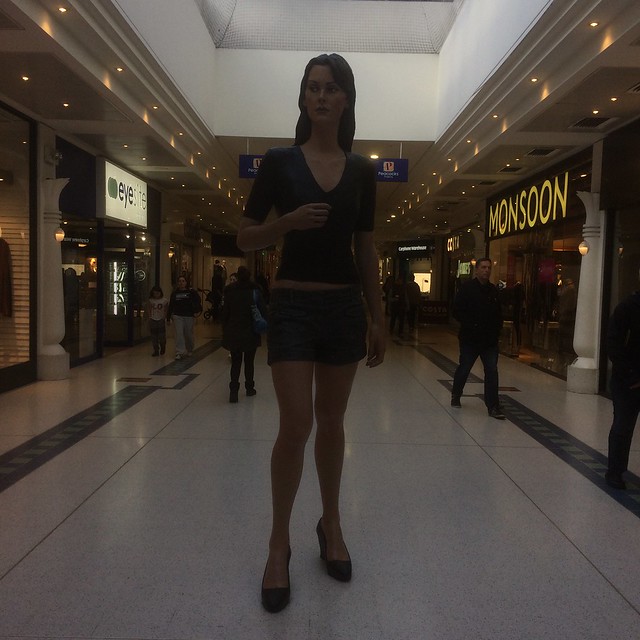 I think they are all bronze and painted — polychromatic sculpture is, I believe, the term — and they hover in an uncertain place between hyperreal and handmade. None of them are the right size, which is to say lifesize, instead smaller than you’d expect or taller. Whilst Anthony Gormley pulls off the same routine of variants on the body, his are derived from casts of himself and Henry’s subjects are wider, if still repeated. Mostly it is men — himself, his father, a homeless man called John, Jonathan Pryce — but there is a repeated female. The men look tired, worn out, staring into the distance, resigned on the whole, but the woman’s look is more piercing, more critical. He works in clay to get the shape — after preparatory drawings or charcoal sketches — and these are used to create silicone moulds that are then cast in bronze and painted. They are either given titles so literal as to be unhelpful (Sleeper, Seated Man) or cryptic (T.B.T.F., T.P.O.L.R.). (“Too Big to Fail”? “Time Being…”? — two men fighting or one holding the other back? “The Path of Least Resistance” — this last a young man looking to his right with polystyrene cup, right foot the other way, a builder on his break called by his gaffer?)

You’re on your own. 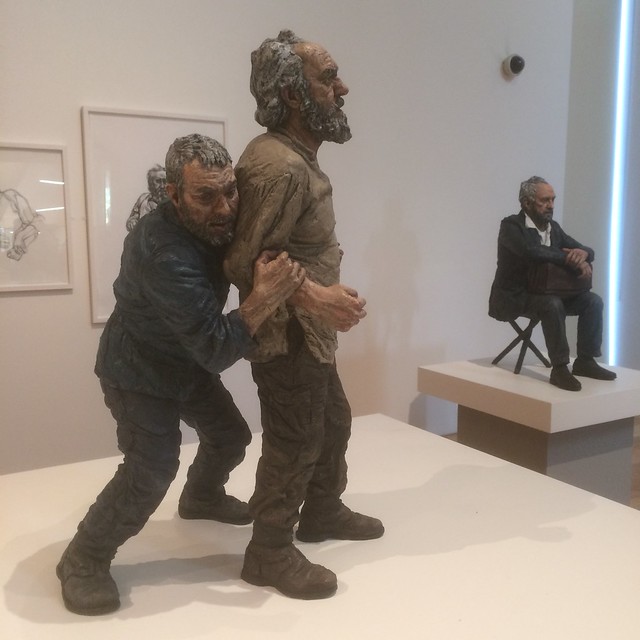 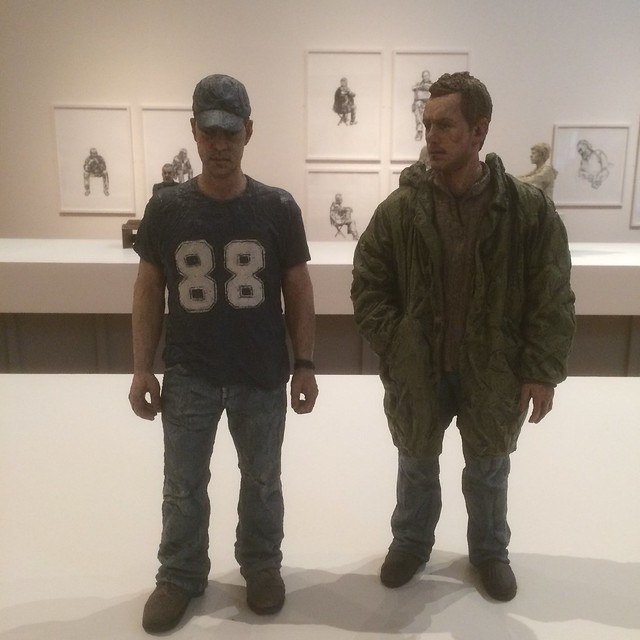 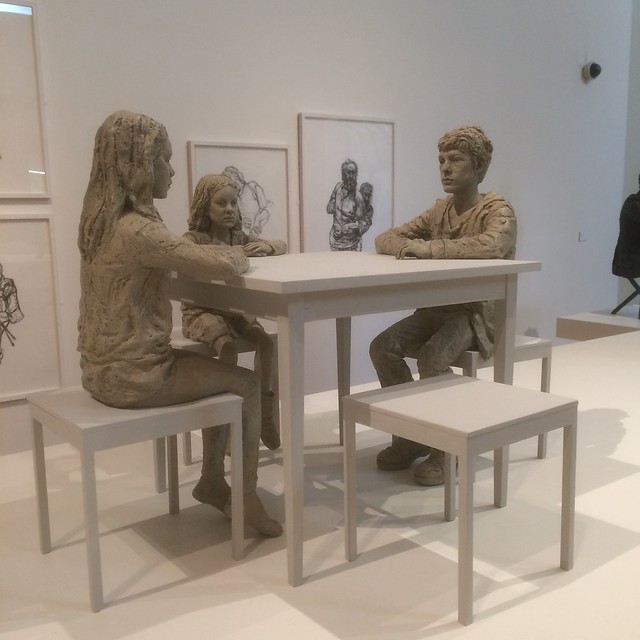 88 (2009) and Parka (2009) are both ceramic, metonymically named for their clothing, two young men. Are they intended as a pair or does their juxtaposition create a relation between them? The Dinner Table (2013) puts a mother and two girls in a domestic setting, disturbingly pale, with an empty chair. The absent husband/father? Late home from work? Or is he cooking? Perhaps the artist is the fourth? Or maybe it isn’t a man at all.

Whilst there is the rough sleeper of Ramp (2012), there is also a giant Sleeping Man (2012) in a bed, which reminds me of Tracey Emin’s Bed, but is more fascinating. I felt the need to touch, but of course you shouldn’t. 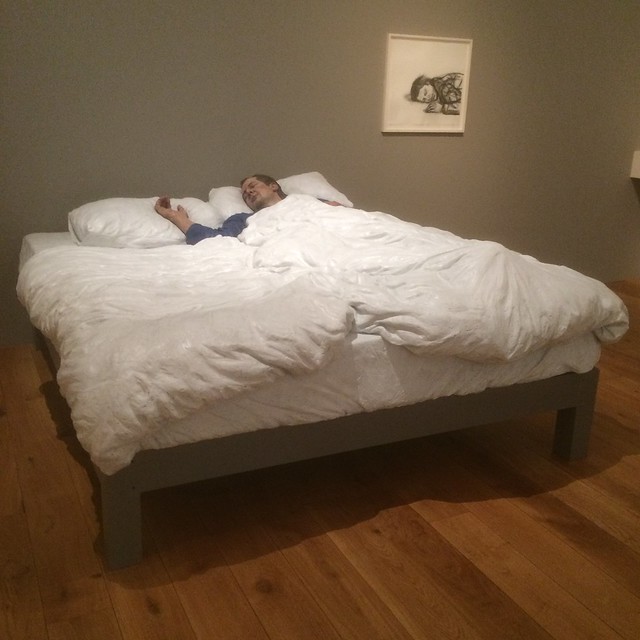 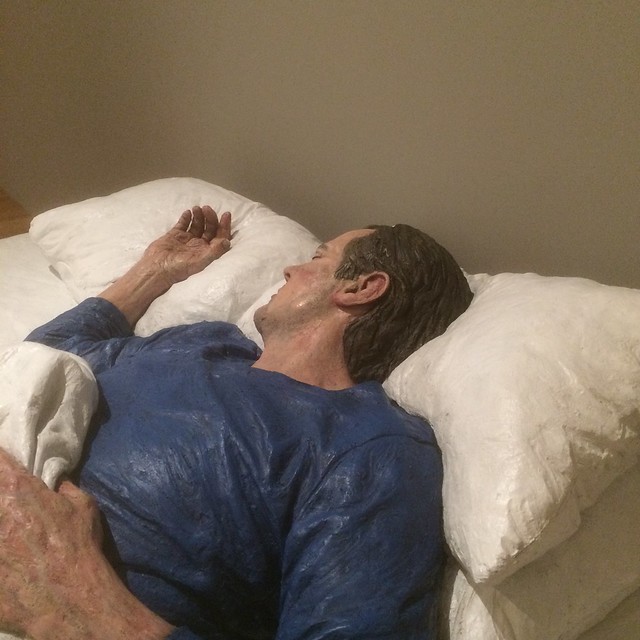 There is another sleeper, Sleeper (2014), in the arms of the same woman as Woman (Looking) (2014), although her hair and clothes are different colours. The sleeper is a man, in army fatigues, far too small to be natural. After a few minutes, it occurred to me that this was a Pièta, although she is the wrong colour to be a proper Mary. Is the sleeping man a dead soldier? A fallen messiah? 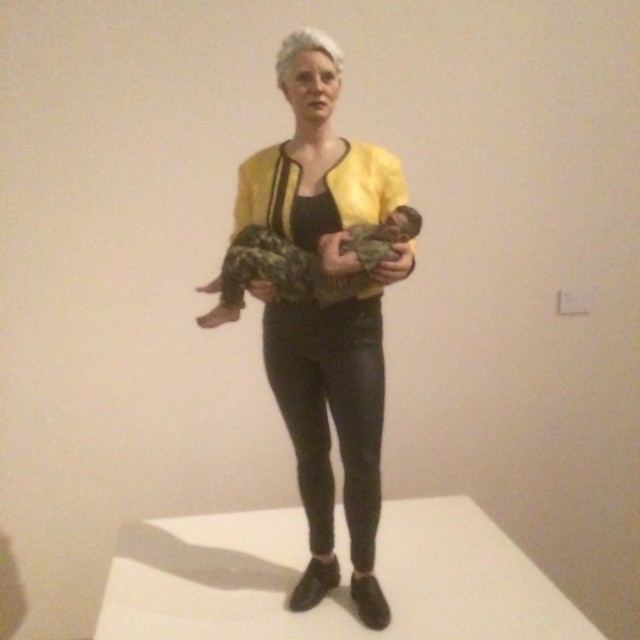 And there is at least one self portrait, One Step Forward (2004) — leaving us awaiting the inevitable One Step Back. 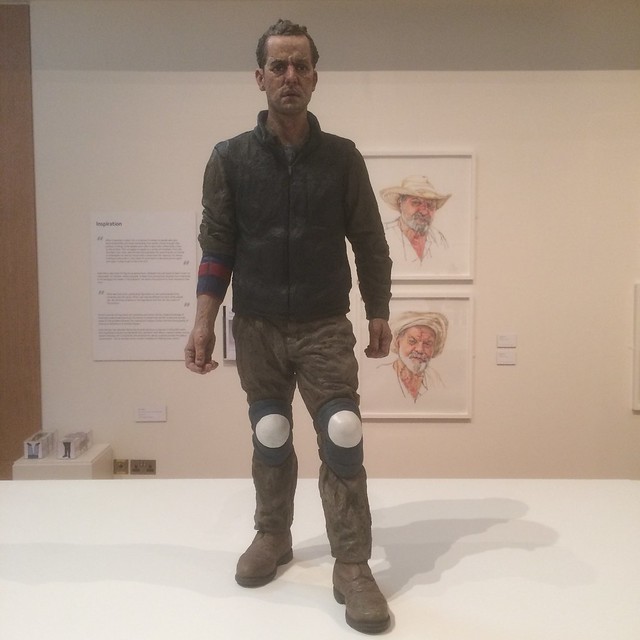