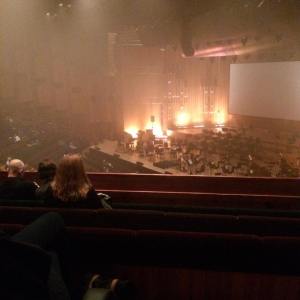 As black and white footage of concrete construction unfolds on a screen through the mirk of dry ice, I think of Goran Stefanovski, who I so wish I talk to about this – this is film of the former Yugoslavia, it may or may not be Macedonia, and I have no idea if these are ruins or sculptures or… He would have loved the conversation. The cinematographer was Sturla Brandth Grøvlen, who worked on the one-take Victoria (Sebastian Schipper, 2015), but Jóhannsson directed it.

Jóhannsson is no longer with us, having overdosed, and I confess I know his work rather than being familiar with it, but I am planning to catch up. I’ve seen Arrival (Denis Villeneuve, 2016), but it hadn’t stuck in my head, and he’d begun scoring the same director’s Blade Runner (2018), only to be replaced by Hans Zimmer of all people. Jóhannsson had formed bands in his twenties and had been played by John Peel, and became interest in conversations between different musical styles such as jazz, electronic, punk, indie and of course classical. His father had worked for IBM and discovered how he could produce music on a computer, and Jóhannsson played with that as well.

Joe Muggs, writing in The Guardian on 11 February 2018, recalls his notes from an earlier Barbican appearance: “He makes music for endings, shut-down mines, obsolete mainframe computers and failed utopias … the notes fade away, the stories have already finished, everything ends.” We are at the end.

Somehow Jóhannsson, long an sf fan, made the connection between his footage and Olaf Stapledon’s classic future history, Last and First Men: A Story of the Near and Far Future (1930), and persuaded the divine Tilda Swinton to record extracts from the end of the book. The novel has one of the most epic sweeps of any I’ve read, from the then present, to millions of years in the future, when the Eighteenth Men have all but abandoned Earth for Neptune. A series of crises are faced, with the Sun about to go supernova, but they have devised a virus version of their identity they hope to project into the universe.

The ending is a beginning.

The future is wifi.

It is plainly sublime.

It’s not a traditional orchestra, and I quickly run into the rusty nature of my musical knowledge. Predominantly it is a string section, with I suspect extra violins and violas, celli and double bass. The woodwind is reduced to cor anglais and bassoons and such like, with no flutes or high notes. I think there were only three brass – tuba and maybe trombone. The percussion was stage left, just two, and I wonder if one of them had access to computers. Off stage were a choir – the Theatre of Voices – and I assume prerecorded, along with the parts played by Jóhannsson himself.

I wish I had the words, but it’s all a slow tempo, largo territory, with a lot of repetition of the same set of slow notes, a kind of Steve Reich on Prozac. Spotlights cut through varying degrees of dry ice, sometimes masked, sometimes blinding the audience. You don’t quite fall into a trance, but the sense of wonder is increasingly stoked by the scale of what Swinton narrates.

It clearly wasn’t for everyone. Despite the sell-out performance, there were some empty seats, and two people on my row left about forty-five minutes into what was a seventy-five minute performance without interval. It’s not a piece you come away from humming, but going back to the Arrival soundtrack I can see where the notes are coming from.

Here we confront the apocalypse, and there’s quite a lot of that in the real world. There’s the sense of the next stage, the Universe going on, and we do have to go on.

And as I shoot off into that concrete once-utopia of the Barbican, where Romans and Elizabethans once built their civilisations, I miss the après entendu I might have had with Goran and may yet have with Mark Bould and Andrea Gibbons, searching for more of the same on Spotify.