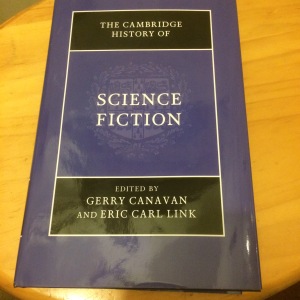 In Gardner Dozois’s history of SF after the Golden Age, there is a moment when he complains that “although it was easy enough even then to prove that the New Wave as such did not exist, the public insisted on reacting as if it did exist.” If this opinion were entirely true, the next few pages of this book would be blank – so I will assert that there is indeed such a thing as the New Wave, perhaps even several New Waves. The temptation is to assume a linear history to the genre, such as the parodic one offered by Barry Malzberg: “the primitive twenties, wondrous and colorful thirties, systematized and optimistic forties, quiet and despairing fifties, fragmented and chaotic sixties, expressionless seventies . . . ” This straw history claims that Hugo Gernsback and John W. Campbell created an optimistic genre that celebrated engineering and technology, in which characterization and style played a distant fourth or fifth place to ideas, the sense of wonder, and action. John Clute refers to this as “Agenda” or as “First” SF, which is “born to advocate and enthuse and teach”; “the result was an SF universe written in the shape of Man. Women and other aliens had visiting rights only.”

In July 2015, I had an email from Gerry Canavan and Eric Carl Link, inviting me to contribute a chapter to a new collection that was a historical survey of sf. There have been a few histories — Brian Aldiss’s, David Hartwell’s, Edward James’s,Roger Luckhurst’s and Adam Roberts’s spring to mind, all by men I absently note — and all these are single authored. (Although Aldiss presumably enlisted David Wingrove in the revised version and we all know there are multiple Adam Robertses… Roberti.) As a collection this was different — although subsequently Roger has edited another.

The commission was to cover to New Wave, which I was wary about on one level as I’d also been commissioned to write a long history of the 1960s and the New Wave, with a focus on the intersection of sf and the mainstream. I could see a space for two chapters, especially as I’d been following through some ideas about Eduardo Paolozzi and I’d written a conference paper on the John Carnell New Worlds which was unlikely to see print. A conference at Liverpool gave me a chance to track down various rarities (to me) in the Science Fiction Foundation Collection.

Pro Tip: When conducting research, make sure that you record all the bibliographic data and proofread your notes as you go. You’d think I’d know this, given I’ve been at it a while, but you use those non-carbon carbon paper sheets to order items and I assumed that these would be enough to retrace my steps. Clearly I chucked these at some point — which was fun when it turned out one article I cited appeared in a fanzine and a book and I’d lost a page number. The fanzine was hiding in the catalogue, and needed persuasion to be relocated.

The book is reassuringly chunky, with the sort of anonymous Cambridge University Press design that screams prestige. There’s a long list of outstanding critics who are familiar names, no doubt outstanding critics previously unknown to me … and me. I’ve done the egoboo thing of checking for my name in the index (nope, people can’t spell it) and the masochistic thing of rereading the chapter… it covers a lot of ground. I’ve dipped into Paul March-Russell’s chapter on modernism, but have yet to read more.

The interesting thing is the centrality the book puts on the New Wave — science fiction is conceived of as a before and after, although Gernsback is closer to the start of the Moorcock-era New Wave than we are to its end. I suspect the book will repay a chronological read to see how this plays out.

Now to ponder where the other chapter went…