I’ve never really done opera – I went to a couple of modern renderings by something like the London Mozart Players and I dutifully download the semi-staged Proms as part of working my way through the season, but… I don’t get the conventions. And whilst I’m writing this with Górecki on my headphones, I don’t necessarily do modern music. 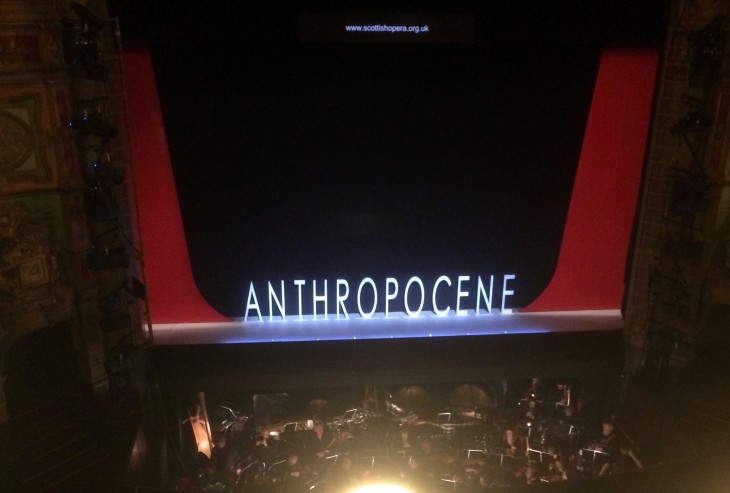 But I was intrigued by a flyer for Anthropocene I picked up at the Scottish National Gallery for Modern Art One (the sequel is usually better), partly because it has an academic (and timely) buzzword as a title and partly because “In the frozen Arctic wastelands, an expeditionary team of scientists becomes trapped. Tensions rise and relationships crumble; and then something appears” had the sense that it was nodding to Frankenstein or “Who Goes There?”.

The Thing: The Musical?

Whether I was right is a spoiler, and so if you are worried stop reading. And reuse and recycle.

And as I noted the date, I regretted I had started drinking… only to note that night’s performance was in Glasgow. But I could do London.

If you’ve been frozen in ice for the past nineteen years, you might not know that the Anthropocene is a proposed name for the epoch in which human activity has the dominant impact on the Earth’s atmosphere and ecosystem. No one can quite agree on when it started – with the industrial revolution, with the Trinity Tests… or much further back. Climate is changing, ice caps are melting, currents may shift, waters may rise. We’ve possibly dodged the ozone hole bullet, but who knows.

Here the Anthropocene is an ice-breaking ship, owned by entrepreneur Harry King (Mark Le Brocq), on a mission to find microorganism samples from the ice in order to find out about the origins of humanity or life and its end. The sciencecy bit is led by Professor Prentice (Jeni Bern) and her husband Charles (Stephen Gadd), who at the start of the opera is still out on the ice with King’s daughter Daisy (Sarah Champion) and journalist Miles (Benedict Nelson), because in the tradition of The Lost World and King Kong we need those kinds of supporting characters. Captain Ross (Paul Whelan) and his huge crew, Vasco (Anthony Gregory) are tutting at the weather and reckoning that it’s going to snow and that the sea is going to freeze. Presumably they’ve timed it very badly for the onset of winter.

Charles has delayed them because he’s found an ice cube containing a body they call Ice (Jennifer France), who has been in suspended animation or hibernating for decades or centuries or even millennia. Of course, Frankenstein’s creature was last seen in the Arctic north, springing “from the cabin-window […] upon the ice-raft which lay close to the vessel. He was soon borne away by the waves, and lost in darkness and distance.” Okay, so we’ve assumed the Creature is male – he wants a wife – but Shelley does a certain amount of gender bending and has given the Creature an education that would befit a young woman in the early nineteenth century. And if you’ve seen any of the versions of The Thing, you now that last thing you should do is defrost a frozen body. Or let an odd dog on board. Carpenter’s Thing has an all-male cast, computer chess voices aside and the alien has been read in terms of feminine abjection; Nyby/Hawks meanwhile have the splendid Nikki Nicholson (Margaret Sheridan) who gets to tie up the captain (Kenneth Tobey), Mrs. Chapman (Sally Creighton) and a sentient killer carrot (James Arness, a rare break from Westerns).

King sees immortality and riches, having already established himself as the overreacher, Prentice sees scientific immortality and Miles sees a scoop. At this point, you begin to wonder when the opera is set, because a satellite telephone seems a little retrograde in the era of Skype – on the other hand I can’t get a 4G signal where I am sitting. Would he really use a notepad rather than an iPad? His editor reckons the real story is to strand the expotition where they are (and the sea has frozen over) and so Mile indulges in sabotage and homicide. Ross and Vasco meanwhile have been channelling The Rhyme of the Ancient Mariner and got all superstitious. It’s only a wonder that no one’s killed an albatross.

Although my suspicions were roused in the first half, we are in sacrificial, vegetation ceremonies territory (with or without killer carrots). The Waste Land can be redeemed by a sacrifice, and the cycle of the seasons continue. The crew face a terrible choice: a blood sacrifice will free them, but it will also start the ice caps melting again. Ice is some kind of royal daughter of indigenous people, sacrificed to control the weather at some undisclosed point in the past.

I can’t help but feel that this is bad science and the scientists grope from mysticism far too easily. To stop climate change we need to stop emissions and using the Earth’s resources and do so pretty damn quickly.

Of course, it’s one of them there meteffas.

The ship is the world and the blood sacrifice is lifestyle changes.

Or composer MacRae and librettist Welsh (better known as a rather good novelist, but this is her fourth collaboration with MacRae) simply want to draw attention to climate change and aren’t offering solutions.

The character names are giving us some odd nods – Ross to an Antarctic explorer, Vasco to the Portuguese explorer who found a sea route to India and started an empire. They sort of pair off – the Kings, the sailors, the scientists and journalist/story, largely colour coded by costume. The staging is simple – a white curtain surround, two flats to mark the ship’s bow, a step ladder, the word ANTHROPOCENE… I confess at points I wondered whether the rearrangements of letters would give us anagrams … ONCE NORTH APE… NO PEACE NORTH… NET PORNO ACHE… THEN CON OPERA… but sadly they ignored such operatunities.

Although I’m not a judge of operatic voices, I think Ice (Jennifer France) was strongest, and she was able to offer some physical action, whilst the others were somewhat poor at miming actions. At times the music seemed to be channelling Bernard Herrmann, at others parts of Ralph Vaughan Williams’s Sinfonia Antartica. The tension of the plot is undeniable, although the blocking sometimes worked against it. If the score ever makes it online, I’ll gladly give it another listen, but I think it’ll take a bit of work to find the tunes.