I’m scrambling down a granite and grass hillside, increasingly realising that whilst this is path, it isn’t the path. I’m wary of checking the phone, because I’m at 70% of battery life and the cable is dying. Frankly the phone is dying. Somewhere to my right is a music festival, and I see cars and people passing by on the road I’m aiming for.

It all seemed simple – tram to Ekebergparken, up the hill into the sculpture park and then beyond, past various sculptures I looked at in April 2018, but it’s too hot to linger. The google map route suggested a way that seemed to involve descending steps and skirting the mountainside, but my stamina isn’t up to this. My boots should be able to cope, but my brain is friction. I find a branch to use as a support on the last metre descend and I’m onto the track to the pavement. The track I should have come down.

This is a long way from where Edvard Munch lived. 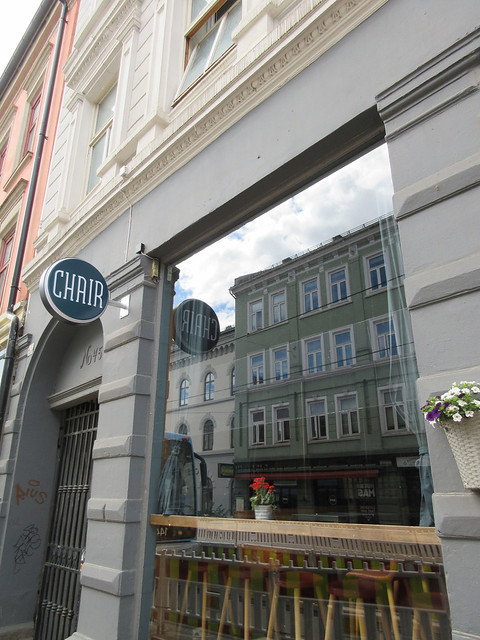 He was born in Løten, Norway, 12 December 1863, to a doctor, Christian Munch, and his wife, Laura Catherine Bjølstad. When Christian became medical officer in 1864 at Akerhus Fortress, the family moved to Kristiana, now Oslo. I’m not sure where he lived (partly on Pilestredet), but by 1875 they’d moved to Thorvald Meyers gate 48 in Grünerløkka. This is a hip and happening suburb, which I’d walked through on the way to the river last year, and there’s a branch of Godt Brød nearby. I see I screwed up and photographed the wrong building – there’s a reluctance to number the buildings.

So this isn’t where he lived. It’s actually a pizza restaurant now.

Across Olaf Ryes plass, due west and then north is Fossveien 7, and indeed Fossveien 9, where they lived from 1877-1882. Google maps keeps wanting to tell me it’s a burger joint, but it’s wrong. His mother had died in 1868, of tuberculosis, and now his sister Sophie went the same way. So this building is the site of the sick room that he paints and engraves repeatedly, albeit with a model for his sister and a version of his aunt.

There are various parks and grasslands here now, and the land descends to the river. At points you can see to the Gamle Aker kirke, which he painted more than once. In 1879 he joined a technical college to study engineering, despite already being an artist, presumably under paternal pressure. He left after a year and joined the Royal School of Art and Design in 1881. 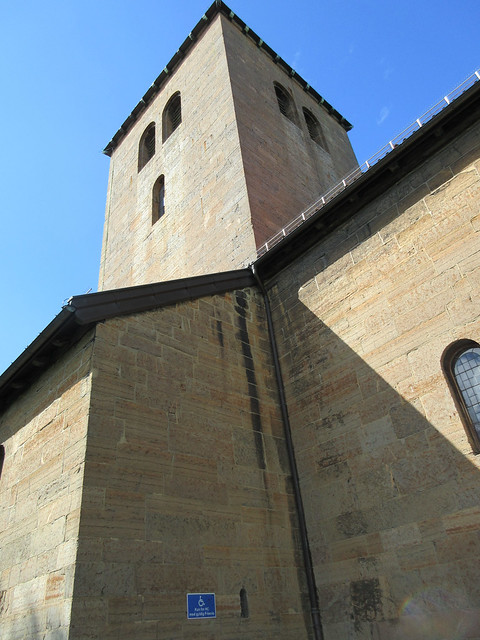 Then it was back to Olaf Ryes plass and number 4, which seems to be the corner property of a square, next to a Fretex charity shop. Towards the end of his stay here, presumably, he had a joint exhibition and set up a studio space with fellow students. 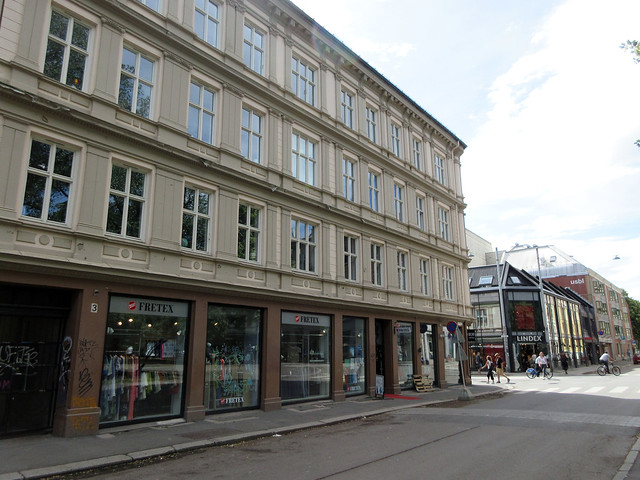 There’s another gap in my records, now, from 1883, and we find him with his family at Schous plass 1 from 1885, a corner property and now a branch of a café chain Stockfleths. The traffic light leans at an awkward angle. By then he is gaining fame or notoriety, and he’s able to travel to Paris where he exhibits, has a brief trip to London, but returns to Oslo in December 1889 on the death of his father. 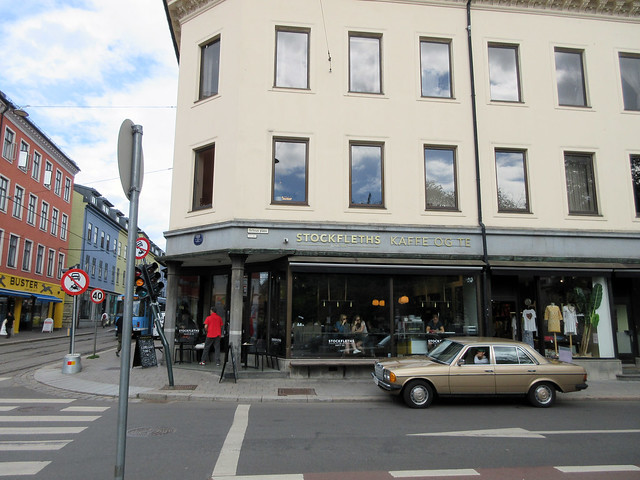 In 1892 he is invited by Adelsteen Normann to exhibit in Berlin, and his paintings cause controversy and the exhibition to be shut. The paintings are shown around Germany on the back of the controversy.

At some point he visits Oslo, and goes for a walk with friends above the city, on the edge of Ekeberg. I wonder why he was there? It’s a great view and the Norwegians seem to love countryside, so perhaps he was getting a breath of air. It’s not until 22 January 1892 that he writes down what happened:

I was walking along the road with two friends
– the sun was setting
– I felt a wave of sadness –
– the Sky suddenly turned blood-red
I stopped, leaned against the fence
Tired to death – looked out over
The flaming clouds like blood and swords
– The blue-black fjord and city –
– My friends walked on – I stood
there quaking with angst – and I
felt as though a vast, endless
Scream passed through nature

There’s a theory that it’s a by-product of an eruption of Krakatoa, which puts the walk back in 1883-1884, and certainly Munch stores memories for future use.

I’d found the spot on someone else’s blog and it took a while to locate it on Google maps, but there’s actually a tab. And when you get there, a plaque. 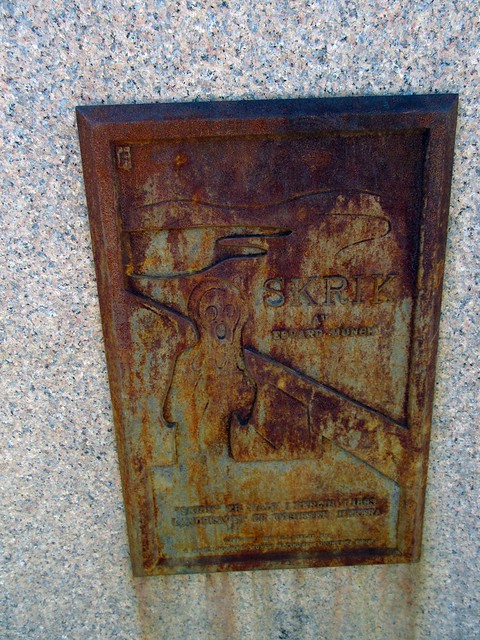 I’d read the fence as marking a bridge or a jetty, but in fact it’s a boundary fence to a road that has a sharp bend to the left. Looking out, across what is now a metal fence, you are struck by all the trees, and you can see the coves of Oslo’s fjord, including Bjørvika. You can just about make out the tower of Oslo Cathedral, and the Royal Palace. The hills are recognisable from the painting.

I wondered if I should scream, by the sky was a rich blue and he hears the scream rather than yawping it.

Two people walk past, unfortunately not wearing top hats, but the angle is almost right. 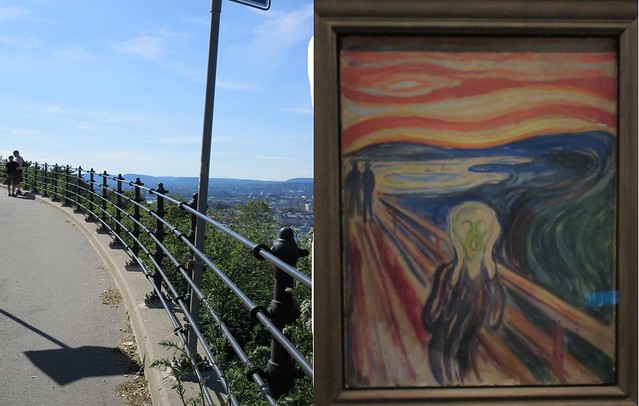 Munch divided his time between Paris, Berlin and Oslo, buying a property in Asgardstrand and then in Ekely in 1916. His studio there survives, a fifteen minute walk from the T-Bahn through housing estates and woodlands and up some hills. Their webpage is out of date, as is the information on google, but at the moment it is open for more days but from later in the day. Essentially there are two rooms, one of which was his main studio and a cellar that I suspect is not really for public show. Traces of him remain – the poles from which he hung his artworks, outside spaces where he weathered his canvases. His house, and other outbuildings, has long since been demolished. It was here that he died 23 January 1944, leaving his remaining artworks to the city of Oslo. 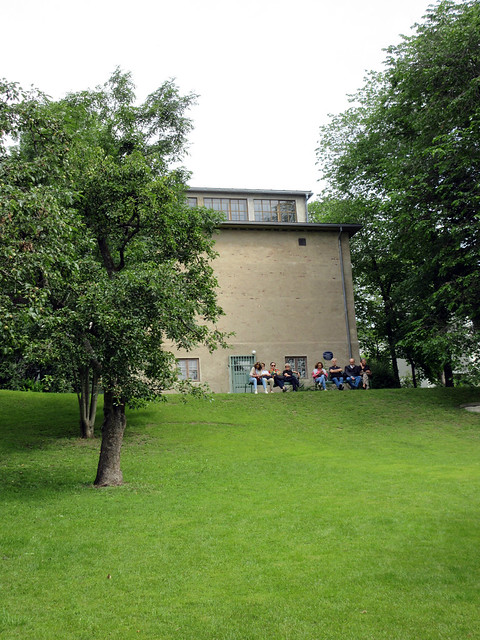 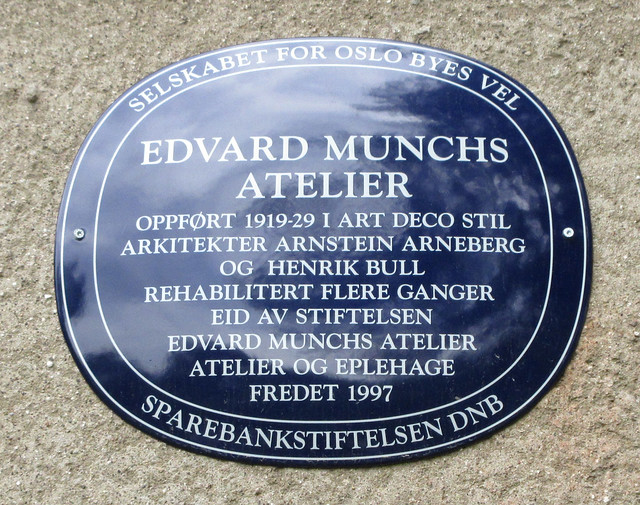 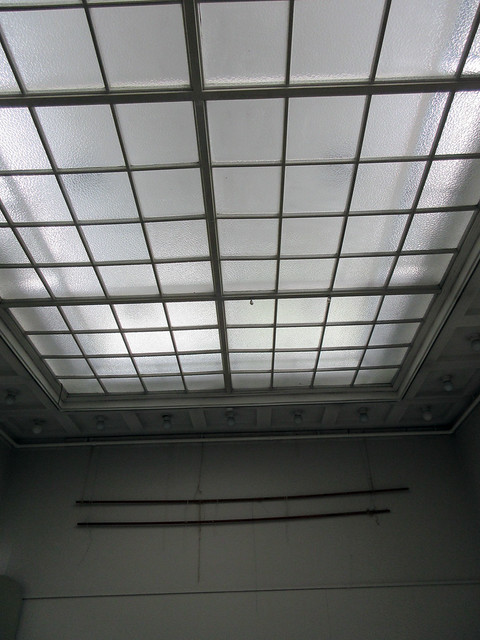 He is buried in Vår Frelsers Gravlund, beneath a column monument, and he was easier to find than I thought he’d be. In fact, easier than Henrik Ibsen, who is within line of sight and who I’d walked past without noticing. So it goes. 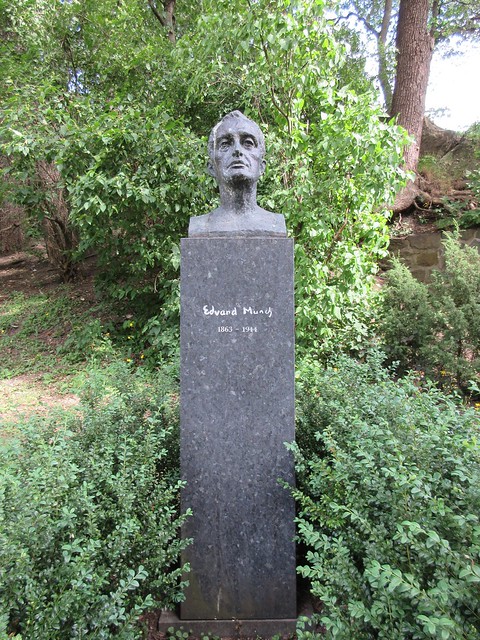 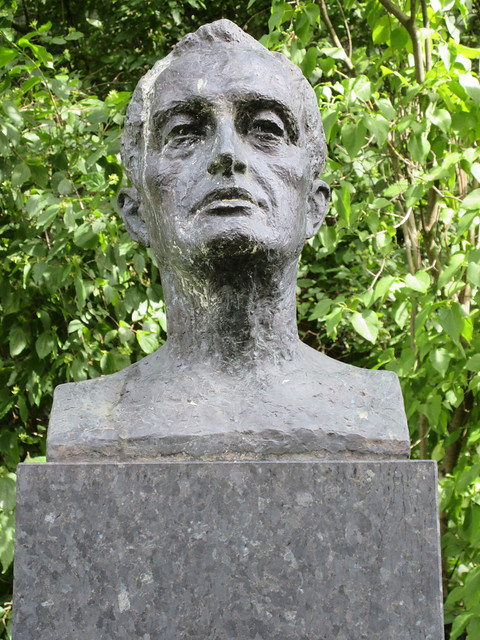 It took them the best part of twenty years to agree to and build a museum to house the many thousands of canvases and prints that Munch left to them. After various sites were considered, they ended up in Tøyen, one of the more deprived areas of Oslo, then as now, and clearly there was some hope of revitalising the community through culture. The then Labour governments were unwilling to spend on culture when many lacked bread and in the end it was financed by money from Oslo’s municipal cinemas. It’s close to the botanical gardens and zoological museums, but not within their walls. The designers were Einar Myklebust and Gunnar Fougner, and it seems to have softened its brutalist edges over the years with glass additions. There’s a sizeable exhibition space, which was initially devoted just to Munch, then in the last twenty years to sympathetic artists (Gaughin, Van Gogh, Robert Mapplethorpe…) or star curators. Security is high – but that didn’t stop The Scream and Madonna being stolen. 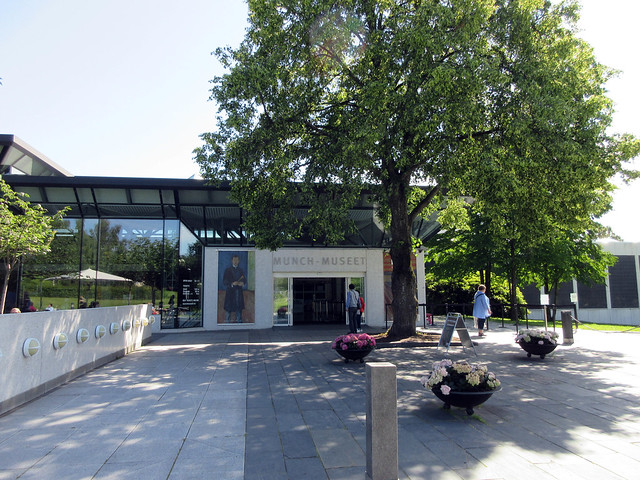 The gallery’s democratic positioning is coming to an end and next year it will all be moving to the new National Gallery, in a landmark building near the Opera House. Undoubtedly it will Tate Modern a run for its money, but it still feels a bit of a shame. 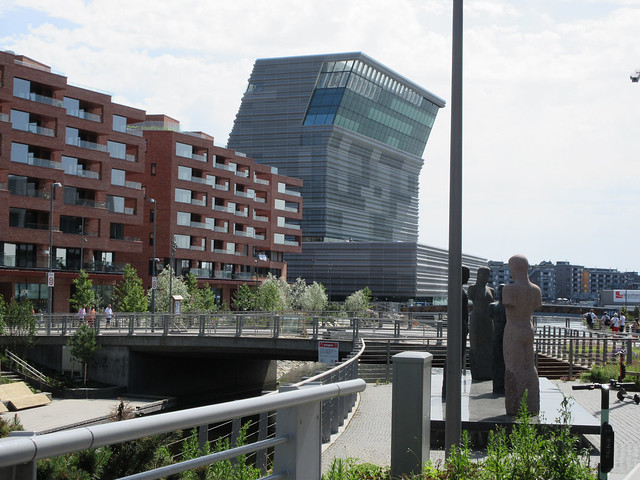 Ironically, the building is visible from where he painted The Scream