There was a female artist – I must have her name written down somewhere – who painted a copy. Possibly in black and white. And I saw it in exhibition at the Bryggen Museum, Bergen. For reasons that might not be obvious to you, I wondered if it was a pastiche rather than a genuine Astrup image – until a certain amount of googling showed up the painting by Astrup.

In black and white.

So, it was pleasing to find the actual painting – I think from a private collection – on display at KODE 4 in Bergen.

The view was instantly recognisable to me: Bergen Havn, Bergen Harbour, and that is Bryggen, a World Heritage site, on the right. I’ve seen a similar view, from a lower vantage point, many times, but don’t seem to have a photo of it. 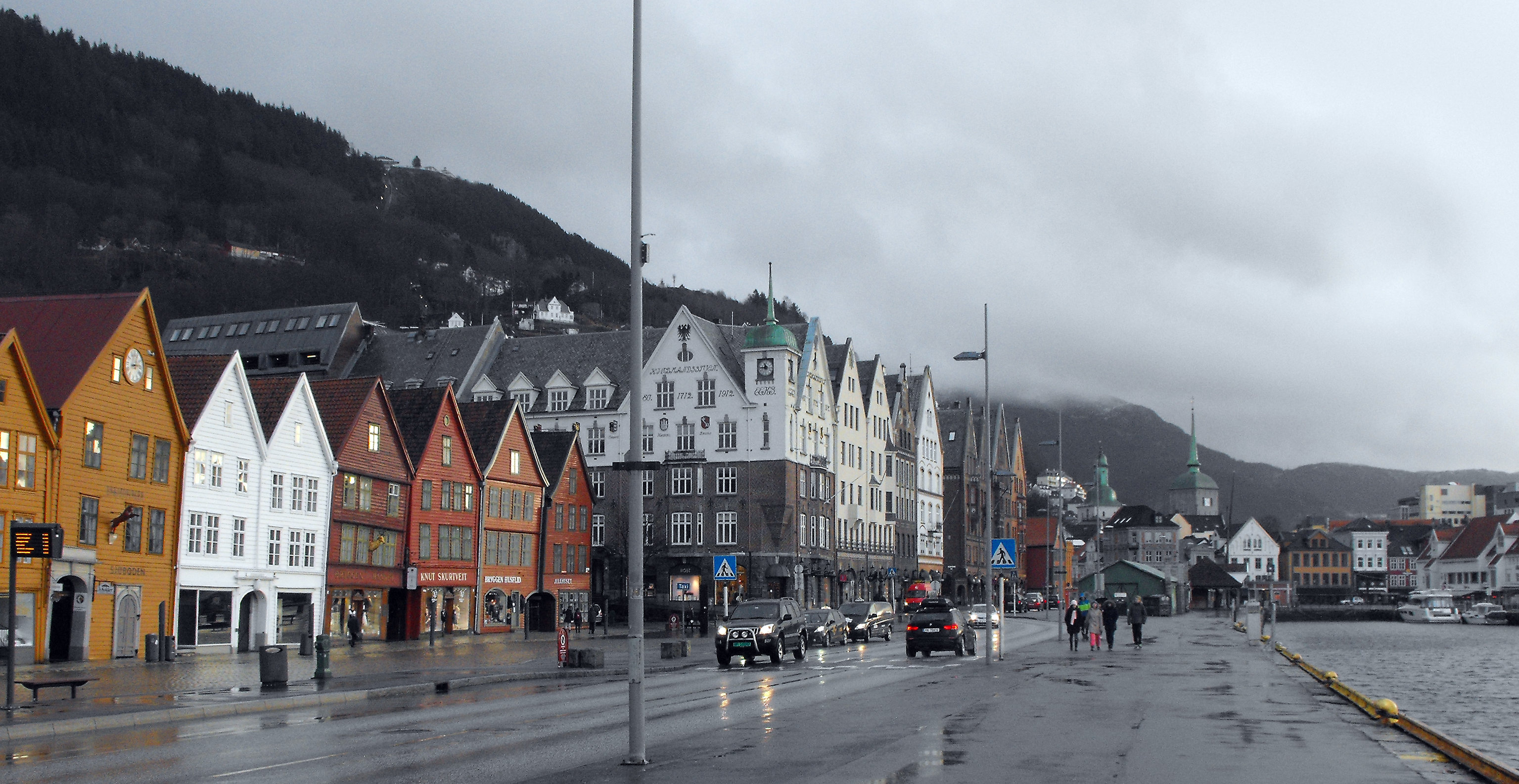 But this is Astrup – who pretty well only ever paints views of Ålhus, Jølster, and Sandalstrand, on the other side of Lake Jølstravatn. He was trained to some extent in Paris and visited Germany, and he had an exhibition in Bergen in 1908. His paintings are of gardens and fjordscapes. This is the least green of his paintings. Some of them do have people, but never so many – in fact here there seem to be hints of Edvard Munch’s Evening on Karl Johan (1892), but without the existential angst.

It is a rainy day in Bergen. The umbrellas are up, echoing the streetlight architecture. The promenaders disappear into the distance, towards the Bergenhus Fortress. Their movement mainly on the right side of the painting contrasts with more of a sense of stasis on the left – loading or unloading of what looks like barrels. A white horse is shackled to a cart (that isn’t the word – harnessed?).

To the right, there is a large Norwegian flag, a design dating from 1822, but Norway only became independent from Sweden in 1905. The flag answers – appears bigger than – the orange brown sails on the boats. The harbour is busy, clearly a working harbour, and there seems to be a steamboat on the far shore. The verticals of what I assume are cranes or block and tackle devices are softened by curves, but their relative heights add to the depth of field. I wonder, given the whiteness of the sky behind the clouds, if in this case Astrup prepared a canvas for once with white paint.

The viewpoint seems to be from a first-floor window – and I wondered if first this was from what is now a DNB branch. But then you’d expect the old bibliotek – Starbucks – to be set back on the right. But I quickly realised – and this is important for the place of Norway – it is the Hanseatic Museum, formerly an office of the Hanseatic League. This protrudes from the rows of buildings of Bryggen proper. The buildings next to it, which run down to Lodin Lepps gate, are currently brown, so Astrup may have taken liberties. It still has a flag hanging. 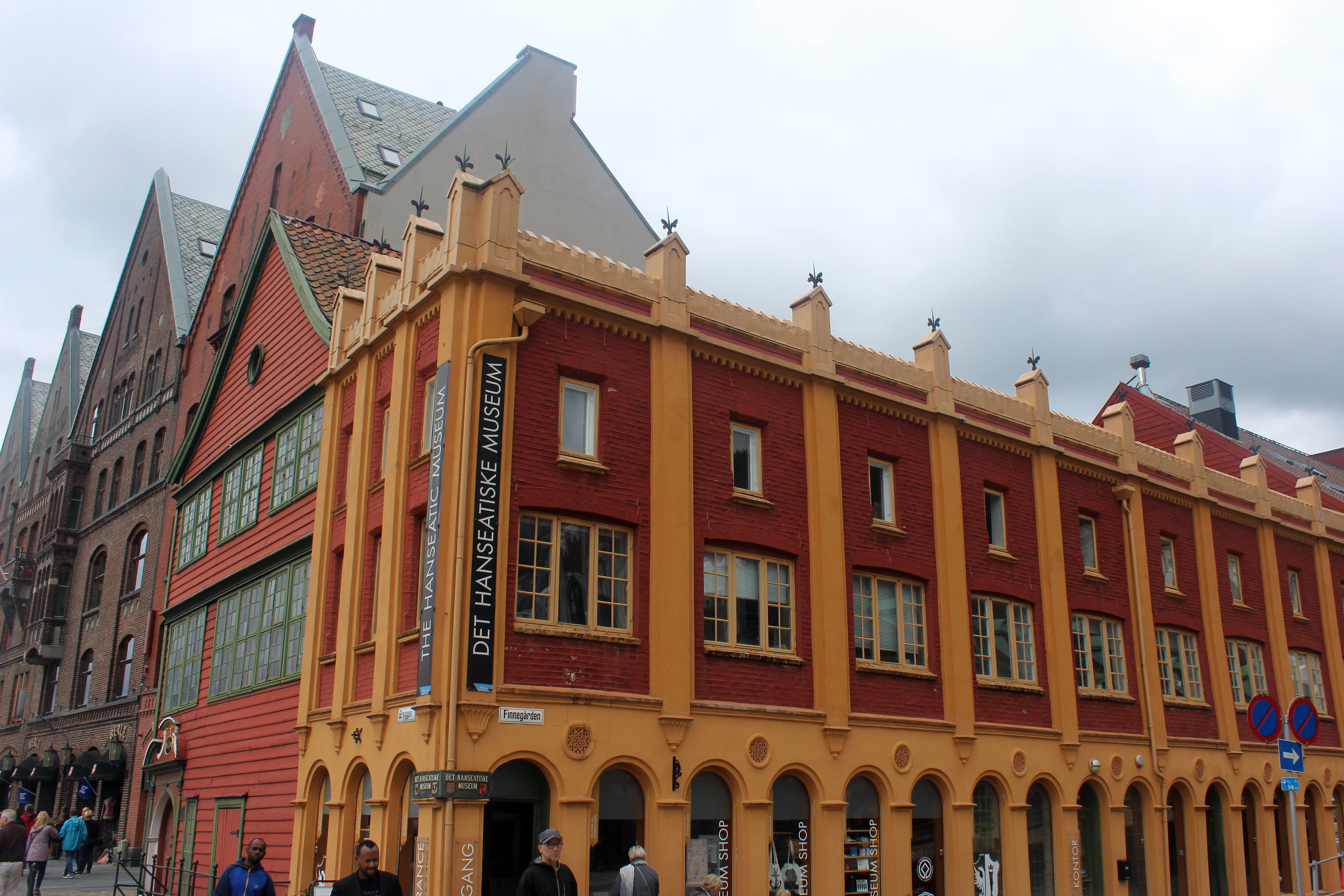 And speaking of those liberties – it’s more than likely the road has been widened since the painting was made, but my guess is that Astrup chose to narrow it. I think there has been a lot of compression.

I’m also squinting at the church tower on the far side of the harbour. It should be the Nykirken, but its spire is thinner and taller. I think he’s transposed a tower which is on top of a hotel, which perhaps could have been hidden by the flag. 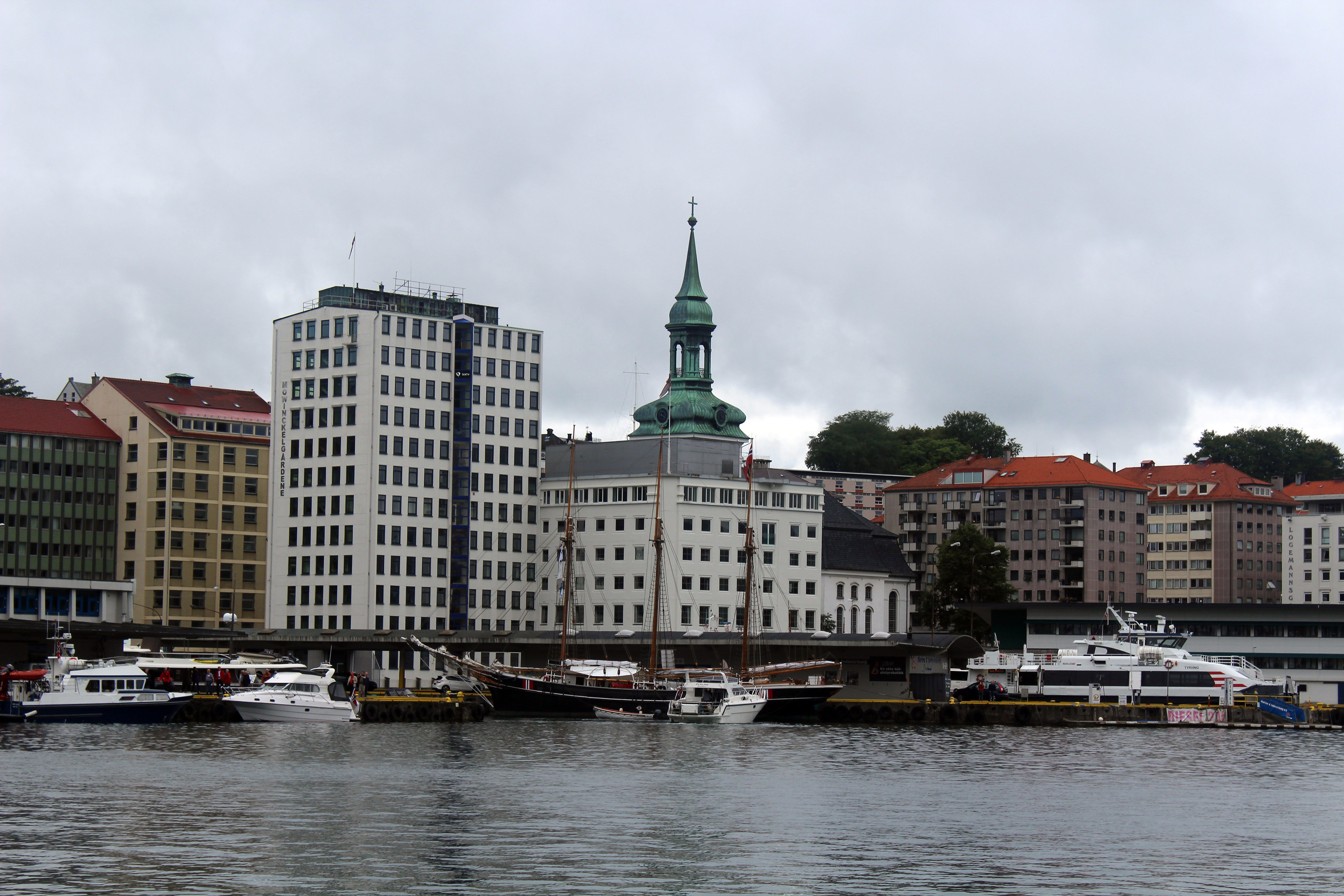 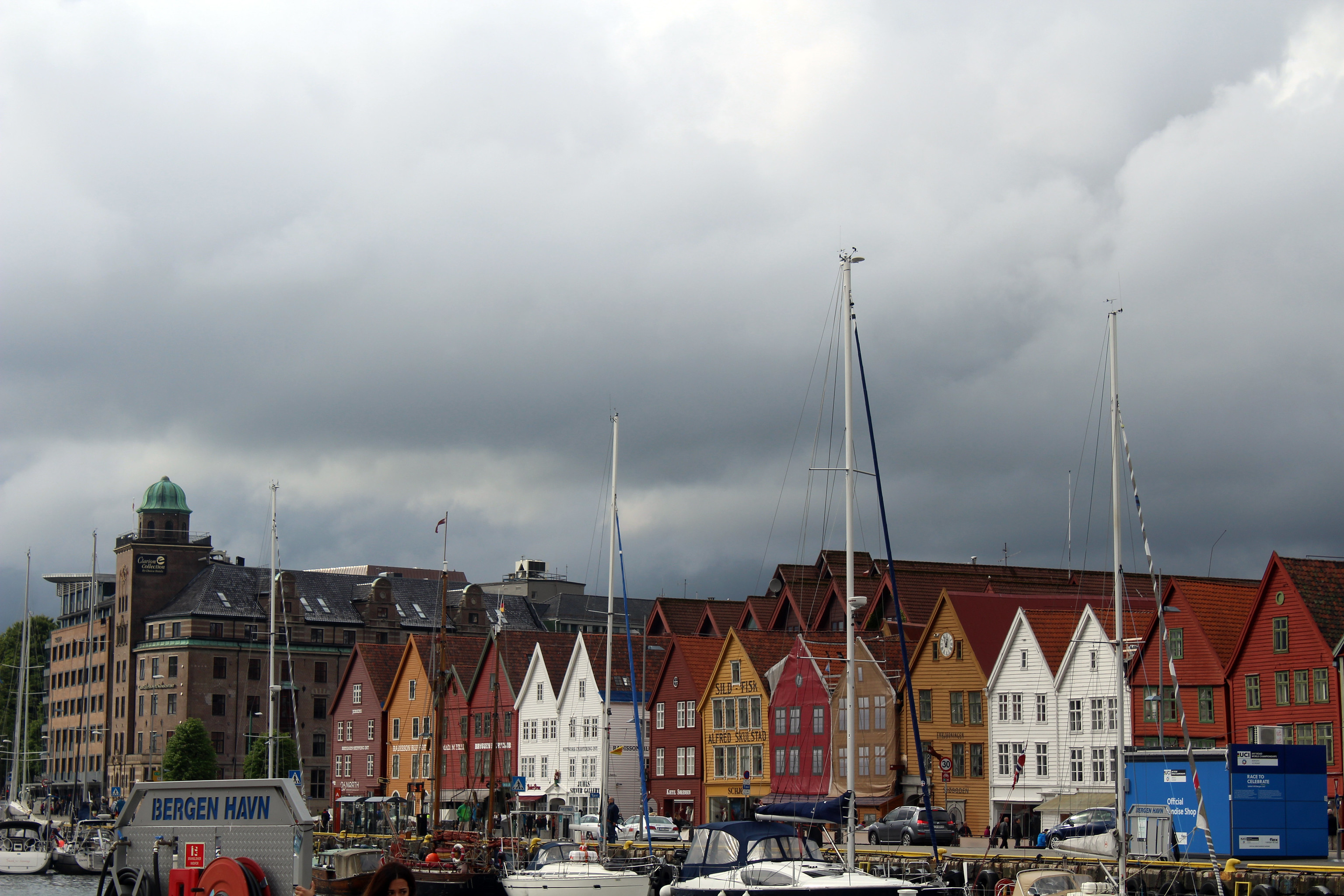 This isn’t vital, of course, but he’d working from a sketch (indeed, compare this, also dated 1914). This is a busy, crowded scene, strongly contrasting with deeper history of his usual works. There is a brightness to the Bryggen houses and the flag, and behind the Nykirken, but I’m sensing an ambivalence which might explain that I don’t think he ever returned to urban scenes.