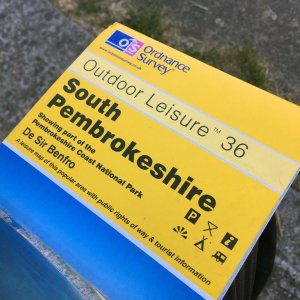 The last thing I wanted to see, when I pulled the map out of my shoulder bag, was OS Outdoor Leisure 36 for South Pembrokeshire.

It isn’t up to date by twenty years.

And more to the point, I am in Kent.

Well, I guess there are worse things to see. I just can’t think of them right now.

Not when my plan is to find a footpath from here to the woods.

I hadn’t meant to do a long walk on Friday – there was to be a walk to the butcher and cheese shop and to WH Smiths to see if there was a newer OS map for Canterbury and the Isle of Thanet than my 2010 printing and then a shorter work in the evening, but marking had been taking forever. I had a fish pie planned, but it would likely be too late to walk before and I could sneak a snack first.

I’ve mostly been walking to Tangerine Dream, which I have half a dozen albums of on an old iTouch I found in early lockdown. And I’ve been working to The Alan Parsons Project, which I mostly shut out. But I’ve been digging through old bands and musicians, alongside classical stuff, and listened to some of the solo work by former TD members. Edgar Froese sounds much like Tangerine Dream, surprise surprise, unlike Chris Franke, Peter Baumann or Steve Joliffe’s stuff.

It seems to be a collaboration with Peter Namlook (1960-2012) and later on Bill Laswell (b. 1955), neither of whom rings bells with me. And I can’t really see a Pink Floyd connection, which appears to be a joke dependent on them all using Moogs. Some of it was interesting, but it washed over me.

And so, eventually, I headed out to Hollow Lane, and to the newly (re?)discovered Wincheap Footpath, which parallels a road cut deep into the chalk and earth, and goes under the A2 to an outcrop of Thanington Without. This has become a frequent walk, since I discovered the route through St Jacob’s and under the A2 is blocked by the Saxon Fields estate being built. Extending to a nearby footpath, it’s 3000 steps from home, although curiously not 3,000 steps back.

Ten years ago, I’d got to that footpath from St Jacob’s and then somehow got back to the woodlands on Cokering Road near the rest of Thanington. I checked a likely route on my OS map – and then picked up the wrong map to navigate with.

Still, I had three hours of daylight, what could possibly go wrong? It’d be poor form to retrace my steps.

Funnily enough, on Sunday I’d mostly recreated a walk from my first week in Canterbury, which left me in the gloom, unclear whether I would be able to cross the river at Thanington. I could, but rather different to do mostly the same route in May sunshine.

The Wincheap Footpath fades into the pavement for New House Lane, and then moves to the field side of a hedge, with a clearly worn but uneven route. It doglegs a bit, and reaches a hedge, which may or may not have had a way marker. It was certainly a while since the last one. But, again, there is evidence of footsteps before me and it’s not o’erstepped to turn back, even if there are some radgie dogs behind me. A gap in the next hedge leaves me at a track, which I think is the farm’s driveway, so through the next hedge and onwards. 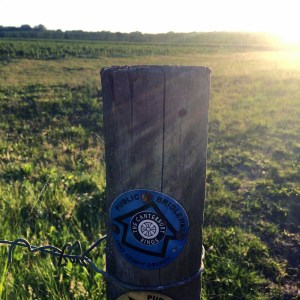 Then, finally, signage, evidence of a bridal way and it’s part of the Canterbury Rings, which I must investigate. This track transitions from worn earth to a mix of concrete and hardcore and pothole and the sun is straight in front of me so I am struggling to see where I am going. I pass crops and polytunnels and hedges of various sizes, and squint out for way markers. I have google maps, but it doesn’t show rights of way. There’s a farm, and tracks to my right – I can see the cathedral in the distance to my right so I’m not lost, I just don’t quite know where I am.

The track finally ends at the start of a different field of crops and there are two parallel worn patches, leading to the woods in front of me. This is Larkeyvalley Woods and for the first time in a mile or so the sun isn’t in my eyes. Rush’s 2112 ends on my iTouch and I switch back to Tangram. Can I enter the woods here?

Yes, I can, and there are posts with arrows, including the blue way markers. I need to bear at 1pm or thereabouts – to my right and then left. I went through these woods, but I think it was the best part of a decade ago. The temperature has dropped, but there is light, and I can see the roots soon enough so as not to trip.

No one else is here.

The northish-southish paths are flat, those at an angle seem to go up and down. There are bright lights ahead – the sinking sun – but I still have ninety minutes of light. I try not to think of The Blair Witch Project. Branches creek. There are no birds. This woodland was the gift to the city of Frank Hooker, former mayor and sheriff of the city, but unknown to Canterbury and possibly connected to the Almshouses – although Hooker’s Almhouses always made me assume it was accommodation for fallen women. There are now coloured arrows – but not always way markers. Occasionally I get to a clearing that may lead to the road, but I’d rather join it at the last possible moment as there is no pavement. 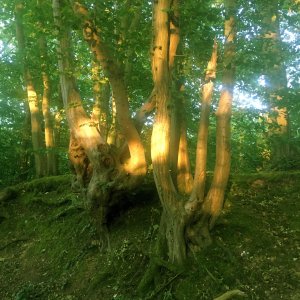 And after a curve that feels like I’m further away from the road and wondering if I’ve come back to where I started, the paths diverge at some stunning tree roots. Time to hit tarmac, methinks.

The road, marked by fly tipping, ascends steeply and there ahead of me are the joys of Strangers Lane and Thanington. I don’t want to join the A28. On my right are I suspected long converted barns and farmhouses and then the huge plot that is Saxon Fields. This is going to be massive.

I’m convinced there’s an path to the A2, but it’s been a while and I cross St Nicholas Road with no great hope that I won’t have to retrace my steps. It does look like a cul de sac, but there is a twichell, which gives the impression of being the rear access for the houses. But, no, it turns, it gets shadowy, but I’m back at the A2 and the traffic lights and junctions.

If I walk a little faster, I should hit the off licence and have some beer with a late supper.