“One always forgets a wolf along the way”

Sometimes there’s an itch, and obviously whilst I have books, I really ought to be reading about Bergen’s most famous private eye. Even if he has a wandering eye. And digging around t’Interwebs, I found all but one of the translated titles on a single non-BigSouthAmericanRiver. Mind you, I went back there for Consorts of Death.

And when the pile arrived, I discovered two things.

Firstly, Varg Veum – the name of the Øye – translates into wolf (a repeated source of mirth) and varg i veum translates into persona non grata or outcast. Deriving from vargr í véum, “wolf in a sacred place”. 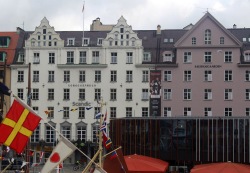 Secondly, Veum is one of three fictional detectives to have statues – and I must have taken a photograph and read the explanatory plaque, but I can’t find it. He’s leaning in a doorway to what was the Scandic Strand hotel and is now the Scandic Torget Bergen.

So, a few years have passed (two novels) and we get a hint that Veum does other work (insurance claims) to compensate for the sense that here and in Your Until Death he takes on cases that aren’t going to pay. Here, it all begins with a conversation with a retired detective, Hjalmar Nymark, who keen to re-examine two cold cases: a suspicious and catastrophic fire at a paint factory in 1953 and the beating to death in 1971 of Harald Wulff, suspected of being a Gestapo collaborator, Rat Poison. Wulff, it turns out, also worked at the paint factory and his corpse was so disfigured that he could only be identified by the word of his girlfriend. There is a third crime – a missing homeless person.

As Veum’s interest is piqued, Nymark is badly injured by a hit and run, which is connected to a person with a signifying limp (very Oedipus?). Veum has to try and interest the police in three cases that are colder than cold, when they can barely afford to look at Nymark’s assault. The detective’s journey takes him down among the down and outs and into the villa of a shipping magnate’s brother, across a class spectrum and through the ups and downs of Bergen’s history since the Second World War. It also takes him to a series of corpses – someone is clearly a step ahead of him.

Veum still has an unfortunate eye for the ladies – less fantasising about kissing them – but he seems to be pulling himself together, drinking less akvavit (here translated after first mention as schnapps) and running more (and there’s a run back in Yours, of course). There’s less Chandler, but still unexpected moments:

These two buildings – the railway station and the library – had been constructed from the same material: large blocks of dark granite. Perhaps this had been done so that these redoubtable monuments to two of humanity’s virtues – restlessness and the thirst for knowledge – might survive the apocalypses which those who had lived at the beginning of the century had had the imagination to envisage. Here they stood, waiting for the neutron bomb. When all the human beings had been destroyed, perhaps they would continue to stand here: the railway station, with its eternal draughts, chilly and uncomfortable, even in midsummer; and the library with its shelves bulging with a knowledge that had turned out to be of little use after all. Invisible trains would pull out of the station, following eternal time-tables, along tracks that had long ago fallen into disrepair; and, through the empty library, the ghosts of timeless borrowers would flit silently from shelf to shelf, never removing a book, never reading a word.

There’s an ennui, a mutability, the buildings have a history or have replaced the past building, just as the weather is forever changing. There’s a dark romance to this all.

And the plot is rather gripping, as the witnesses die by age or murder most foul. There are capitalist villains to point to, and failing systems from social work to the police. The ending, as in Yours, is sudden, not quite a twist, but I begin to detect a pattern.