The journalist Joanna Moorhead knew that she had an older cousin, Prim, who was estranged from the rest of her family and was some kind of artist in Mexico. At a party, she discovered that Carrington was not only an artist, but one of the most respected artists in Mexico and was still alive. Moorhead decided to travel across the Atlantic to meet her and the two became friends, with Carrington agreeing that she could write a biography.

END_OF_DOCUMENT_TOKEN_TO_BE_REPLACED

I’ve already written a rather grumpy account of this exhibition, which has a few things that annoyed me. I should also add that the plinths bearing the sculptures could do with a second label describing the work, since sod’s law meant that on almost every occasion I would look at the other three sides first. Sometimes, of course, the label turns out to be on the wall. Grr.

I was fairly sure, however, that the work would transcend my caveats — and so, having read the catalogue, I went back for a second look. 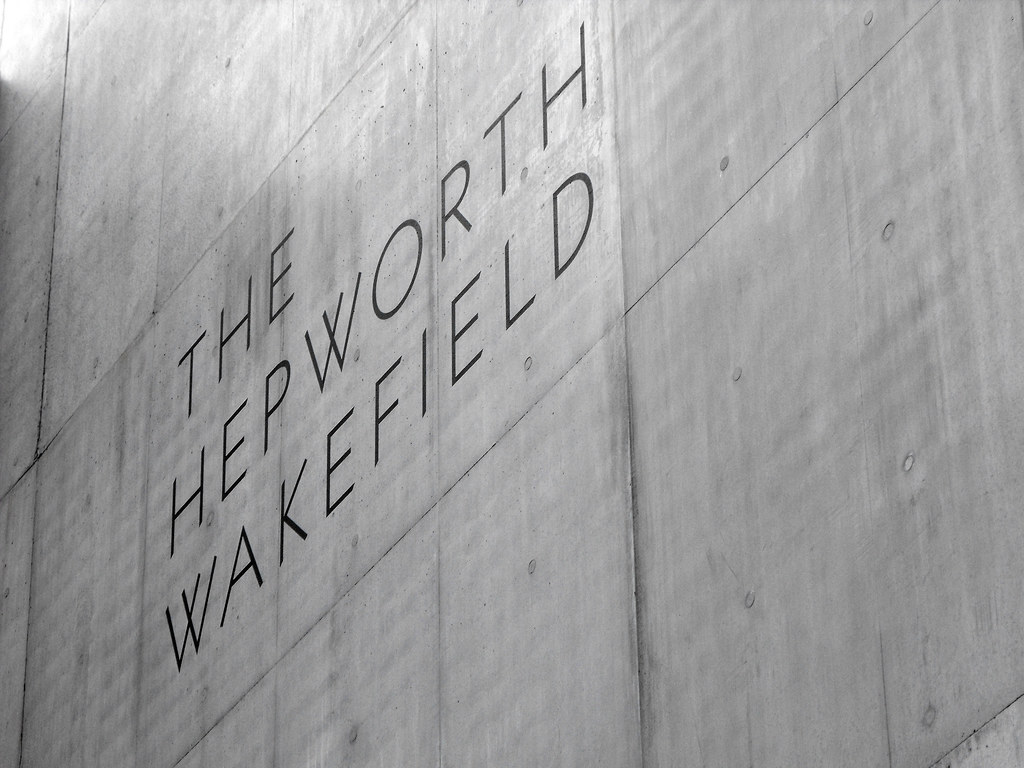 Meanwhile, up in Wakefield, the Hepworth is showing a film of the 1968 Tate Hepworth retrospective made by Bruce Beresford. What strikes me immediately about this is how many of the works of art are freely visible and not behind glass. I guess that she was still alive then and could have repaired anything that got broken — the insurance is presumably much higher now. It is so frustrating though. We’re told (she tells us? — and I get the sense from this film of Hepworth speaking unlike the bloody awful Dudley Ashton Shaw Sculpture in a Landscape documentary where a highly theatrical Cecil Day-Lewis intones Jacquetta Hawkes’s poetry in an odd example of barking despite having a dog of your own) that she is interested in the oval, the vertical and the human. From my notes — maybe from the film — I’ve written

And then I’ve added (and this is me): modern or romantic (and that is a ponder for another post).

So we’ll walk through the rooms again — beginning with the maze of vitrines. This is her early handcarvings, broadly speaking figurative, realist, mimetic. There are animals, torsos, seated figures and a baby. These works are direct carved on various kinds of wood and marble, and the missing name here is Leon Underwood, who seems to have been the master of the technique.

Hepworth’s shown here among her contemporaries, largely — husband John Skeaping, Henry Moore, Jacob Epstein and I noted two women, Ursula Edgcumbe and Elsie Henderson for future reference. The cynical side of me wonders if this downplays her — she was not unique. Skeaping’s Buffalo (1930) in lapis lazuli is beautiful and I think her side by side doves (1927) are better than Epstein’s one on top of the other (1914-15), but frankly you want your Picasso for doves and Epstein’s strengths lie elsewhere. The positive side is that she can hold her own in a wider community of sculptors between the wars. Infant (1929) is perhaps the most striking, the narrow Torso (1932), made from African blackwood and more like a totem, is the most Hepworthian.

By this point, of course, she had been born in Wakefield in 1903 and studied art in Leeds (meeting that Henry Moore chappy), moving to London where it was as cheap and as easy to get to Paris and Europe than back to Yorkshire. (There’s your north/south divide in a nutshell.) She was runner up to a prize that took her to Italy and which was to inspire her work and led her to marry the actual winner, John Skeaping.

She split from Skeaping in 1933 — the catalogue suggests in part that he was not sympathetic to her Christian Science — and had already met Ben Nicholson who at that point (1931) was married to the artist Winifred Nicholson. The two became lovers and moved in together. So in the second room we have the fruits of their lives together, with artists of different ages inspiring each other. The cynical reading is he helped her, the radical reading is she helped her. I write as a fan of Ben Nicholson — who triangulated romantic landscape, still life, abstraction and the faux naïf. His landscapes flatten into abstraction, and through the 1920s and 1930s the shapes became simplified into squares and rectangles — in time he met with Mondrian, although I think the link was more through Winifred. In time he removed colour, to produce a kind of white, almost flat, sculpture. His art seems to be an exploration of how much can be removed from an image and remain something you can see.

It has to be said that the influence of Hepworth on Nicholson is more obvious than the reverse — I’d be clearer in seeing her as a muse to him than vice versa. Throughout his pictures there are a series of double faces in profile, reduced to lines, intersecting, overlapping, Mr and Mrs. We see this motif in her self portrait in sonogram, and perhaps in one of the sculptures where the face appears to be two intersecting faces. It wasn’t immediately clear what else aesthetically she was getting out of the deal, beyond shifting to a point when she gave more abstract descriptive names for her work. Perhaps he gave her a scratchier sensibility. He was apparently more sympathetic to her religious beliefs than Skeaping had been.

With Nicholson she travelled again in mainland Europe, meeting Hans Arp, Pablo Picasso and Piet Mondrian. She contributed photos of her work to art journals such as Circle and Abstraction-Création (which included Marlow Moss, I see, and had odd ideas about alphabetical order). Mondrian was later to live downstairs from them in London, before his final move to New York. A lot of her pieces of the later 1930s seem to be two smooth pieces — often discs, placed together on a plinth. Apparently both pieces weren’t necessarily fixed, so a degree of adjustment could then be made. Among these pieces were works called Mother and Child — the Madonna and Child trope being oddly missing from the first room — although apparently she broke from tradition by having these as distinct rather than single pieces.

In 1943, she seems to have started adding string to her work. I seem to recall Moore did something similar, but I don’t know who got there first. Sculpture and Colour (Oval Form) Pale Blue and Red (see what I mean about those titles?) is white, almost eye shaped, but hollowed out with two holes. In one you can see the blue interior, and red strings from the edge of the hole to a single, vanishing, point. It is as if goes to infinity. Through the other, side, hole, you can see the strings from a different angle.

By the fourth room we’re up to the Second World War. One side has some of the drawings and paintings she did in a hospital of various operations, after her daughter was ill, apparently intrigued by the similarities between doctors’ and artists’ hands — and I think I saw more of these at Mascalls Gallery once. You need a strong nerve. Another wall has more abstract pieces — the exegetical text tells us she didn’t have time or space for more during the war, but the Hepworth in Wakefield notes the way that she used two dimensional work as a way into sculpture as well as on its own merits. But central to the room are four pieces of carved wood, Pendour (1947), Pelagos (1946), Wave (1943-44) and Oval Sculpture (1943), some plane, some elm, all but hollowed out and curled. They perhaps have the look of hazelnuts nibbled by squirrels, but are beautiful and the best pieces in the exhibition.

By the fifth room time begins to trip over itself. At some point she’s moved to St Ives and has a studio where she lives with a garden space and has rented the Palais de Danse as a second studio. She has become more ambitious, wanting to make bigger pieces; the catalogue notes her wish to crack America. Around three walls we see photos of some of her works in the studio and in situ, her big pieces for Mullard electronics (1956), John Lewis (1963) and the United Nations (1961-64), and we also see her montages imagining sculpture in rural or modernist locations. This is also the room with the ropey documentary.

Behind it, the exhibition redeems itself — four pieces made from a heavy African wood called guarer. The catalogue explains there is a mystery as to who got the wood for her and who paid for it, and what happened to the parts left over. They are larger cousins to the wooden pieces in the previous room; they seem to be experiments in how much you can take away from a form and still have some form.

Ah, you can look, but you mustn’t touch…

Finally, there’s the recreation of the Rietveld Pavilion (1956); concrete air bricks for a wall, partly filled in, some kind of wooden roof, and (here) an end wall purporting to be forest. Hepworth’s work was shown here in 1965 and since. It doesn’t fool us we’re outside, but there are five or so bronze pieces. Some have forms within forms, are twisted, some might be weathered anvils. These are clearly not mimetic, but nor do they feel organic — they are their own thing. Their sublime beauty is enough to make you forget that it’s not until 1975 that Hepworth died, in a fire. 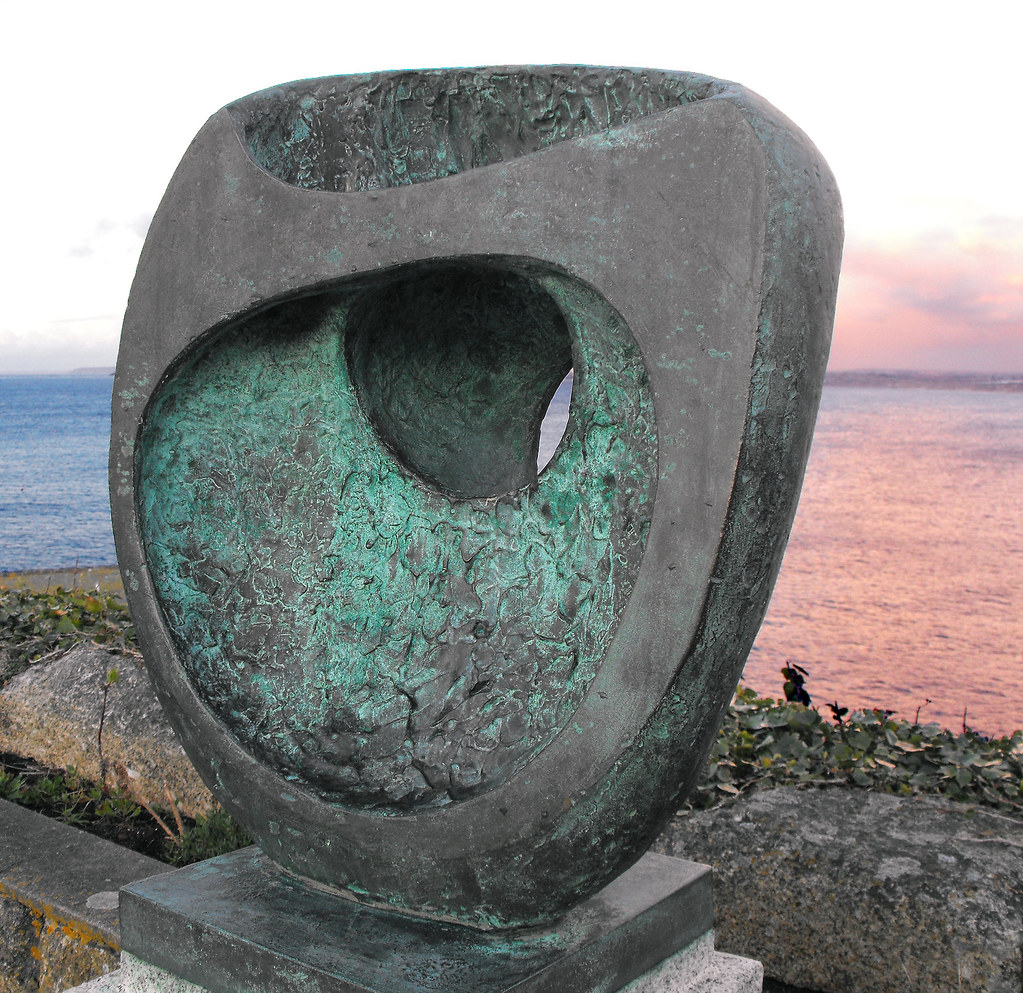 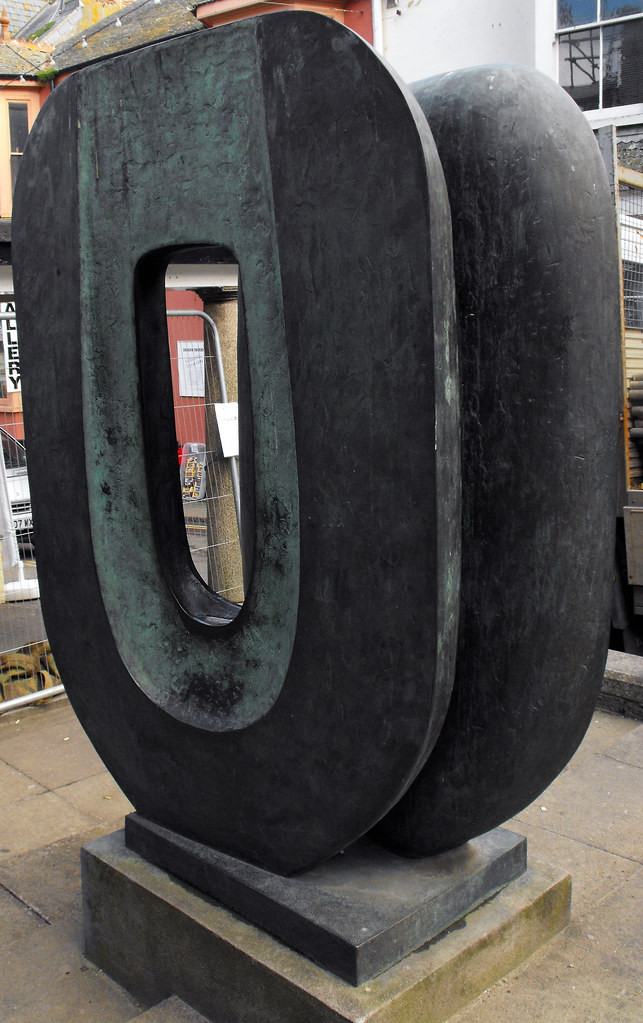 But Hepworth is at her best in St Ives and Wakefield and the Yorkshire Sculpture Park and Edinburgh Botanical Gardens and at the front of Tate Britain and in a garden on Attebury Street.