And so somewhere along the line I heard that a once in a lifetime exhibition of the work of Hieronymus Bosch was being shown in his home town of Den Bosch. Somewhat nervously, I decided that I wanted to go, although I nearly left it too late to book a slot. I booked a hotel in Amsterdam, a city I’d wanted to visit for years, and could have got to from Hull, had I spare time and spare cash and the same time.

So I went, and did the Rijksmuseum and the Van Gogh and took the train down to Den Bosch for what was a crowded but fantastic exhibition. I paid for it the next day, as my knee decided to pack up.

But I took lots of notes and thought about it and then a few weeks’ later, going away for a weekend, put the notebook in a safe place.

One day it will reemerge.

Along with dozens of rolls of sellotape and, rather worryingly, two bananas from Sunday.

But, post-Caravaggio and Shaw, I found myself in the National and remembered that they have one canvas, one of two paintings that I don’t think were in the exhibition.

Bosch painted various stages in the life of Christ, and this is one of two versions of the image associated with the pre-crucifixion sequence. Going to the Tyndale Version, which evidently postdates the painting, we read:

1 Then Pylate toke Iesus and scourged him. 2 And ye soudiers wounde a croune of thornes and put it on his heed. And they dyd on him a purple garment 3 and sayd: hayll kynge of the Iewes: and they smote him on the face. 4 Pylate went forthe agayne and sayde vnto them: beholde I bringe him forth to you that ye maye knowe that I fynde no faute in him. 5 Then came Iesus forthe wearynge a croune of thorne and a robe of purple.

Yet here Christ is in a white robe, with ginger hair, looking somewhere between Damien H and Douglas Henshall, his head tipped slightly to his right, looking at us. He is pale and gentle, and clearly the centre of the picture: the eye lines of the four men surrounding him are directed toward him. His eyes form a parallel with the arrow in the green head dress of the man at the top left of the picture, right on the edges of the frame. At least, I assume it’s an arrow. Is this prefiguring the spear piercing Christ’s side or the martyrdom of St Sebastian?

Green head dress guy has a green robe and his right hand is in armour, allowing him to hold a crown of thorns with impunity. The crown is a parody of a halo, of course, marking Christ’s divinity.

Moving anti-clockwise to the bottom right is an older, white-bearded man, blue robe with a red to pink wrap that also covers his head. If you look closely, there’s a crescent moon on this, which seems a little early to be an Islamic symbol, but perhaps is meant to be. In his left hand is a wooden pole, which might be a walking stick (but seems too bulky) or might be sharpened at the other end. His right hand is resting on Christ.

Moving to the bottom right of the frame is a man of a similar age, not quite a mirror image, but with a red/pink shirt, with cuffs, and a black/brown hood, with a similar undergarment. He is the only one to be really looking up at Christ, but then one has to be in the not quite square alignment of heads. I can’t quite make out what he’s doing — he’s grasping something, but I don’t think it’s Christ’s arm as I first read it because he has an oddly place right hand next to crescent guy. Is he rending the cloak?

And finally, the fourth guy, with another cane — is this a marker of office? — in his left hand. Are two of them left handed? Does that tap into sinistral superstitions? He has an impressive hat, either fur or woollen, that echoes the curve of the green headdress. Pinned to this is an acorn on oak leaves, an extraordinary piece of trompe l’œil bravado; I tried to stand to the right of the painting to just confirm it was indeed flat. There’s something odd on his left shoulder — it looks like a satellite dish but plainly can’t be. His forehead is crinkled, along with much of his face. Finally, there’s his collar, a fetishistic collar, like a dog collar but with spikes. Perhaps this is defensive — no one would try to strangle him — and certainly it echoes the crown of thorns whose lower edge would just be in line could we see it.

This is a passive Christ, resigned, unresisting, trapped by these four older men.

And here we have the same theme, but seen as part of a triptych and thought since about 1900 to be in the style of rather than by Bosch, despite a signature on the work. All three panels are located in yellow or gold backgrounds, circular in the centre, oval on the wings, with grisaille fights between angels and demons in the exterior corners.

The central Crowning has an already crowned Christ, white cloak half off, and a thinner, more suffering, face. The cloak is being rent by a man with a left arm in armour (the right arm is not visible) and pinkish red material over the arm and a darker shirt and hat. On the sleeve is the figure of an owl, a Boschian symbol we shall keep returning to. The line of his arm — which looks anatomically awkward — parallels the line of his two eyes, and a pole that takes us up to Christ’s left eye and the two arrows of the green hat of the guy holding the pole. This green hatted guy is fatter and bolder than the Bosch equivalent and is still in Christ’s left. A thin line that might be an arrow and might be a hem, goes down there centre of his dark brown coat, in front of his staff and hand. What is presumably his right leg is placed to Christ’s right, but hardly seems to belong to him at all. Behind him is a figure in red and with a red hat and a horn. To Christ’s right, perhaps some distant back, is Pontius Pilate in a red cloak and black shirt with a red onion shaped hat and a sword and Caiaphas, black cloak with red lining, and a white tunic beneath.

The left hand panel, the Arrest, shows a struggle, four soldiers jostling to arrest Christ, hands and arms tangled. Christ himself seems almost lost in the composition, aside from the pallor of his face (and it doesn’t quite look like the same man). Towering above the other figures is the disciple James, burning taper in his right hand and a wide hat with plant in his head. The smoke of the taper follows the curve of the oval. Finally, most interestingly, Peter is the foreground is about to slice off an ear with a curved blade, his arms and red clothing following the bottom curve. He feels a bit jammed in, though, dictated more by the painting space than his body.

Finally, on the right, the flagellation. Christ is now naked, his torso in the lower half of the oval, like the central panel looking at us. The four faces of his attackers almost form a rhomboid, with a dominance of long, bent noses and snarls. On the left is a figure in red, evidentially holding Christ with a hand on his shoulder, the other almost tweaking a nipple. In the equivalent space to James, more left, is a figure holding a whip with almost barbed wire, whereas to the right is a fat bald figure, holding spiky sticks, perhaps birch, ready to thrash, but the space isn’t right. His knee is visible on Christ’s left, with a tattooed bee. The lower right has a a hooded figure, seemingly pulling on the rope or lash that is wrapped around Christ. Again, the anatomy doesn’t feel right — perhaps it is apt that the scene is grotesque, but it isn’t quite right. 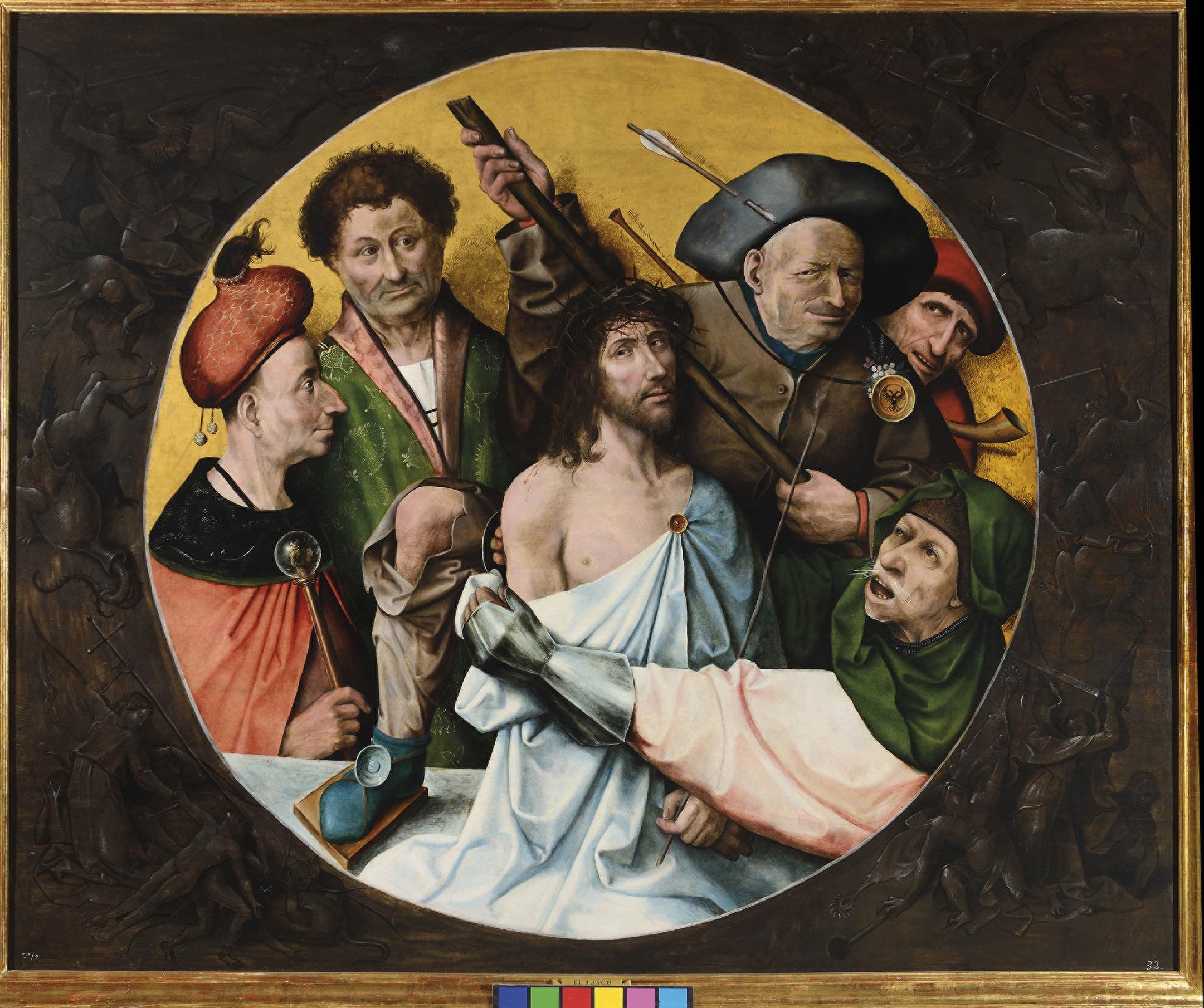 There is a version of the central panel which I’ve yet to see, where the circle has become more orange (the effect of age?) and Pilate is holding a thin staff with a spherical head. Caiaphas, meanwhile, seems to be modelled on Colin Firth and the torturers seem more like they are posing for a selfie. I can’t quite read Christ’s expression. He is showing us his best side, grinning at us. Oh dear.