But if you follow along the Marsh Link from Ashford International, you cross the boundary into Sussex and Rye, with Paul Nash and Edward Burra, Hastings with the Jedward Gallery, Bexhill on Sea with the De La Warr Pavilion, Eastbourne with the Towner and Eric Ravilious, Brighton with the Royal Pavilion and Art Gallery — and then, beyond, to Chichester and the Pallant. That’s five galleries, specialising in the twentieth century. And then, inland, further homesteads of art, rural Modernism on rest and recreation from London. Modernism on sea, Modernism on the downs.

Two Temple Place, an odd pop-up gallery that specialises in an annual spring exhibition gathering art from single galleries or a group, has the interesting idea of bringing together all of these islands of Modernity, not necessarily great art, but interesting, and a whetting of the appetite for day trips into enemy territory for an incomer of Kent (or am I a Kentish incomer — I was evidently from North of the Medway).

At some point I will add more pictures or links
The first room begins with the Ditchling community around the sculptor and typographer Eric Gill, alternately best known for his BBC graphics and his deeply problematic incestuous relationship with his daughter. He established the Guild of St Joseph and St Dominic, an arts and craftsty movement which presumably draws on Catholic dogma. Beyond Gill there is Joseph Cribb, Desmond Chute, Hilary Pepler and, the one I’ve heard of, David Jones (one day I will find my notes on him). There are religious statues and crucifixes, a book on birth control (against it I suspect). The Joneses are the best stuff — a painting, Madonna and Child in a Landscape (1921-22) relocates the gospel to the Downs, with a chunky mother and child, but halos on both. It is medieval Modernism. Then there’s The Garden Enclosed (1924), the title quoting Song of Solomon, 4, v.12 “A garden inclosed is my sister, my spouse”. The garden is a sacred place, an Eden, a place of virginity. The foreground is a couple kissing, Jones and Petra Gill, just engaged, although they were not to marry. Note her red dress and her red cheeks, with the geese running away from them into the trees. Little Red Riding Hood? It’s not good.

Remind me of the geese when I talk of Nikolai Astrup.

Meanwhile, near Firl, is Charleston, country retreat of the Bloomsbury set. This is the year of Duncan Grant and Vanessa Bell — and eventually I’ll get to Dulwich to see their show. Venus and Adonis (1914) has a gargantuan female and tiny man, fleeing. She is all body and flesh and breasts, with a small head. There’s a painted linen chest from 1917 which has inside the lid not Leda and the Swan, but Leda and the Duck. Either way, it’s a rape, the catalogue suggesting a hint of Virginia Woolf’s molestation by George Duckworth, a half-brother. And there’s a somewhat controversial Bathers by the Pond (1920-21), male nudes and a boat, put together with spotty paintwork, distinctly homoerotic.

In the lobby at the foot of the stairs is space devoted to collector and collaborator with Salvador Dalí, Edward James: “Edward James was a prolific although under-rated poet. He published his own poetry, as well as the work of others. The fist was the stamp of the Edward James Press.” Did he have a hand fetish, one wonders? There’s the Mae West Sofa — lips — he created with Dalí, the Tilly Losch footprint carpet, commissioned after he divorced the dancer… he was all about the body parts…

Upstairs to Peggy Angus’s Furlongs, near Lewes, a patron and (I hadn’t realised) designer and painter (see her John Piper and Cat (1937)). There’s work by Ravilious, Piper, and architect Serge Chermayeff and photographer Lázló Moholy-Nagy, two emigrés. She herself was born in Chile. Chermayeff, along with Erich Mendelsohn, were commissioned by the Earl De La Warr to build a pavilion at Bexhill — a controversial choice of alien architects designing an alien looking building intended as a holiday space to make urban labour bearable. There’s a model of the pavilion — familiar enough but with a bridge to a circular pool and a double decker pier to the sea. Was this front part built and lost? 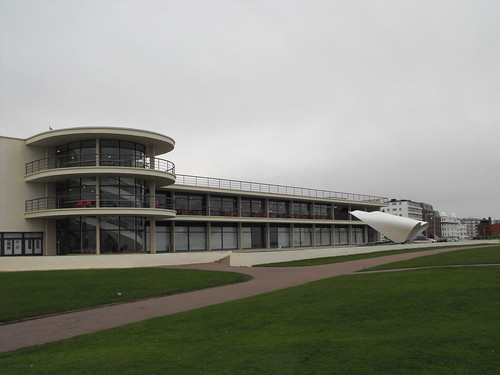 And then into the final room and the designs for a church at Berwick by Vanessa Bell and Duncan Grant. There are beautiful sketches by Hans Feibusch — someone I’ve come across since, maybe at Pallant House of the crucifixion. For atheists and agnostics, they make pretty symbols.

We get at last to Rye and a couple of Burra — Landscape Near Rye (1943-45), a watercolour of the back end of a cart, a skull between the … prongy things, a convex landscape, black clouds, what with it being war. Ropes and Lorries (1942-43) is a two sheet watercolour of Rye — two ropes, a swing, hanging from a tree flanked by lorries, utterly nightmarish and baffling. And The Churchyard, Rye (1959-61), with a central V demarcated by a wall — a figure and a second, maybe a shadow but it doesn’t match, walking outside — several silhouettes inside the cemetery, merging with trees, and overlapping white gravestones. Iain Sinclair calls it a tribute to Burra’s friend Malcolm Lowry, who more or less drank himself to death. Perhaps.

We’re into unknown territory — Grace Pailthorpe and Reuben Mednikoff, the latter adopted by the former, with their colourful surreal, psychoanalytical paintings. Edith Rimmington who I later saw with Athena art at the Pallant, but here represented by photos of Bexhill and environs, suggestive but baffling.

There’s a more familiar photographer to finish on — Lee Miller at the Farley’s Farm owned by collector and artist Roland Penrose. Her View from Window at Farley Farm House, East Sussex, England (1952) is said to show a claustrophobia with its window frame — maybe, but to me it echoes the picture through a rip in the tent in a desert she’d taken fifteen years earlier, Portrait of Space, Al Bulwayeb, near Siwa, Egypt (1937). There’s a playful picture of Saul Steinberg drawing the Long Man of Wilmington and of Picasso by a signpost for Chiddingly and Laughton/Golden Cross. The Modernism of Sussex is never far from the domestic.

Perhaps that’s the point — some of these artists engaged with war (Ravilious, Jones, Miller), others were conscientious objectors (Grant) or had been displaced by war. According to their age, there was no way of avoiding the horrors of the First and Second World Wars, the First being just out of earshot (but not in Folkestone or Dover), the Second threatening to invade that coast. And all of this is a land marked with chalk downs and ancient art and Regency and Victorian seaside pleasures and is eventually to produce the cosy but not cosy Dads Army of the somewhere-near-Eastbourne Walmington-on-Sea. The void of Modernism was confronted among the teacups and the chintz.

And Mae West’s lips as sofa.

The Heimlich is the hearth of the Unheimlich.