I guess there’s always been a contradiction at the heart of appreciating bands which go through multiple line ups. I don’t hold to the school of thought that Pink Floyd stopped when Syd left — but I think I prefer a Yes with a Jon Anderson to one without, even if, say, Chris Squire drove the sound. For me the best Tangerine Dream albums are the Froese-Franke-Baumann ones, broadly speaking the Virgin years, but those with Schmoelling come close. And I like Klaus Schulze and Steve Joliffe’s solo works more than Franke or Baumann’s.

Are they always Tangerine Dream? END_OF_DOCUMENT_TOKEN_TO_BE_REPLACED 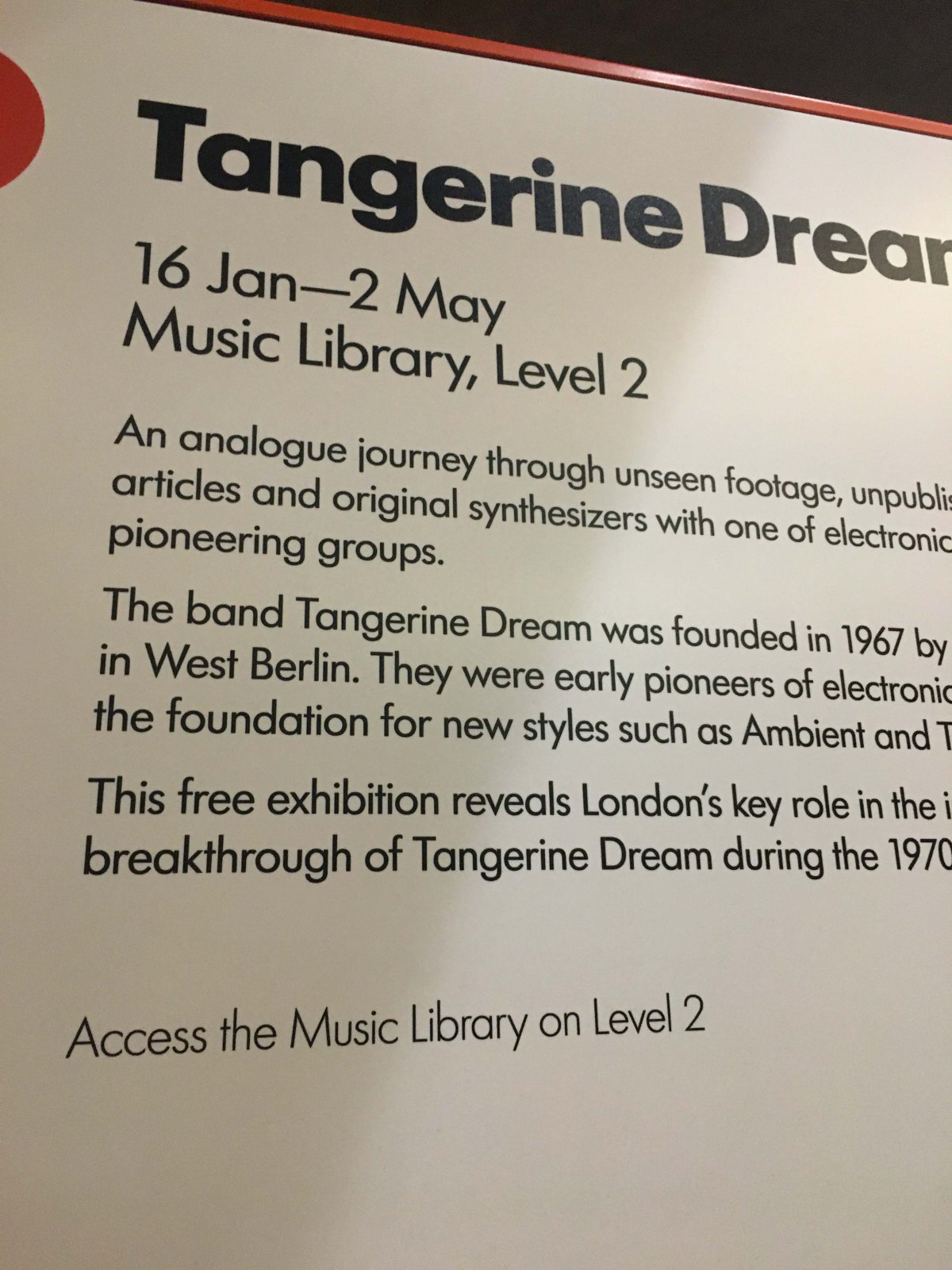 So, the Barbican – aka the alcohol-free concert hall – was heaving and so the slightly complicated but with good sight lines for a rendezvous foyer turned out not to be a smart move. Especially when Dennis was playing havoc with the trains. But that didn’t dissuade the thousands of people who had descended for a wellness fête (and who were queueing in their hundreds for the ladies loos hidden in the bowels of the building).
END_OF_DOCUMENT_TOKEN_TO_BE_REPLACED

So I didn’t need to be at the theatre until 7.15 for a 7.45 start, so I thought a HS1 to Saint P would put me on the Victoria to the Royal Academy of Arts, a coffee and expotition booking, the Victoria down to Pimlico and t’Tate t’Britain, Victoria/Northern to Borough and The Royal Oak for an annual half of Harvey’s Christmas Ale, with time for a walk to a Caffè Nerd near London Bridge to sober up for the theatre.

I saw and enjoyed a preview of the Dalì/Duchamp exhibition and will write that up, but I took a second look and my sense that Dalì is the better artist but Duchamp the more interesting one stays. And I got to admire the Christ of Saint John of the Cross again, having not seen it (obviously) Glasgow.

Meanwhile, the From Life show is a group show based on the idea of art taken from life that begins with a horse’s arse (literarily) and is dominated by art student images of Iggy Pop curated by Jeremy Deller, a selection of Gillian Wearing portraits and two instantly identifiable sculptures by Yinka Shonibare MBE, based on laser scans of two statues (or casts?) in The Academy collection

But what drew my attention were three portraits by Jonathan Yeo, the central one being a Paolozzi style sculpture. I didn’t have a predisposition to like Yeo, in a case perhaps of guilt by association, having seen portraits of luminaries such as Andrew Lloyd Webber, Rupert Murdoch, the Duchess of Cornwall and Tony Blair at the Laing Art Gallery. But these two paintings were based on scans of his face and body and were called The Unteleported Man and The Simulacra.

Clearly a Philip K. Dick fan. And quite striking.

A couple of hours later I made it to the Tate and finally did the Rachel Whiteread exhibition. The first woman to win the Turner Prize, she is probably best known for Ghost, the interior of a demolished house, and her Fourth Plinth commission, a cast of the plinth.

A room full of her stuff is a little overwhelming, or perhaps underwhelming. And it is one room —the Tate having removed the walls that usually guide you through the galleries. It is the same idea repeated: lots of casts of doors or mattresses, a cast of Room 101, a cast of bookshelves, a cast of a staircase… you get the idea. I’m glad I didn’t pay, for I clearly wasn’t in the mood and I had to go in search of colour in paintings to detox. I’ve liked works individually, but a retrospective made me recall the sublime Roger Hiorns copper sulphate cast of a council flat, Seizure.

In fact, a proper Whiteread retrospective would be a cast of Tate Britain.

And then in the shop I noticed a copy of Dick’s Confessions of a Crap Artist.

Yes, obviously, I know “crap” isn’t acting as the emphasised adjective — Jack Isidore is not an artist who is crap and I’m not saying that Whiteread is an artist who is… But I couldn’t immediately see why the book was there.

In a sense she creates alternate realities, making the space solid… but why that book? What did I miss?