Rembrandt Harmensz. van Rijn has all the makings of a tragic hero — with perhaps his fatal flaw of pride. He seems to have a meteoric rise — but as with the tulip bulb market, the bottom fell out and he, overstretched, crashed. He gets up to a couple of nasties — but that is a tale for another day.

Leiden, 1606. This was the second largest city in the Dutch Republic, after Amsterdam, and prospered through textiles. It had been home to a university since 1575, a reward from William I of Orange for their role in the Dutch Revolt. The van Rijn family were millers, supplying a brewery, but as a younger son (the ninth child of ten), Rembrandt was free not to follow in his father’s footsteps. He went to Latin School and was signed up to the University of Leiden at the age of twelve, but his talent for painting meant that he was apprenticed to Jacob Isaacszoon van Swanenburg (1571-1638) in 1620 for three years.

Van Swanenburg was from a family of painters and had been born in Leiden, before going to Italy to train and work, focusing on scenes in hell and cityscapes. But not being a Catholic and being interested in witches, meant that it was dangerous to remain and he moved back to Leiden in early 1618. It is perhaps his use of light and other, layered, painting techniques that had most impact on Rembrandt.

The young artist moved to Amsterdam, where he studied with Pieter Lastman (1583-1633) for six months, and opened his own studio. Lastman had studied in Italy, and had been influenced by Caravaggio, which would have taught Rembrandt about the use of light. By 1625, he was back in Leiden, taking commissions, and possibly working in the same studio as Jan Lievens (1607–1674), who had also been trained by Lastman.

To be honest, some of his early paintings are … awkward. There’s a series of allegory paintings about the senses (sight, hearing, touch, smell survive), which cram too many figures into a portrait frame. 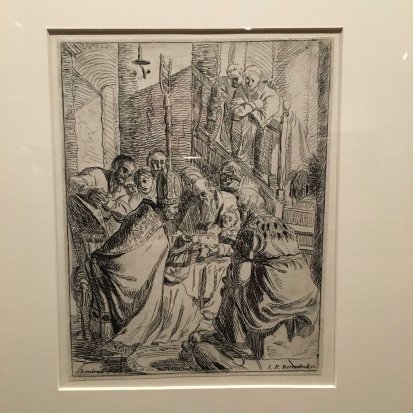 There is a dynamism to Christ Driving the Money-changers from the Temple (1626) and it’s clearly colourful, but everyone seems too close together, the context is lost. Similarly, from about the same year, The Circumcision etching seems too busy, with crossing diagonals of staircases, architecture and the staircase. The bodies don’t quite fit in the plane properly. Rembrandt had been taught to etch by the Haarlem-based Jan Pietersz Berendrecht — who seems to have corrected Rembrandt — and it was a skill he was to soon master.

But the talent is developing. He produces History Painting, not so much a title, more of a genre, and we see a pile of abandoned shields and weapons, and soldiers in varying degrees of obeisance to a fat man with a pointy stick. Look careful at that stick and the face behind it — then compare the next painting above. Rembrandt has snuck himself in to history and was producer of a whole range of self-portraits over the decades. (Lievens is also meant to be there, too, in the shadows — perhaps with the feather?)

This early self-portrait says rock artist produces solo album — the clever shadowing of his eyes, the complexity of the curly hair, and all the more striking for being a small painting. In his paintings and especially his etchings he practices and practices such images, and seems to love to dress up. He also paints his family, especially his father and mother. It’s assumed that Old Woman, with the golden threads in her hood, her starched collar and fury jacket, is his mother, Neeltgen Willensdr, and you might imagine she’d be happy to sit for a telented son, if not necessarily flattered by the image. But it might be a tronie, an artistic type, rather than a faithful reproduction. 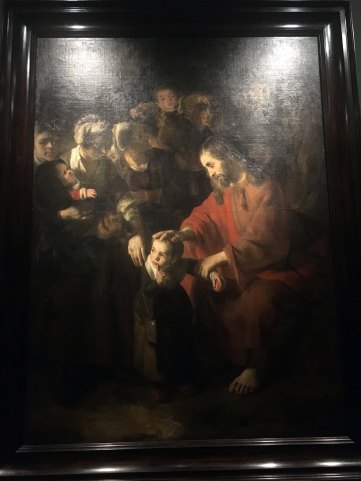 A recurring thread through Rembrandt’s career — alongside the portraits and self-portraits — is religious paintings, although his own beliefs seem unclear. A painting from about 1627-28, Let the Little Children Come to Me, shows Christ in a pink robe, surrounded by mothers and children, with a slightly alarming child nude in the foreground. This painting had been noticed by Dutch art dealer Jan Six (descendent of, er, Jan Six, who had been painted by Rembrandt) and in particular the face at the topic of the canvas, sort of within Christ’s eye line and looking at us: a twenty-something Rembrandt. The painting had suffered much over painting and the child’s modesty had been covered up, with Six convinced this is the real thing;  X-ray and MRI scans seem to support the claim. Incidentally, the painting may have been the inspiration for Christ Blessing the Children (1652), by Rembrandt pupil Nicolaes Maes, which I recently saw in London and which had at some point been attribued to London.

Is he tucked away in the background of Judas Repentant, Returning the Thirty Pieces of Silver? This painting was in the studio when Constantijn Huygens, Lord of Zuilichem (1596–1687)came visiting in the late 1620s. Huygens was secretary to Frederik Hendrik (1584–1647), the sovereign prince of Orange, and was responsible for building up court life and the art collection. He commissioned Lievens to produce a portrait and Rembrandt to paint his brother, Maurits Huygens (1595-1642). But it was Judas that blew him away:

The singular gesture of the despairing Judas—leaving aside the many fascinating figures in this one painting—that one furious Judas, howling, praying for mercy, but devoid of hope, all traces of hope erased from his countenance, his appearance frightening, his hair torn, his garment rent, his limbs twisted, his hands clenched bloodlessly tight, fallen prostrate on his knees on a blind impulse, his whole body contorted in wretched hideousness. Such I place against all the elegance that has been produced throughout the ages. … I maintain that it did not occur to Protagenes, Appeles or Parrhasius, nor could it occur to them were they return to earth that (I am amazed simply to report this) a youth, a Dutchman, a beardless miller, could bring together so much in one human figure and express what is universal. All honor to thee, my Rembrandt!

Huygens was able to act as an agent for Rembrandt — gaining him Frederik Hendrik as a patron — encouraging him to become a new Rubens, and to visit Italy to see proper paintings — Rembrandt seems to have ignored this latter piece of advice.

You begin to notice the way that light is being used to illuminate and the way in which shadow can underscore the composition. 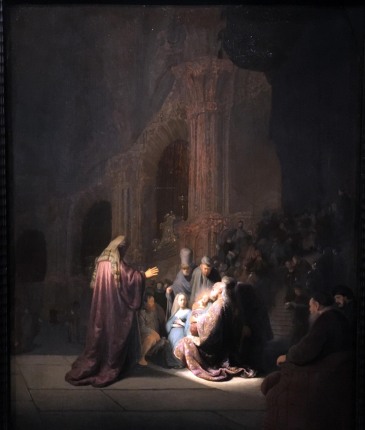 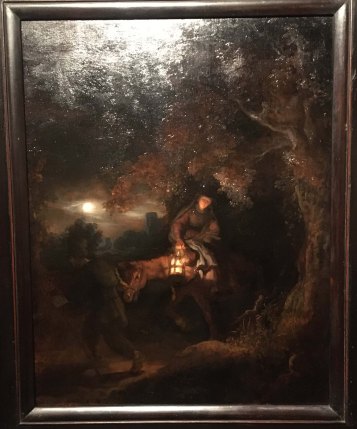 You can see this in the light falling over Christ in Simeon in the Temple (aka Simeon’s Song of Praise). Joseph and Mary have taken Christ for a blessing to the pious Simeon, who had been promised by God that he would not die until he saw saviour. Whist there is clearly light coming from the left — it’s on the back of the figure in purple and check the shadow — there’s a definite spooky light.

Then there’s the night of the Flight into Egypt (1634), one of a series of paintings of this topic Rembrandt did. There’s the light from Mary’s lamp and the moonlight from behind the clouds. As we get deeper into the 1630s, so this play with light becomes more prominent.

Rembrandt was seeking to build and capitalise on his brand and, whilst he could etch, he also engaged a professional printmaker and former apprentice based in Leiden, Jan Gillisz. van Vliet (1605–1668), to help with pieces small and large. The painting of The Baptism of the Eunuch (1626) — where Philip the Evangelist baptises an Ethiopian on the road to Gaza — seems to undergo a major transformation (I wonder if there was another canvas?).

Ecce Homo (1634) is a grisaille, a full-size preparatory designed to be made into an etching — apparently the only time Rembrandt did this and a huge success. Christ occupies the top right quadrant of the picture, not quite crossed by the poles, and is looking up to God. He is illuminated, as indeed as some of those arguing with Pilate. I note that the clock is missing from the etching.

You’ll notice the dog behind Philip — you’ll notice a poodle in The Artist in an Oriental Costume, with a Poodle at his Feet (1631), although the dog was added later in about 1633 (after Isaac de Jouderville (1612–1648), his apprentice, had made a copy). He’s still got the passion for dressing up — apparently the only time he has this costume, but he shows similar attire in portraits of others, but I think he’s putting on a bit of weight.  There’s another feathered hat, in Self-Portrait Wearing a White Feathered Bonnet (1635), although in 1968 it was excluded by Horst Gerson (1907–1978) from the oeuvre on stylistic grounds. The Rembrandt Research Project reversed this decision in 2013 — noting  the fall of the light on cheek and nose, and the obscuring beret. 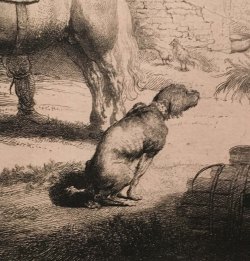 He does like his dogs though, as you can see from this addition to a 1633 etching of The Good Samaritan, which isn’t there in the 1630 canvas in the Wallace Collection. He’s not adverse to drawing or etching men or women dumping or pissing or couples having sex. All human life is here.

But Rembrandt was to make a tidy living by painting portraits in Amsterdam — this example is of a Young Woman in a Millstone Ruff and I’ll have to dig out the catalogue to see whether this is by him or his studio. Rembrandt lodged with Hendrick van Uylenburgh (1587–1661), an art dealer from 1631, and in 1634, married Hendrick’s cousin, Saskia van Uylenburgh (1612–1642). They rented a house in Nieuwe Doelenstraat and in 1639 bought a new house in Breestraat.

He was good for it.

Money was pouring in.

But th’s another story.’