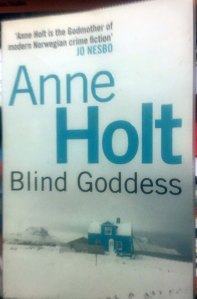 I’ve temporarily stopped reading Kjell Ola Dahl‘s Gunnarstranda and Frølich novels — which I wasn’t writing up — but then I’ve only read about two books this year, both catalogues. Noodling around Bigsouthamericanriver.con I found Anne Holt, who wrote the books (including Frukta inte, on which the Copernhagen-set Modus was based). A ex-lawyer, ex-journalist, ex minister of justice in the Norwegian government, this is her first novel.

Lawyer Karen Borg stumbles across the battered corpse of a drug dealer and is inexplicably called on to repesent the Dutch student, Han van der Kerch, who is the prime suspect. A few days later lawyer Hans Olsen is shot and Detective Inspector Hanne Wilhelmsen and the police attorney Håkon Sand suspect it is linked.

As do we, of course.

Borg has already been warned off the case by hot shot lawyer Peter Strup, and it seems likely that she is in danger; that doesn’t stop her going off grid to her country home (presumbly less impressive than the one on the front cover of a novel largely set in Oslo), even to Håkon who is an old university chum and new flame, despite being married. More witnesses die, evidence goes astray, there is a page in a secret code and there is a conspiracy going almost to the top.

This is the first of a series featuring Wilhelmsen, although the shifting viewpoint (including Old Criminal having I’ll take you down conversation with Young Criminal) makes this hard to realise. Strand probably gets the spotlight. And Wilhemsen may be a lesbian detective, but her partner doesn’t get more than a few lines of dialogue. I wonder if Holt was a little nervous and was trying a little too hard?

It’s twisty turny enough, mind, and I will certainly look out for Salige er de som tørster (Blessed Are Those Who Thirst), the next in the sequence.