I guess it’s unlikely (Tier 4) that I will see any more exhibitions before and so a year that began with Jarman and Freud didn’t continue with Van Eyck, Chagall and Astrup … but did manage to include Munch.

I got my money’s worth out of my Art Fund card, just about, and Tate membership and the RAA card makes life a little easier, but you need to be fast to catch the members’ previews.

I have a top ten which is — go figger — a) subjective and b) only mentions artists once.

The Tate was perhaps a little underwhelming — Blake works better on the page than the wall, Beardsley didn’t quite do it for me, Warhol is Warhol and Turner is showing us mostly what we ought to be able to see for free. Dora Maar just got edged out.

I also seem to be rubbish at writing exhibitions up.

10 Tracey Emin / Edvard Munch: The Loneliness of the Soul (Royal Academy of Arts)

Say what you will about Emin, but her works make second rate Munch look fantastic. I must come back to this — the paintings weren’t all bad, but I got more Cy Twombly than Munch. You never know, I might get to see this again in Oslo.

The rebranded and presumably refunded Jerwood had a Burra et al exhibition I missed and I returned to see if I liked Victor Pasmore any more than last time (spoiler: no). At the heart of this exhibition is Blake’s Guernica — and, no, that isn’t meant to be a joke. I was in tears.

Dulwich rather oddly twins twentieth-century exhibitions (mostly) with old masters and this brought together some familiar names and some people I’d never heard of. Endlessly fascinating, but shame about the other viewers. (Who say the same about me.)

A talented pupil of Rembrandt, who goes in his own direction. I went back several times (it was hidden in the ground floor galleries) and later spent time with his work at the Wallace Collection, the Ashmolean and the Queen’s Gallery, Buck House.

Dulwich sometimes ventures back pre-1900 and this was a stunning display of the ten years of Rembrandt climbing to his height. You could argue that Christ and St Mary Magdalen at the Tomb didn’t need buggering about with by adding a fake dawn lighting effect, or hold out and see it in much brighter light at the Queen’s Gallery. This just about edges out the Ashmolean Young Rembrandt and individual paintings at the Wallace Collection and National (London and Irish).

A stunning, overlooked, Belgian artist, whose work I must have seen in Brussels, and who would be worth a trip to Ostend for (where there are works by his crush James Ensor). I suspect overlooked because he did watercolours rather than oils.

I went to Dublin to see this — and nearly kicked myself as it was going to Manchester in April. Should have left it for the spring…. ha ha ha haha (etc.). They seemed unbothered that the catalogue had yet to be published, but having seen it I’m glad I didn’t have to carry it home. I spent a couple of hours going around it and returned a couple of days later. If I’m honest, he’s not a great artist, but he embraces multiple styles and is very moving at times. There was a small exhibition at The Garden Museum, with mainly late work and his gardening tools.

I think Riley was one of the first artists I saw, when I started going to see exhibitions more than twice a year and I was still wondering if actually I like design rather than art (see also: Ben Nicholson, Piet Mondrian.) This was a major retrospective, although I suspect I’ve seen most of them before. Like Rothko, she is an artist to surrender to. I can take or leave the spot paintings and, indeed, her colour work, but the stripes are the thing. However, I did like the cartoons — some of which were shown at one of the Mayfair Galleries.

There was a retrospective of Hockney’s portraits at the National Portrait Gallery and some contemporary works at a Mayfair Gallery — although the Lightbox single room in Woking gave a better sense of his range. Indeed, I think you could easily do three or four major coherent surveys and only repeat some of the sixties works. But this Eastbourne exhibition edges ahead because, in a rare move, I was accompanied by a friend, and I’d assumed Hockney would wipe the floor with Alan Davie in the same way that Munch did with Emin. In fact, it was probably a score draw, and I almost got the sense that Jarman had tried not to be Hockney and ended up more like Davie.

The exhibition that nearly wasn’t, thanks to COVID. One of the key early woman artists and it is easy to be drawn in by the horrors of her rape and the subsequent trial — but there is a solid career and a canny businesswoman at work. We were perhaps a little short changed by few portraits included — her bread and butter — and the altarpieces are a little off, but almost every picture is a masterpiece. I hope it reopens, but I fear not.

Tucked away on the ground floor of the National Gallery has been an exhibition devoted to Nicolaes Maes (1634-1693), an almost industrial producer of portraits – some 900, apparently – but earlier in his career better known genre pictures. In fact, such is the divide, that some critics have suggested there were two artists on the same name.

END_OF_DOCUMENT_TOKEN_TO_BE_REPLACED

George Shaw is that rare beast, a painter who has been nominated for the Turner Prize. I was enough lucky to see the exhibition at the BALTIC, Gateshead, and to my mind it was the best work.

I don’t mean that in a modern art is crap way. I like contemporary art. I just haven’t found myself agreeing with the winners that often. END_OF_DOCUMENT_TOKEN_TO_BE_REPLACED 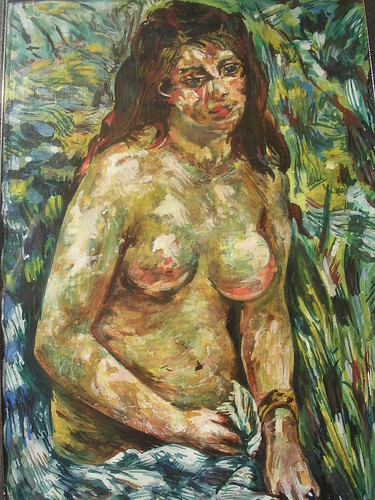